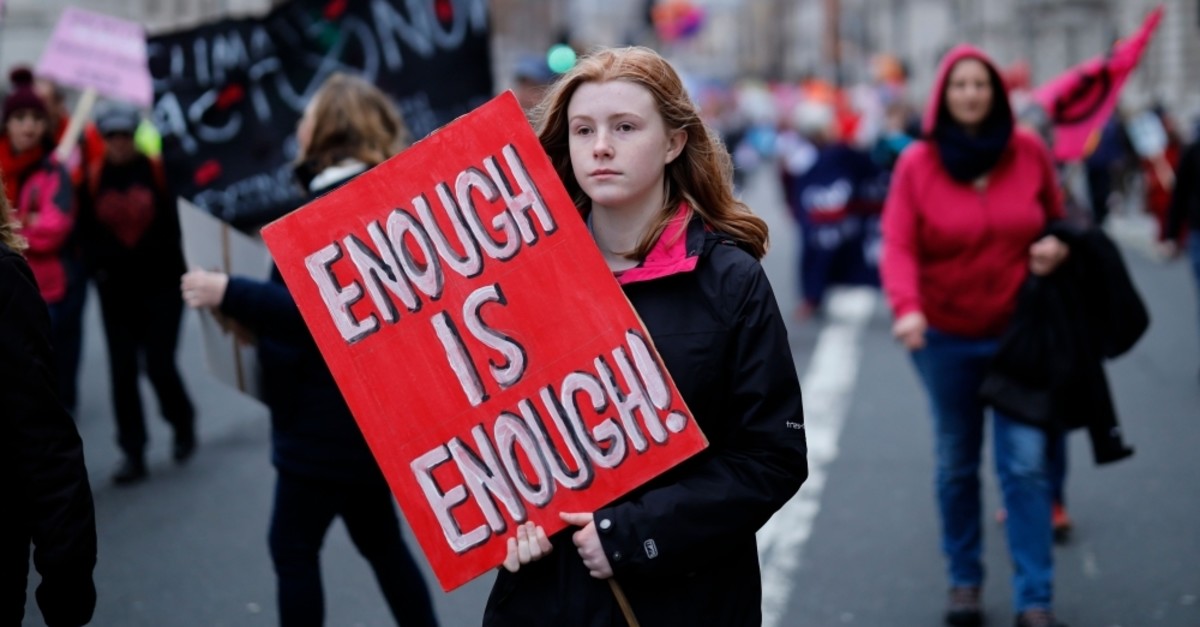 Climate activists hold placards as they march during a protest organized by the climate change action group Extinction Rebellion, in London, on Feb. 22, 2020. (AFP Photo)
by Reuters Feb 23, 2020 5:40 pm

The U.S. is against mentioning climate change in the communique of the world's financial leaders, G20 diplomats said, after a new draft of the joint statement showed the G20 is considering including it as a risk factor to growth.

Finance ministers and central bankers of the world's 20 biggest economies (G20) are discussing top global economic challenges on Saturday and Sunday in Riyadh, focusing on the growth outlook and new rules to tax global digital companies.

The G20 expects a modest pick-up in global growth this year and next, but noted downside risks to this outlook stemming from "... geopolitical and remaining trade tensions and policy uncertainty and macroeconomic risk related to environmental sustainability."

The latest draft communique gives less prominence to the outbreak of the coronavirus as a growth risk, saying only the G20 would ... " enhance global risk monitoring, including the recent outbreak of COVID-19," the medical acronym for the coronavirus.

G20 sources said the U.S. was refusing to accept language on climate change as a risk to the economy, and other delegates might ultimately have to revert to an earlier draft that did not include the climate language.

Discussions about the communique are due to resume early Sunday.

"Usually China blocks as well, but as they are represented at the lower level it's mainly the U.S.," one G20 diplomat said.

"Climate is the last sticking point in the communique. There is still no agreement," a second source familiar with the negotiations said.

Stephanie Segal, a former senior U.S. Treasury official and fellow at the Center for Strategic and International Studies, said there was another alternative to striking the climate change language – an agreement by all other nations.

"There's precedent for the 19+1 configuration, sad as that is, from Germany's G20 presidency," she said, referring to the July 2017 G20 summit when all leaders backed a single communique with pledges on trade, finance, energy and Africa, but Washington refused to back language on climate change.

"It would be a shame if the Saudis/others agreed to strike the language rather than fall back to 19+1," Segal said.

However, G20 host nation Saudi Arabia is keen to secure passage of a unanimous communique, and other countries that back the climate-change language are focused more heavily on resolving an impasse on global tax reforms, diplomats said.