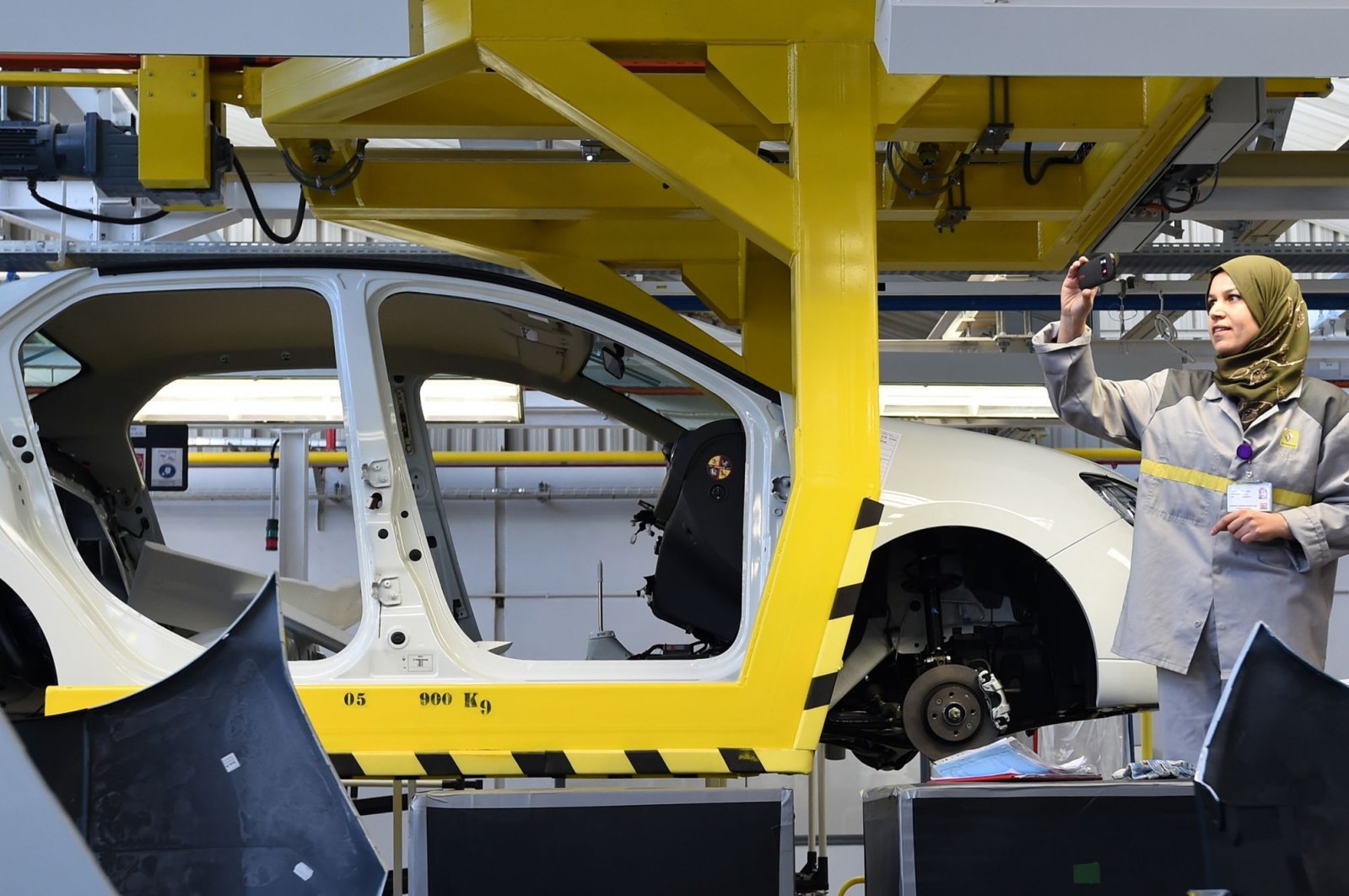 An employee of French carmaker Renault group takes a picture of a car on an assembly line during the inauguration of a new production plant, in Oued Tlelat, Oran, southern Algeria, Nov. 10, 2014. (AFP Photo)
by French Press Agency - AFP Feb 14, 2021 11:47 am
RECOMMENDED

The country’s recent years of political turmoil have also seen its foreign joint venture factories close and cronies of its ousted president Abdelaziz Bouteflika end up behind bars. Algeria’s dream of creating thousands of jobs has collapsed and the country is in dire need of new vehicles. The government is putting on a brave face.

Industry Minister Ferhat-Ait Ali pledged last month that it is “preparing the revival of this industry on solid foundations, which break with the practices of the past.”

Algeria’s auto industry was born in 2012 when French maker Renault partnered with the government in Algiers to build the first plant two years later near Oran, the country’s second-biggest city. Other companies followed suit.

South Korea’s Hyundai opened its assembly plant in 2016 in Tiaret, and Germany’s Volkswagen started operations the next year in Relizane.

The sector became a priority as the North African country sought to reduce imports, compete in the sector with regional rival Morocco and diversify its economy in the face of falling oil revenues, which had been the source of over 90% of its export earnings.

Morocco’s own bet on the automobile industry has paid off.

It is now the country’s top export sector after the Renault-Nissan group opened two factories in the kingdom in 2012 and 2019, followed by its rival Groupe PSA, which opened one in 2019, attracted by incentivizing fiscal and customs policies.

SKD units are partially stripped down at their origin and reassembled on arrival, requiring minimal labor input.

In July 2017, former industry minister Mahdjoub Bedda, who is now in prison on graft charges related to the wider scandal, suspended all new car assembly projects.

After Bouteflika, under pressure from mass demonstrations, was ousted by the army in April 2019, several assembly plant bosses were convicted of corruption.

His successor, President Abdelmadjid Tebboune, pledged to review the entire auto sector as soon as he came to power in December that year. “Some projects cannot be described as an industry because they are simply disguised imports,” he charged the day after his election.

Algeria then banned the import of spare parts for assembly plants, sounding the death knell for the young industry already struggling after the incarceration of its key executives.

In May 2020, the Algerian subsidiary of South Korea's Kia closed its assembly line, throwing 1,200 employees out of work.

The automobile scandal was at the heart of the first major corruption trials of the post-Bouteflika era.

They exposed that companies owned by tycoons linked to Bouteflika's inner circle were favored and benefited from undue privileges, such as state incentives and tax exemptions.

The scandal led to the imprisonment of former prime ministers Ahmed Ouyahia and Abdelmalek Sellal and two industry ministers.

The ex-premiers were convicted of “misappropriation of public funds, abuse of power and granting undue privileges” as well as illegal financing of ailing Bouteflika's aborted 2019 re-election bid.

Industry experts have, however, warned that such rules are unrealistic.

“It is illusory to claim to be setting up an automobile industry without (local) know-how,” said journalist Mourad Saadi, who has reported on the auto industry since 1999.

Saadi said the automobile assembly sector had failed mainly because Algeria lacks suppliers who can manufacture locally made parts.

Ali, the industry minister, already under fire for delays in drawing up the new rules, recently spoke of talks “with German and other global operators to launch a real industry for tourist and utility vehicles.”

For the moment, however, no manufacturers have taken the plunge back into Algeria.

Mohamed Yadadden, a former executive turned consultant, said setting up “a real production plant requires on average of five to 10 years to respond to the industrial challenges.”