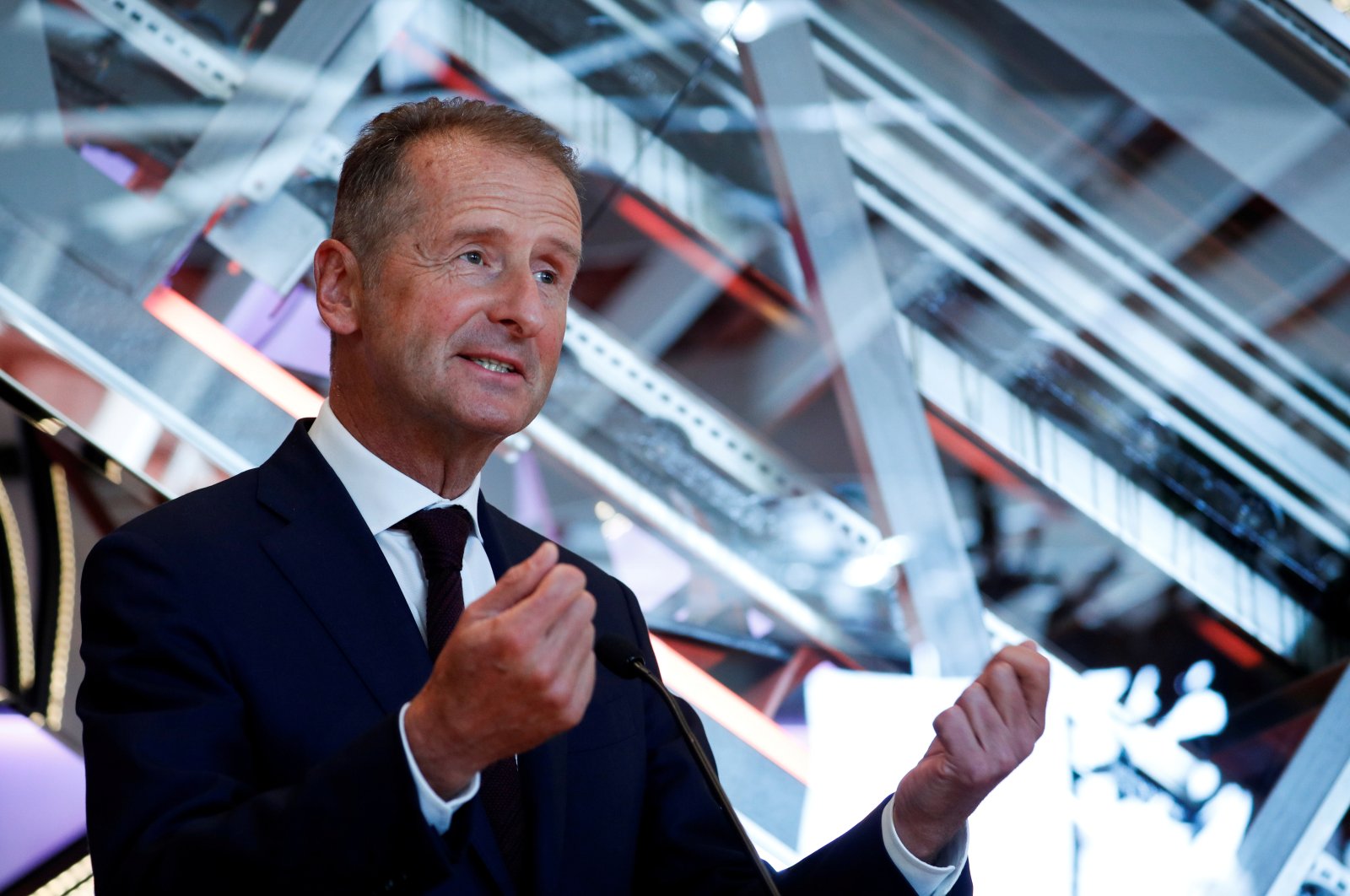 Volkswagen Group CEO Herbert Diess gestures as he speaks during a news conference to announce the appointment of Wayne Griffiths as the new president of Volkswagen's Spanish brand SEAT, in Barcelona, Spain, Sept. 23, 2020. (Reuters Photo)
by REUTERS Dec 01, 2020 2:58 pm
RECOMMENDED

Volkswagen, the world's largest vehicle maker by sales, risked a leadership crisis on Tuesday after Chief Executive Herbert Diess forced a vote of confidence in his reform efforts by asking for an early contract extension.

The multibrand car and truck maker is convening its executive committee to discuss Diess's demand for the contract extension, long before his current term comes to an end in 2023, three sources told Reuters on Monday.

Volkswagen Chairman Hans Dieter Poetsch is seeking to avert a clash between labor leaders and Diess by postponing discussions about a contract extension, a person familiar with the matter said.

Diess, who defected from BMW in 2015, and helped Volkswagen reform after its diesel scandal with a 73 billion euro ($87 billion) electric vehicle investment plan, has grown frustrated with German labor leaders blocking cost cuts.

The supervisory board's executive committee, which is headed by Poetsch, and includes Wolfgang Porsche and Hans Michel Piech, members of the carmaker's owner families, as well as labor boss Bernd Osterloh, is due to meet on Tuesday, the three sources told Reuters.

"The families continue to support Diess," a spokesperson for Porsche Automobil Holding SE, the company which holds a majority voting stake in Volkswagen, said Tuesday.

The meeting comes on the day Tesla CEO Elon Musk is due to receive the Axel Springer Award in Berlin for his achievements in engineering after the electric carmaker decided to build a factory on the outskirts of the German capital.

Analysts said the Volkswagen committee meeting highlighted the difficulties in reforming a carmaker where labor representatives control half the seats on the board of directors and local politicians have a 20% voting stake, allowing them to vote down significant strategic reform proposals.

"The company has some of the most amazing and most global brands. It has the scale to deploy any technology and the innovation power to be an early mover. What it appears to be lacking is the right corporate governance," Bernstein autos analyst Arndt Ellinghorst said in a note late Monday.

"There should be no illusion. This transformation will always trigger conflicts. Whether there is a new CEO or not, the questions will remain the same, and any VW CEO will need the full backing from VW's largest shareholders, the Porsche families."

Volkswagen is worth 77.2 billion euros, far below rival Toyota's market value of $155.7 billion and Tesla's $555 billion.

And that's despite the fact that Volkswagen sold 10.96 million vehicles last year – the most by any carmaker in the world, while Toyota came in second with 10.74 million. Tesla sold only 367,500 cars in the same period.

Analysts say that's because Volkswagen is less efficient and has higher costs. Volkswagen Group had 671,205 employees at the end of 2019, compared with 359,542 at Toyota at the end of its fiscal year, and 48,016 at Tesla last year.

German companies customarily deliberate contract extensions for management board members only a year ahead of expiration. Diess, however, forced the issue after labor leader Bernd Osterloh stifled his reform efforts.

These included Diess's attempts to install allies Arno Antlitz as chief financial officer and Thomas Schmall as chief procurement officer on the management board, the three sources told Reuters.

Rather than approving each individual appointment, the labor leaders insist on approving a "package solution" that is "harmonious," two people familiar with the deliberations said.

Osterloh is also said to oppose an early contract extension for Diess, one of the three sources said.

In a post on LinkedIn this week, Osterloh said there was no fight about management appointments because no committee on the supervisory board had been formally consulted about the issue.

Diess, for his part, voiced his frustration in a column in the German daily Handelsblatt published on Friday.

"When I took office in Wolfsburg, I had firmly resolved to change the VW system. This meant breaking up old, encrusted structures and making the company more agile and modern," he said.

"Together with many companions with the same level of motivation, I succeeded in doing this in many places but not in some, especially not yet at our corporate headquarters in Wolfsburg."