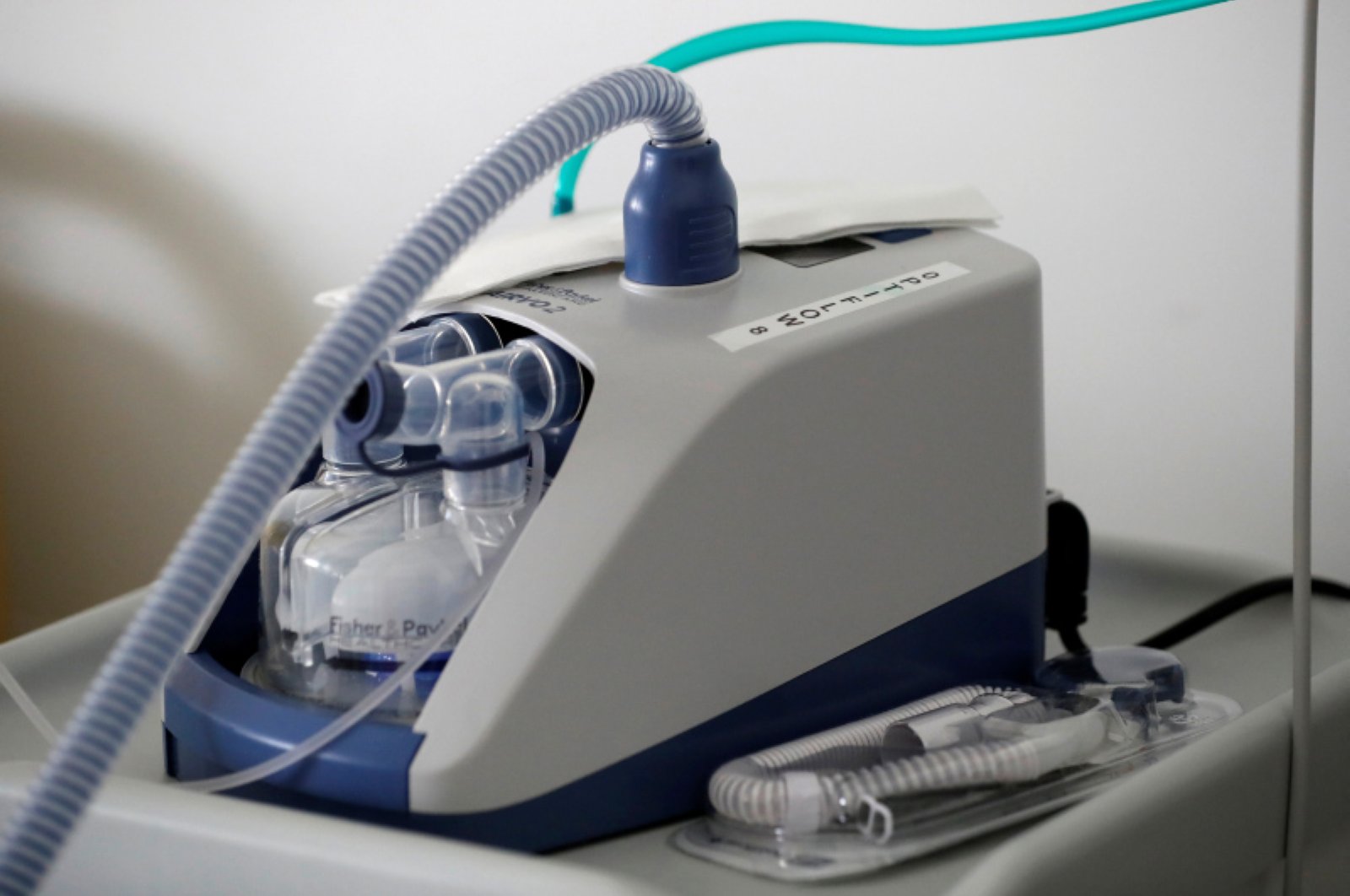 A nasal ventilator is pictured as a patient suffering from coronavirus disease (COVID-19) is treated in a pulmonology unit at the hospital in Vannes, France, Friday, March 20, 2020. (Reuters Photo)
by Daily Sabah with Agencies Mar 24, 2020 1:02 pm
Edited By Alen Lepan
RECOMMENDED

More auto brands have announced they would produce ventilators for patients suffering from COVID-19, the disease caused by the new coronavirus, while Tesla is delivering the first batch of its products.

General Motors, Ford and Tesla are preparing to use some of their production capacities in the U.S. to support the efforts to combat the pandemic, media reports said Tuesday, confirming the previous announcements.

The step by automakers came after the U.S. Food and Drug Administration (FDA) announced that it would alleviate the procurement and criteria for the production of medical devices to increase respiratory equipment production.

"Medical device manufacturers will be able to make material and supplier changes much more easily as a solution to current production restrictions and supply shortages. Other manufacturers, such as automotive companies, can easily transform production lines to increase supply," said U.S. Health Minister Alex Azar.

“Some 1,000 ventilators produced by Tesla co-founder Elon Musk had arrived in Los Angeles, and Musk was working with the hospital association to distribute them,” California Gov. Gavin Newsom told a news conference Monday.

Governors and mayors across the U.S. have become increasingly desperate in their pleas for help from the federal government to fight the pandemic. The U.S. military prepared to set up field hospitals in New York and Seattle – the two hardest-hit U.S. cities – to ease the strain on overwhelmed health services.

Baykar will donate these devices for government use in hospitals or send it to friendly nations, Bayraktar said on Twitter.

"I invite all our Teknofest stakeholders and those who want to contribute, to participate in this campaign as much as possible, during a period when the importance of developing domestic and national technologies is revealed," he added.

After the invitation, Turkey's defense giants Aselsan and Havelsan, as well as the aviation company, TAI, announced that they would also support BIOSYS.

"We have decided to not only order the device but also to provide engineering and infrastructure support to all domestic and national companies, which are working on productions in this field," he said.

TAI will also participate in the campaign, Temel Kotil, the head of the company, announced.

Representatives of teams competing in Formula One races in the U.K. said last week that they were ready to provide technology, design and production support to governments and health care institutions to contribute to the production of medical equipment.

Meanwhile, Indian automotive company Mahindra Group, one of the largest tractor manufacturers in the world, has announced that it has started working to produce respirators in its factories.

Emerged late last year in China and spread around the world since, the coronavirus has infected more than 380,000 people so far. More than 16,000 people died due to the pandemic worldwide while it is estimated that the stock of respiratory support devices, which is essential for the survival of patients with advanced clinical status, with the increase in the number of the cases, will be insufficient in even countries with the most developed health systems.