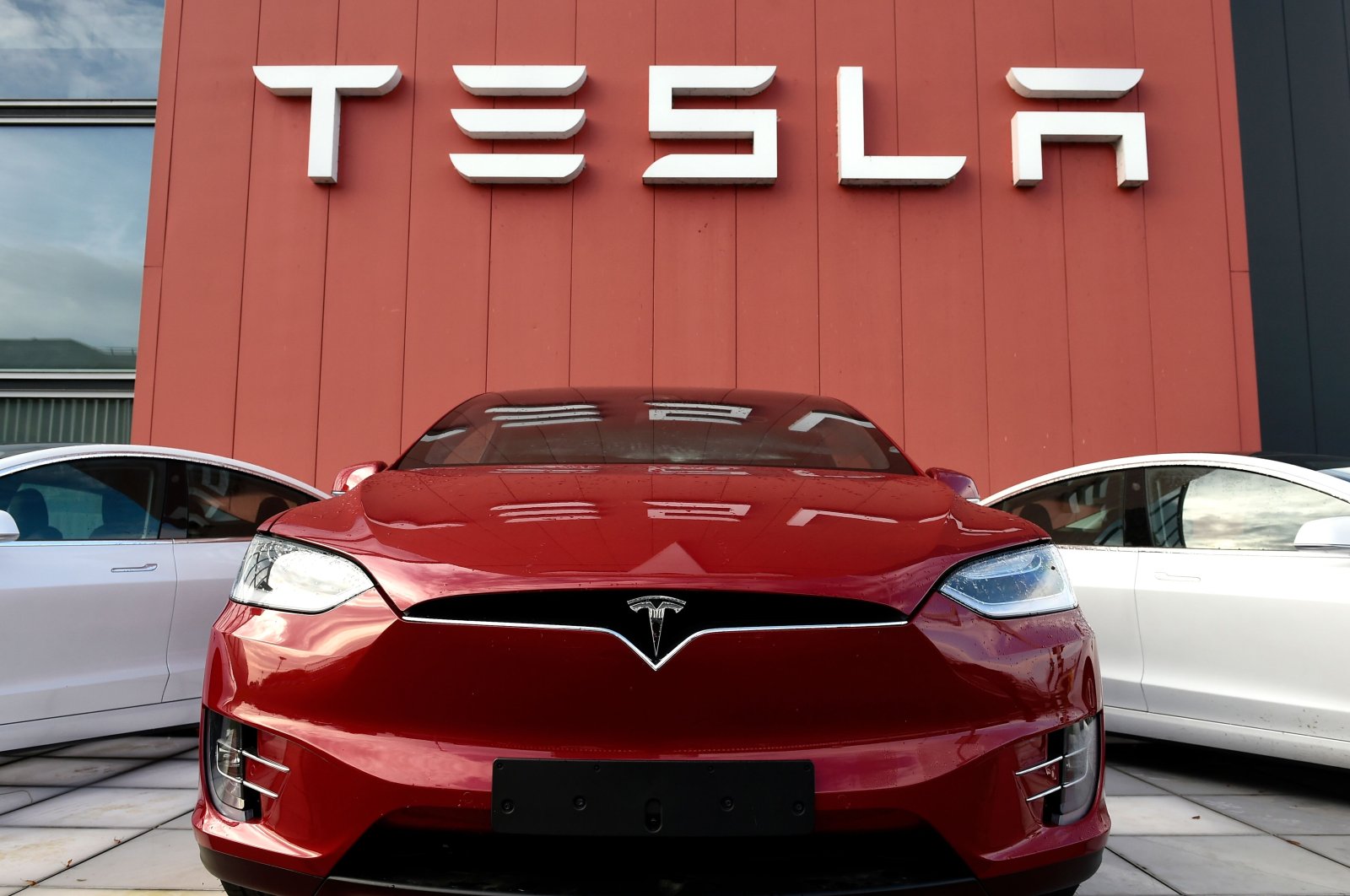 The Tesla logo marks the showroom and service center for the U.S. automotive and energy company Tesla in Amsterdam, the Netherlands, Oct. 23, 2019. (AFP Photo)
by ASSOCIATED PRESS Jul 23, 2020 9:02 am
RECOMMENDED

Tesla overcame a seven-week pandemic-related shutdown at its California assembly plant to post a surprising $104 million net profit for the second quarter.

It was the electric car and solar panel maker’s fourth-straight profitable quarter, qualifying it to be included in the S&P 500 index of corporate titans. That decision will be made later.

Local government restrictions forced Tesla to close its only U.S. assembly factory in Fremont, California, from March 23 to May 11. Even with no production, the company paid roughly 10,000 workers for part of the shutdown, and Tesla continued health care and other benefits.

But the company likely would have lost money without $428 million it earned from selling electric vehicle credits to other automakers so they can meet government fuel economy and pollution regulations.

Chief Financial Officer Zachary Kirkhorn said he expects money from the credits to double this year over the $594 million the company made in 2019, but said Tesla is not managing its business assuming that credits will contribute significantly in the future. The company is counting on manufacturing efficiencies to increase profits, he said.

Also Wednesday, Tesla said it has picked the Austin, Texas, area as the site for its second U.S. assembly plant. Austin was the front runner, but Tulsa, Oklahoma, was a possibility.

On a conference call with analysts and investors, CEO Elon Musk said that sometime in the future, Tesla will build a compact vehicle and a higher-capacity passenger vehicle, but he did not give a time frame. He said Tesla is on its way to making vehicles more affordable through manufacturing and design efficiencies.

"The thing that bugs me the most about where we are right now is that our cars are not affordable enough," he said.

Musk also said he is confident about rolling out full self-driving technology by the end of the year and said it already works well during his drives to work. The company based in Palo Alto, California, has updated its Autopilot driver-assist software to recognize stop signs and is working on navigating intersections and city streets, he said.

Last year he predicted Tesla would get regulatory approval from a few states by the end of 2020 for autonomous vehicles to drive on roads. A ride-hailing service involving millions of Tesla autonomous vehicles now seems to be farther into the future, with Musk saying it will depend on regulators.

Critics have said Tesla does not have the right sensors to fully automate driving. The National Transportation Safety Board has blamed two fatal crashes in part on Autopilot. In both crashes, the system failed to spot tractor-trailers crossing in front of a Tesla. The company would use the same sensors that Autopilot uses for its self-driving system, but with vastly increased computing power. Tesla says drivers always have to pay attention while using Autopilot.

Excluding one-time items such as $347 million in stock-based compensation, Tesla made $2.18 per share. That beat Wall Street estimates of a break-even quarter, according to FactSet. Revenue was down 4.9% from a year ago to $6.04 billion. That still beat estimates of $5.15 billion.

Most of that stock compensation went to Musk, who earned a payout of around $700 million in May and on Tuesday became eligible for another $2.1 billion, all based largely on Tesla's four-fold stock price growth this year.

But Tesla issued a note of caution in its investor letter released Wednesday after the markets closed: "It remains difficult to predict whether there will be further operational interruptions or how global consumer sentiment will evolve in the second half of 2020."

Musk also said demand for Tesla's vehicles is not a problem, but the company is facing struggles with its parts supply chain.

"As long as they can keep getting credit revenue and they have new offerings ramping up like the Y, they have a chance at a continued profit," he said. "Profit without the credits needs more volume though."

Tesla said it should have enough money to fund new products and to build two new factories in the U.S. and Germany, as well as cover other expenses. The company said it would begin delivering its electric semi next year.

Tesla generated $964 million in cash from its operations from April through June, and it ended the quarter with about $9.1 billion in cash. But it also had $8.5 billion in debts, according to financial statements.

Tesla’s second-quarter profit came after it announced better-than-expected global sales during the period. The company said it delivered 90,650 vehicles from April through June as it rolled out the new Model Y SUV in the U.S. and China. That is a 2.5% increase over the first quarter’s 88,400, but was a 4.8% drop from the second quarter of 2019.