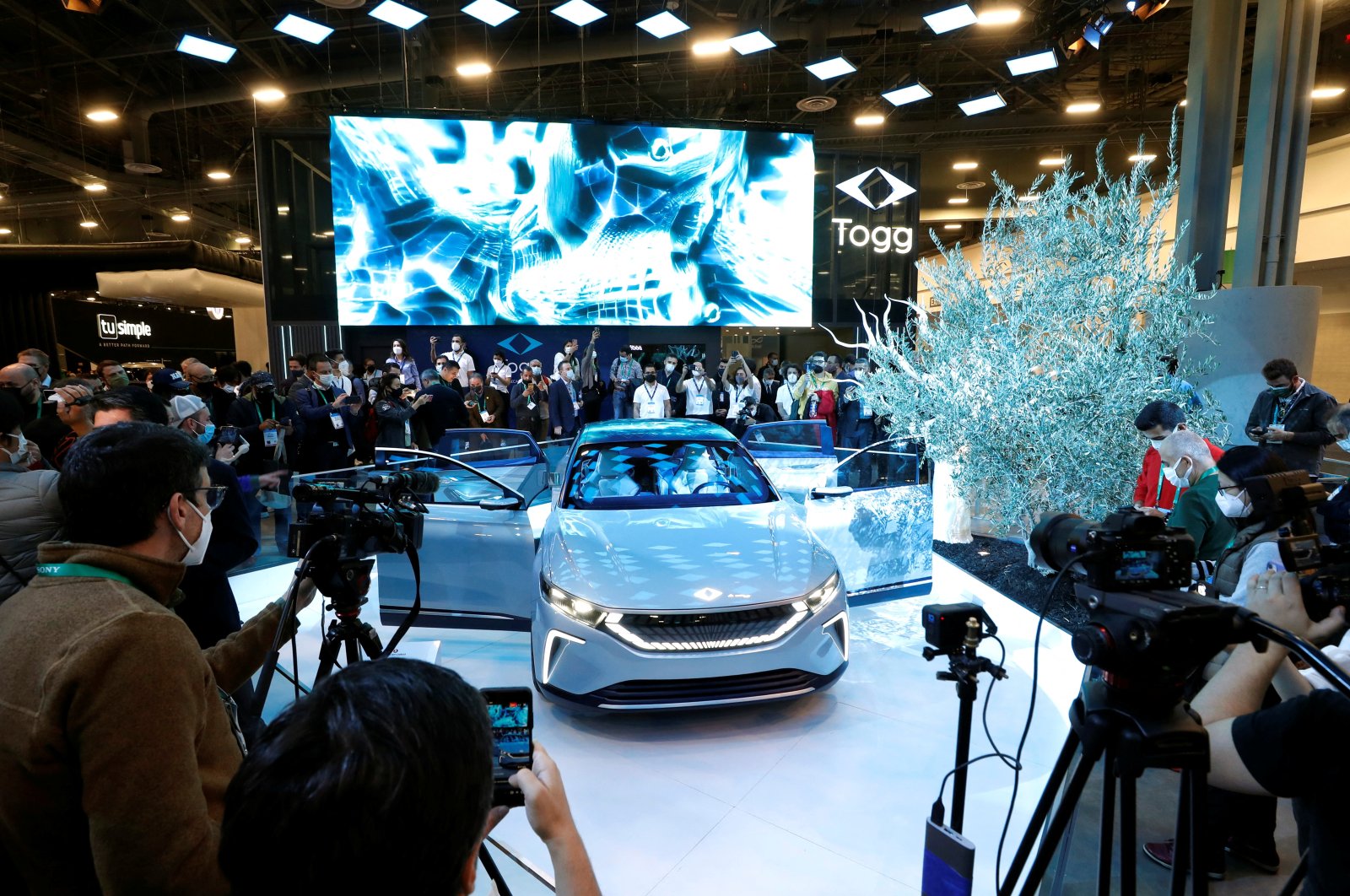 Attendees and journalists check out Togg's "Transition Concept" electric vehicle after it is unveiled during CES 2022 at the Las Vegas Convention Center in Las Vegas, Nevada, U.S., Jan. 5, 2022. (Reuters Photo)
by Daily Sabah with Agencies Jan 06, 2022 12:23 am
RECOMMENDED

Turkey’s first domestically produced car made its international debut at one of the world’s largest technology and gadget fairs, which opened its doors on Wednesday.

Thousands of people have gathered in Las Vegas for the Consumer Electronics Show (CES), which has been scaled back because of COVID-19 pandemic precautions.

It was not immediately clear if the fastback is intended to replace the previously seen compact sedan or was created just for CES.

"We define ourselves as a technology company," Karakaş told a press conference at the event. "That is why we are at CES, the gathering place for the latest technological innovations and firsts."

The illuminated Togg logo, meanwhile, is unique to the car and represents the unification of Eastern and Western cultures.

“The two arrows in the logo design represent the fusion of East and West, forming a gemstone in the center,” said Karakaş.

“Additionally, our logo emphasizes that Togg is a technology company that connects technology and people at the juncture of today and tomorrow through its life-improving mobility solutions.”

Inside, the fastback features a sporty steering wheel, four single seats with seatbelts integrated within them, and a plethora of infotainment screens.

Karakaş said that Togg’s technologies, brought together under the "Smart Life" platform, encompass much more than a fully connected car.

"We’re building Togg with a completely user-centric approach. If a product doesn’t create user value, it will not survive," Karakaş noted. "We are creating mobility solutions through a business model that's user-centric and data-driven. We’re developing solutions that will enable a more comfortable mobility experience through the ecosystem, and that will grow around our smart device."

"The Use-Case Mobility concept, which embodies these characteristics, has been registered all around the world. We worked on over 350 use cases and came up with over 40 innovative ideas," Karakaş added.

“More than 2,000 people took part in quantitative research, including more than 30 focus groups and interviews. A 'User Journey Map' was developed based on the concepts we prioritized."

"We aim to supply batteries for all types of electric vehicles and to establish a presence in non-automotive sectors as a battery and energy storage systems provider," Karakaş said.

Togg’s aims to produce one million vehicles in five different segments by 2030.

“By the end of 2022, we will launch our first mass-production vehicle,” Karakaş said.

“Our first vehicle in the C-segment, the SUV, will be launched in the first quarter of 2023 following the completion of homologation tests. It will be the first electric SUV produced in continental Europe by a nontraditional manufacturer.”

Togg was launched on June 25, 2018, and is led by Karakaş, the former tech-giant Bosch executive who was appointed CEO in 2018.

President Recep Tayyip Erdoğan, in December 2019, unveiled prototypes for the SUV and a sedan, both fully electric and C-segment models.

Togg said it would produce five different models – an SUV, sedan, C-hatchback, B-SUV and B-MPV – through 2030. Mass production of the SUV will begin by the end of this year, with the sedan to follow.

Construction of Togg’s engineering, design and production facilities began on July 18, 2020. Built on an area of 1.2 million square meters (12.9 million square feet) in the Gemlik district of northwestern Bursa province, the facility is scheduled to be complete in the coming months.

Togg has opted for advanced lithium-ion battery technology company Farasis as its business partner for the battery. The homegrown car can reach 80% charge in under 30 minutes with fast charging. It will have a range of between 300 kilometers to 500 kilometers (186 miles to 310 miles).