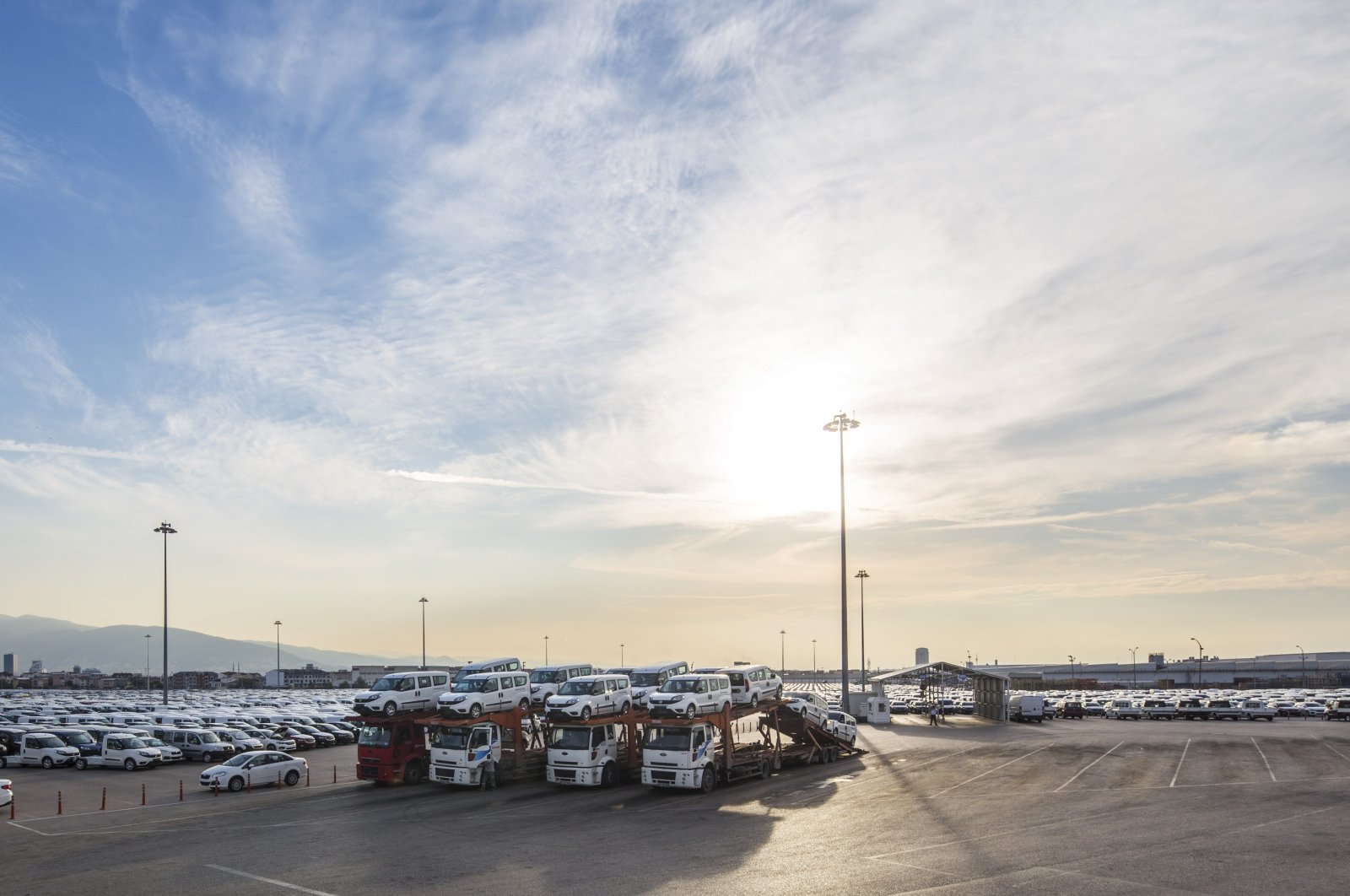 Vehicles manufactured at the Bursa factory of Tofaş, a joint venture of Turkey's Koç Holding and Italy's Fiat Chrysler, are seen in the shipment area. (Photo courtesy of Tofaş)
by DAILY SABAH May 11, 2020 4:01 pm

Sales in Turkey declined by 14.4% in April, compared to collapses of 98% in Italy, 97% in Britain and Spain, 89% in France and 61% in Germany, as measures to contain the pandemic forced production lines to halt and showrooms to close

Auto sales in Turkey have managed to post a 26.3% year-on-year increase from January to April, with a moderate decline of 14.6% in April, a month in which most countries saw sales wiped out by the coronavirus pandemic.

The passenger car and light commercial vehicle sales market in Turkey reached 150,860 units in the first four months compared to a year earlier, according to Automotive Distributors Association (ODD) data.

Car sales across the world have slumped as measures to contain the pandemic forced production lines to shut down and showrooms to close and put forth a gloomy outlook that underlines the challenges being faced by the global automotive industry as it struggles to emerge from a prolonged slump in demand.

All major automotive factories in Turkey were to resume production on Monday, after they had to suspend operations due to measures to stem the spread of the virus.

Sales in Germany plunged 61% year-on-year. At 120,840, the sales figure from the KBA road transport authority was the lowest monthly reading since German reunification in 1990.

New car sales in Britain slumped to the lowest level of any month since February 1946. Figures from the Society of Motor Manufacturers and Traders (SMMT) showed only 4,321 cars were registered, the lowest monthly level since 1946, compared with 161,000 cars in the same month of 2019.

The SMMT further downgraded its full-year forecast to 1.68 million sales, on track for a near 30-year low. In January, it had forecast 2.25 million sales.

There were virtually no new car sales in April in Spain as new car registrations fell 97% from a year earlier to their lowest in 20 years as car dealerships were closed. The 4,163 vehicles registered were mostly completions of sales done before the lockdown.

Across all sales channels in Italy, there were only 2,182 registrations, down from 107,930 the year prior, according to Automotive News Europe.

On the other hand, sales in the United States plunged 60% in the month, while in another major global market, India, zero cars were delivered. In 2019, nearly 3.29 million units were sold in the country.

China’s monthly auto sales rose for the first time in almost two years as the country eased virus-related curbs and reopened for business.

Even if China contains the outbreak effectively, its auto sales are expected to drop 15% this year, from over 25 million units in 2019, the CAAM said.

Industry representatives have said in Turkey, there is a demand postponed for the last two years that has contributed to the performance and could lead to a boost in sales in the coming period.

Turkish consumers are also keeping alive the demand by making early purchases as they estimate auto prices will increase in the market. People are also avoiding public transportation due to the pandemic, shifting the demand toward car purchases.

The industry in Turkey had faced multiple problems after high volatility in foreign exchange rates in the second half of 2018, followed by a high increase in interest rates on loans, which led to a sharp decline in domestic demand.

The increase in the first four months follows an upward trend that started in September 2019 amid a drop in borrowing costs since the Central Bank of the Republic of Turkey (CBRT) started slashing interest rates in July.

A decline in inflation allowed the CBRT, which had hiked its key policy rate to 24%, where it stayed until last July, to slash rates by 1,525 basis points down to 8.75% since then to boost growth.

It was followed by a campaign initiated by public lenders in late September to spur domestic demand by offering cheaper loans to citizens when buying domestically produced vehicles from select manufacturers.