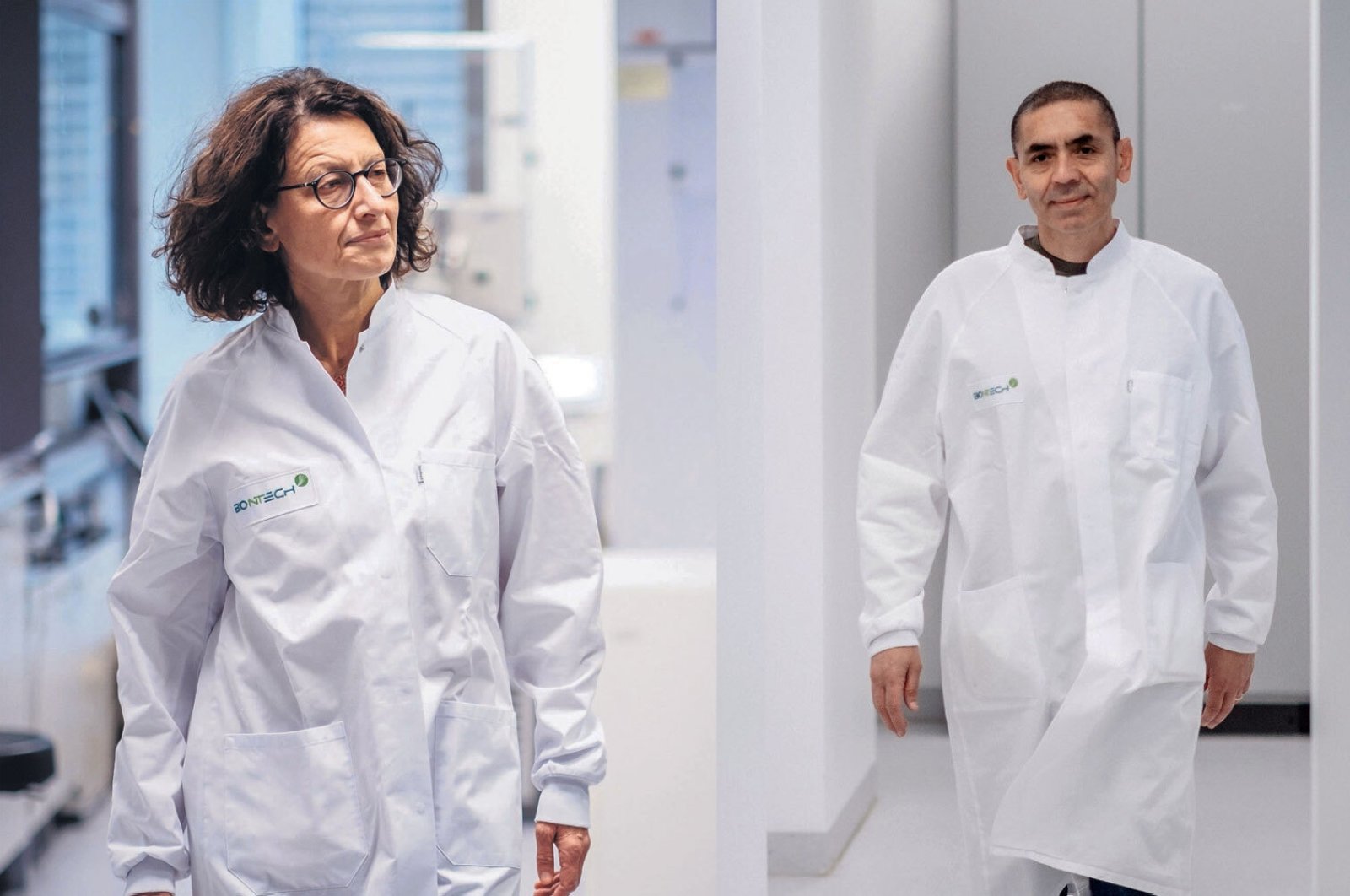 Özlem Türeci, chief medical officer of Biontech, and Uğur Şahin, CEO and co-founder of the company walk through one of the company's laboratories in file photos provided on Sept. 2, 2020 and Nov. 12, 2020, respectively. (Photos by DPA and DHA)
by DAILY SABAH Nov 15, 2020 3:02 pm
RECOMMENDED

A German-Turkish couple has been dubbed the "dream team" that will save humanity from the COVID-19 pandemic that brought the world to its knees since its initial emergence in China. The couple co-founded the firm BioNTech which is making positive strides in developing a vaccine with its U.S. partner Pfizer.

The duo had already been working on other diseases that needed challenging treatments, like cancer. BioNTech, with the slogan "We will change the paradigm in cancer treatment," was working on vaccines using mRNA (messenger RNA) technology against cancer. The company is now using the same technology in COVID-19 vaccine development, and it will be the first such vaccine on the market if approved.

BioNTech Chief Executive Uğur Şahin told INBUSINESS in a recent interview that those studies were started at the very beginning of the outbreak when he realized what kind of a threat the world would face while reading an article on the disease’s progression in China.

The son of a Turkish immigrant working at a Ford factory in Germany’s Cologne, Şahin established BioNTech with his wife and fellow board member Özlem Türeci.

“I was worried that the epidemic in China could become a global pandemic," said Şahin, as the SARS-CoV-2 met all the criteria of a pandemic.

“It was from the SARS family that nearly caused a pandemic before. It could spread very rapidly within a short incubation period, had a high penetration, and there were both asymptomatic and severe patients. All of them can be seen in the article describing infections in multiple members of a Chinese family traveling to Wuhan,” he said.

Wuhan's train lines and international airport connecting it to other major cities in China would accelerate the already rapid spread, and the virus would spread to several parts of the world in just a few weeks, Şahin predicted at the time.

Thus, in January, the company started working to develop the mRNA technology against the pandemic, the same technology they were already working with for the treatment of cancer and flu. In the first week of March, they created the first vaccine candidates, when they saw a strong immune response against the virus in animal and cell experiments in the laboratory.

If the COVID-19 vaccine, which will be provided strong support on the production and distribution side by Pfizer, is approved this fall, as expected, it will be the first mRNA vaccine to be proven effective, unless their U.S. rival Moderna, working on a vaccine developed with mRNA technology, succeeds before them. Either way, it will be welcome news for the rest of the world.

So far, there is no vaccine developed with mRNA and approved to be put on the market.

There are vaccines that, unlike mRNA, require working with the virus itself. The mRNA technology used by Moderna and BioNTech seeks to turn the human's cells into vaccine factories against the virus, just like cancer drugs that aim to destroy cancer cells by activating the immune system – a subject that Şahin and Türeci have already been working on for many years. The RNA is fragile and can be broken down by many enzymes in the body. The immune system immediately detects foreign RNAs and destroys them before the RNA can trigger the production of a protein against the virus it targets in human cells. However, researchers have modified the mRNA molecule to make it more resistant to the immune system.
This is the technology at the heart of BioNTech's new research. From this point of view, if the COVID-19 vaccine becomes successful, all other mRNA-based research will find both more support and more resources from the world of science. BioNTech's development of an effective COVID-19 vaccine would not only end the pandemic but herald new treatment possibilities in the field of cancer.

Though sharing the same professional field, the married couple came from different socioeconomic backgrounds. While Şahin is the son of a car factory worker who immigrated to Germany from Turkey’s Iskenderun on the southern border, Türeci, BioNTech’s chief medical officer, is the daughter of a Turkish physician who emigrated to Germany from Istanbul.

Growing up influenced by her father, Türeci said in an interview with the BBC: "I could not imagine any other profession even when I was a young girl.”

Before establishing BioNTech in 2008, Şahin and Türeci initially formed Ganymed in 2000, where they tried outlandish treatments for cancer, namely methods that excluded the ones like chemotherapy and focused on strengthening the immune system to fight on its own. The Ganymed was sold to Japanese pharmaceutical giant Astellas for $460 million in 2016.

When speaking of their research, Türeci, 53, who has described herself as a “Prussian Turk” in several interviews, said at the time the notion of treating cancer with anything other than surgery, radiation and chemotherapy seemed unusual.

“It took a long time to become accepted that the immune system is a very potent tool to fight cancer,” Türeci said in 2017.

“I started working in the leukemia department of the University of Cologne, then spent eight years at the University of Saarland dealing with hematology-oncology patients during the day and working in the lab at night. Back then, chemotherapy and radiation therapy were helping patients live longer than a year. However, 95% of patients with metastatic cancer eventually succumbed to the disease. I wanted to improve these possibilities, and it seemed that the only way to bring the science I was working on to patients was to establish my own company,” Şahin said in an interview with INBUSINESS.

Şahin and Türeci continued to work on the idea of using the immune system against tumors instead of chemotherapy drugs, which are based on the logic of destroying cancerous cells by drowning the body in venom.

BioNTech's research has been followed with great interest in the scope of incurable diseases since the first years of its establishment and has quickly become known worldwide and followed carefully by pharmaceutical companies. In October 2019, the value of BioNTech, which was offered to the public on the New York Stock Exchange in the United States with a market value of $3.39 billion, has now exceeded $22 billion.

BioNTech has solved the "mass production" issue, which is the most important question of vaccine studies, in which many developed countries from the U.S., Russia, China, Japan, the U.K. and Germany are in a relentless race, with its partnership with Pfizer.

BioNTech and Pfizer started production when the vaccine was still in the third and final clinical trial phase, where it was tested on 44,000 people.

Pfizer CEO Albert Bourla told INBUSINESS that their goal is to make the vaccine available to the world as soon as possible and in the widest possible way.

Pfizer will pay an additional $563 million to BioNTech if everything goes as planned and a successful vaccine is developed. The two companies continue to negotiate with about 30 countries regarding the procurement of the vaccine. They made a $1.95 billion deal with the U.S. government for a 100 million-dose vaccine option. The deal also includes an option to add 500 million doses. They signed an undisclosed contract with Japan for 120 million, with Britain for 30 million and with the European Union for 200 million doses of the vaccine with an additional option of 100 million doses. In addition, they continue to negotiate with the COVAX initiative, which was created with the World Health Organization (WHO) to deliver the vaccine to the whole world, including poorer countries.

The Pfizer CEO continued: “We first started working with BioNTech two years ago to develop a better flu vaccine. This study provided us with a great basis for addressing the pandemic in parallel with health authorities around the world. In collaboration with BioNTech, Pfizer is working at an unprecedented pace to develop, test and manufacture the first mRNA-based vaccine in its field that aims to help prevent COVID-19 disease.”

The Mainz-based company has also cooperated with Fosun Farma in China. If the vaccine gets approved, Fosun and BioNTech will share the revenue from sales in China. Fosun made a $51 million down payment and capital investment in April.

BioNTech has so far received the largest investment ever seen by a European biotechnology company and raised $325 million from investors, including famous twin investors in Germany, Thomas and Andreas Struengmann. The total investments it received approached $1 billion. Struengmann Brothers were also among the investors of Ganymed.

Mask to stay a bit longer

Şahin said that despite the recent positive developments, the struggle against the virus is not over.

“We have to be patient. A harsh winter awaits us, where infection cases will continue to increase. The only way to deal with this is to stick to social distance rules and wear a mask when several people are in the same room,” he said.

Şahin added that although they started production of the vaccine this year, he believes that the available doses will be limited and will only be administered to risky groups such as health care workers and the elderly in the first months.

“I guess that it will take another six months for the vaccines to become accessible to a wider population. If everything goes as planned, normalization of life will begin in May/June of 2021. However, for the pandemic to be fully controlled, it may take another year, above that. I believe that the pandemic can end only when 90% of the world's population becomes immune to the virus, which may take years.”

Before BioNTech, founded in 2008, started working to develop a vaccine against COVID-19 in January, there were mainly vaccines to be used in cancer treatment with mRNA technology in the production line. Vaccine candidates for the treatment of prostate, advanced melanoma, HPV, head and neck cancer and ovarian cancer (BNT111, BNT113, BNT114, BNT112 and BNT 115) in Phase 1. Others (advanced melanoma and HPV positive head and neck cancer) are about to move on to the second stage. The Bill & Melinda Gates Foundation has supported some of its research for treatments in the field of HIV and tuberculosis, joint work with Pfizer to develop a seasonal influenza vaccine, and ongoing research in the preclinical phase with the University of Pennsylvania for more than 10 infectious diseases.