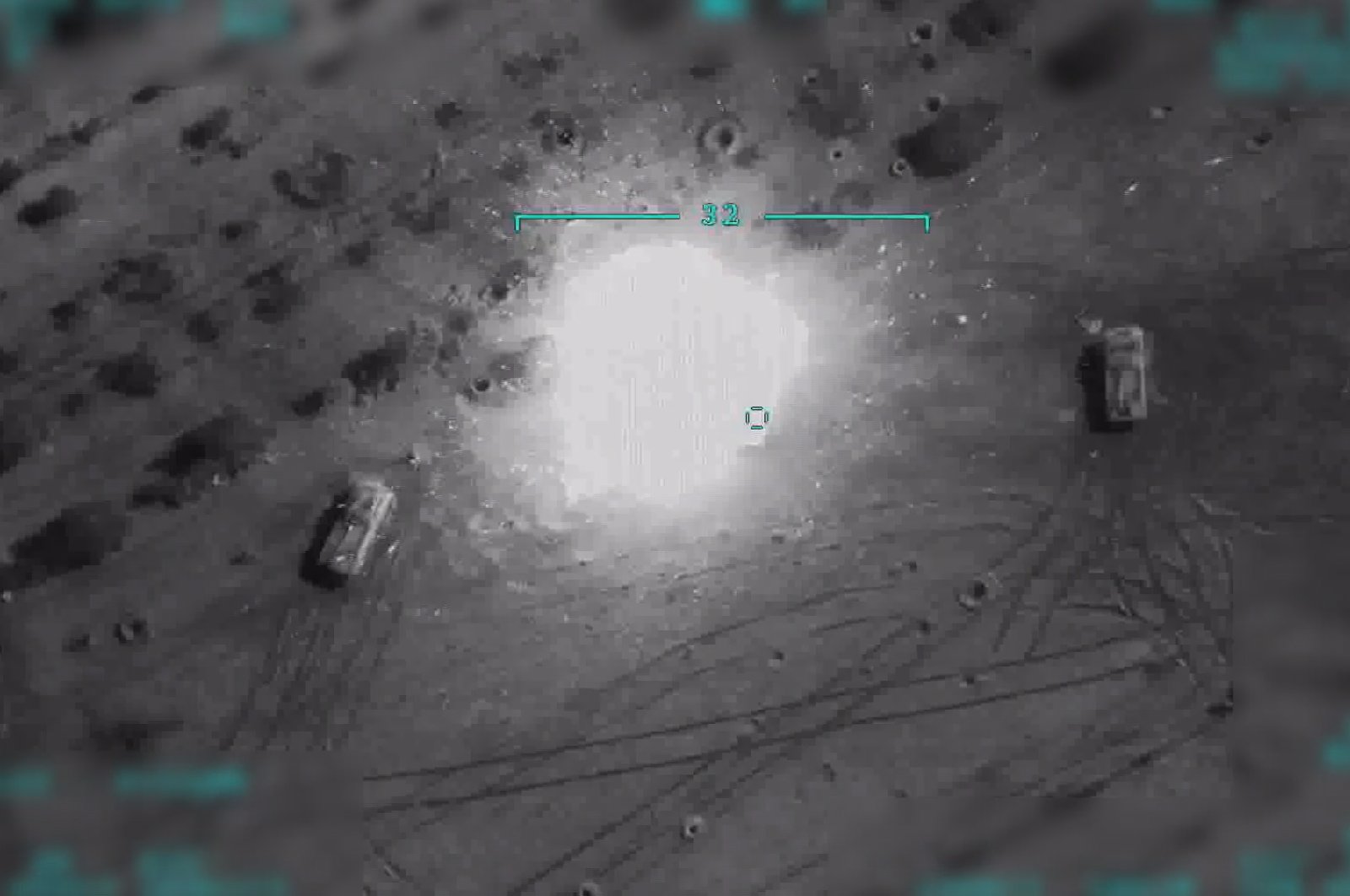 The expanded air campaign against the Bashar Assad regime in northwestern Syria’s Idlib run entirely by locally developed armed drones is said to have showcased Ankara’s technology prowess and its aerial firepower on the battlefield and is seen by some as a factor that has shaped conditions in the area.

Prompted by an Assad regime attack last week that martyred 34 Turkish soldiers and injured dozens of others in a de-escalation zone in northwestern Syria, just across from Turkey's southern border, coordinated retaliatory strikes by swarms of armed Turkish-made drones ended up causing significant damage to Assad regime elements, hitting everything from tanks and air missile defense systems to howitzers as well as military bases and chemical warfare depots.

The series of strikes since last Thursday involved an unprecedented number of drones in a coordinated action, a senior official in Turkey with direct knowledge of President Recep Tayyip Erdoğan’s Syria policy told Bloomberg.

It was the first time a country had commanded the airspace over such a large area using drone swarms, the official was cited as saying.

The official said the deployment of such a large number of armed drones was military innovation that demonstrated Ankara’s technological prowess on the battlefield.

Among a large amount of video footage, including a series of those posted on Twitter by the Defense Ministry, showing Turkish drones strikes targeting a range of regime assets, the one showing a domestically developed Bayraktar TB2 armed drone striking an apparently active Russian-made Panstir S-1 air defense system deployed inside Idlib went viral on social media.

The clip shows Pantsir S-1 mounted on its eight-wheel-drive truck sitting placidly as the MAM-L smart ammunition projectile, developed by leading defense company ROKETSAN and fired from Bayraktar TB2, barrels toward it. The apparently active system failed to detect the incoming missile or possibly the drone that was flying over the range of the radar.

“This is pretty extraordinary stuff,” Charles Lister, director of the Extremism and Counterterrorism Program at the Middle East Institute, said in reference to the video footage on his Twitter account.

“The #SAA's #Russia-made Pantsir S1 is clearly operational (it's visibly scanning), and yet the very thing it's meant to detect & shoot down (a drone) ends up flying right above its head & taking it out,” Lister said.

“That’s something only #Israel had been recorded publicly to have done until now,” he added.

The annihilation is also said to have raised questions about the effectiveness of the Russian-made equipment intended to deter such air attacks.

“If #Turkey keeps this tempo up – focusing on strategic targets & heavy weapons – then power dynamics on the ground will begin to shift,” Lister said.

In a series of tweets Sunday, he also remarked the regime’s attempts to reinforce or resupply the previously hit frontline being wiped out by Turkish drones. “An entire 20-vehicle convoy was destroyed in #Hass tonight in a series of targeted strikes. Most significantly, #Syria's Air Force has been grounded almost all day,” Lister claimed.

Beginning on Sunday, regime forces began burning tires in strategic locations in the hope of limiting the abilities of Turkish drones to spot targets. Turkey was reported to have deployed an array of electronic jammers before it launched the drone strikes.

The director of the Extremism and Counterterrorism Program at the Middle East Institute said as with Turkey’s previous military operations, “The air campaign & MRL fire is ‘shaping’ conditions on the battlefield for an eventual pivot to ground maneuvers.”

Ankara on Sunday announced that the Turkish military launched Operation Spring Shield in Idlib in response to the brutal regime attack on Feb. 27.

The martyred Turkish soldiers were working to protect local civilians under a September 2018 deal with Russia, which prohibits acts of aggression in Idlib.

But more than 1,300 civilians have since been killed in attacks by the Assad regime, backed by heavy Russian airstrikes in the zone, as the cease-fire continues to be violated, sending about a million refugees toward Turkey's border with Syria.

Turkey on Oct. 9, 2019, launched Operation Peace Spring to eliminate YPG terrorists from the area east of the Euphrates river in northern Syria to secure Turkey's borders, aid in the safe return of Syrian refugees and ensure Syria's territorial integrity.

Besides the Operation Peace Spring, Turkey carried out two cross-border operations west of the Euphrates river, Operation Euphrates Shield in August 2016 and Operation Olive Branch in January 2018, to drive out terrorists, including the YPG and Daesh, from its borders. Turkish and Free Syrian Army (FSA) forces entered Afrin town center and liberated it from terrorists on March 18.

In all these operations, Turkey managed to deploy a variety of domestically manufactured air and defense platforms, all of which emerged as a result of successful and custom-made projects the country carried out over the last year to diminish the dependency on imported products and platforms. The country has come to a position where the national input ratio in the industry has reached 65%.

Particularly homegrown drones, Bayraktar TB2 and ANKA, have both played a significant role and demonstrated the progress Turkey has made in the nationalization process in the defense industries.

Performing active reconnaissance, surveillance and intelligence flights, the Bayraktar TB2 has the ability to transmit images to operation centers without delay and engage targets. It boasts a service ceiling of 8,239 meters (27,030 feet) and a flight endurance of 24 hours. It can carry 150 kilograms (330 pounds) of payload and can be operated day and night.

The Bayraktar TB2, capable of carrying four MAM-L and MAM-C missiles produced by ROKETSAN on its wings, can make precise targeting with its built-in laser target marker. This makes Turkey one of the six countries in the world producing its own armed drones and ammunition.

Another UAV deployed, the ANKA-S, which has also made its way to the country’s inventory, can be controlled via satellite and has a task range of thousands of kilometers. It can also collect intelligence and provide assistance for the operation center to precisely aim at targets and locate hostile elements.

Baykar Makina and TAI are in the process of developing new UAVs. Among these, Akıncı is the latest armed drone by the Baykar and is an upgraded version of the company's trademark platform Bayraktar TB2.

Operated with two turbine engines, the Akıncı is capable of carrying nearly 1.5 tons in useful load – 900 kilograms external and 450 kilograms internal – and can be controlled via domestically developed satellites. The platform is set to operate with various ammunition configurations.

TAI's Aksungur, a medium-altitude long-flight UAV capable of performing long-term operations at up to 40,000 feet, has recently made its first flight and is expected to be delivered to the Turkish military soon.

The video footage showing UAVs in Idlib has also displayed the pinpoint accuracy of precision-guided munitions, namely the Smart Micro Munitions MAM-L and MAM-C, both of which were developed and built domestically by Turkey.

The MAM-L, developed by leading defense contractor ROKETSAN, was first deployed in Operation Olive Branch. With warheads, varying from armor-piercing to those with thermobaric heads used according to the target type, many successful missions were carried out against possible targets such as light structures, armored land vehicles, radar antennas and weapon emplacement.

With a weight lower than 50 pounds and a height shorter than 1 meter, MAM-L was developed for UAVs in all sizes, as well as for the use in light offense aircraft and for air-to-ground tasks where weight is critical. The MAM-L has a high pulse sensitivity with a laser seeker head.