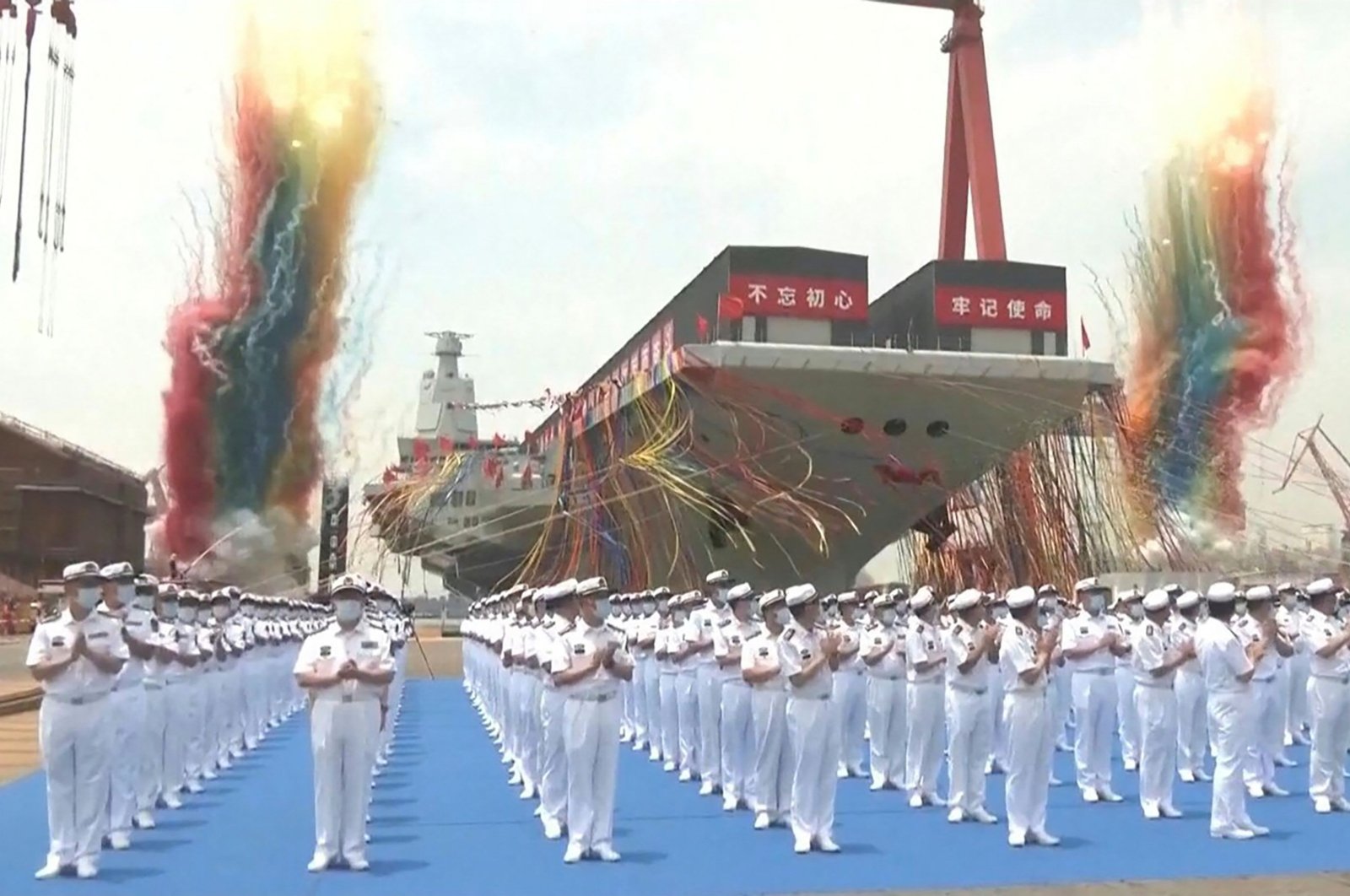 Beijing launched a new-generation aircraft carrier Friday, the first such ship to be both designed and built in China, in a milestone as it seeks to extend the range and power of its navy.

The Type 003 carrier christened Fujian left its drydock at a shipyard outside Shanghai in the morning and tied up at a nearby pier, state media reports said.

Equipped with the latest weaponry and aircraft-launch technology, the Type 003 ship’s capabilities are thought to rival those of Western carriers, as Beijing seeks to turn its navy, already the world’s largest, into a multicarrier force.

Satellite imagery captured by Planet Labs PBC on Thursday and analyzed by The Associated Press (AP) showed the carrier in what appeared to be a fully flooded drydock at the Jiangnan Shipyard, near Shanghai, ready for launch. It was draped with red bunting, presumably in preparation for the launch ceremony.

“This is an important milestone for China’s military-industrial complex,” said Ridzwan Rahmat, a Singapore-based analyst with the defense intelligence company Janes.

“This shows that Chinese engineers are now able to indigenously manufacture the full suite of surface combatants associated with modern naval warfare, including corvettes, frigates, destroyers, amphibious assault ships, and now an aircraft carrier,” he said. “This ability to construct a very complex warship from the ground up will inevitably result in various spin-offs and benefits for the Chinese shipbuilding industry,” he added.

China’s first carrier was a repurposed Soviet ship, and its second was built in China but based upon a Soviet design. Both were built to employ a so-called “ski-jump” launch method for aircraft, with a ramp at the end of the short runway to help planes take off.

The Type 003 employs a catapult launch, which experts had said appears to be an electromagnetic-type system like one originally developed by the U.S. Navy. China's official Xinhua News Agency confirmed the Fujian employed the electromagnetic system in a report on Friday's launch.

Such a system puts less stress on the aircraft than older steam-type catapult launch systems, and the use of a catapult means that the ship will be able to launch a broader variety of aircraft, which is necessary for China to be able to project naval power at a greater range, Rahmat said.

“Once it is fully operational, the PLAN’s third carrier would also be able to deploy a more complete suite of aircraft associated with carrier strike group operations including carrier onboard delivery transport and airborne early warning and control airframes, such as the KJ-600,” he explained.

China’s People's Liberation Army Navy, or PLAN, has been modernizing for more than a decade to become more of a “blue water” force – one capable of operating globally rather than being restricted to remaining closer to the Chinese mainland.

At the same time, the United States has been increasing its focus on the region, including the South China Sea. The vast maritime region has been tense because six governments claim all or part of the strategically vital waterway, through which an estimated $5 trillion in global trade travels each year and which holds rich but fast-declining fishing stocks and significant undersea oil and gas deposits.

China has been far and away the most aggressive in asserting its claim to virtually the entire waterway, its island features and resources.

The Fujian itself was named after the province opposite self-ruled Taiwan, sending a statement of intent to rivals.

The U.S. Navy has sailed warships past artificial islands China built in the sea that are equipped with airstrips and other military facilities. China insists its territory extends to those islands, while the U.S. Navy says it conducts the missions there to ensure the free flow of international trade.

In its report to the U.S. Congress last year on China’s military capabilities, the U.S. Department of Defense said the carrier development program was critical to the Chinese navy’s continued development into a global force, “gradually extending its operational reach beyond East Asia into a sustained ability to operate at increasingly longer ranges.”

China’s “aircraft carriers and planned follow-on carriers, once operational, will extend air defense coverage beyond the range of coastal and shipboard missile systems and will enable task group operations at increasingly longer ranges,” the department said.

In recent years, China has expanded its presence into the Indian Ocean, the Western Pacific and beyond, setting up its first overseas base over the last decade in the African Horn nation of Djibouti, where the U.S., Japan and others also maintain a military presence. It also recently signed a security agreement with the Solomon Islands that many fear could give it an outpost in the South Pacific, and is working with Cambodia on expanding a port facility there that could give it a presence in the Gulf of Thailand.

China's Xinhua News Agency reported the Fujian, which carries the hull number 18, had a fully loaded displacement of 80,000 tons. In a March report prepared by the U.S. Congressional Research Service, however, analysts said that satellite images suggest the Type 003′s displacement was about 100,000 tons, similar to those of U.S. Navy carriers.

The PLAN currently has some 355 ships, including submarines, and the U.S. estimates the force will grow to 420 ships by 2025 and 460 ships by 2030. Despite having the world’s largest navy numerically, however, the PLAN for now still has nowhere near the capabilities of the U.S. Navy and remains far behind in carriers.

The U.S. Navy is the world’s leader in aircraft carriers, with 11 nuclear-powered vessels. It also has nine amphibious assault ships that can carry helicopters and vertical-takeoff fighter jets.

American allies like Britain and France also have their own carriers, and Japan has four “helicopter destroyers,” which are technically not aircraft carriers, but carry aircraft. Two are being converted to support short takeoff and vertical landing fighters.

China's new carrier was named after the Fujian province on the country's southeastern coast, following a tradition after naming its first two carriers after the provinces of Liaoning and Shandong.

Its shipyard-launch ceremony was presided over by Xu Qiliang, a member of the ruling Communist Party’s Politburo and vice chairperson of the China's Central Military Commission led by president and party leader Xi Jinping.

After Xu cut the ribbon for the launch, a bottle of champagne was broken across the Fujian's bow, Xinhua reported. The doors of the drydock then opened and the ship moved out into the water and moored at its pier.

China’s development of the Type 003 carrier is part of a broader modernization of China’s military. As with its space program, China has proceeded extremely cautiously in the development of aircraft carriers, seeking to apply only technologies that have been tested and perfected.

At the moment, China is not believed to have the aircraft developed to fully realize the potential of the new carrier, Rahmat said.

It is not known how close China is in the development of its KJ-600 AWACS aircraft, which it began testing in 2020, to have it ready for carrier operations, and there is “little evidence” it has begun work on carrier onboard delivery transport aircraft, he said.

Now that it is launched, the carrier will have to be fitted out, which could take two to six months. Then there will be harbor acceptance trials and sea trials, which will likely take another six months before engineers begin launching test loads using the catapult system.

“The first aircraft will only be launched from this carrier perhaps in late-2023 to 2024, and full operational capability will likely be declared closer to 2025,” he said.

The coastal province of Fujian is just across the Taiwan Strait from Taiwan and home to the Eastern Theatre Command of the People's Liberation Army.

Taiwan is a thriving democracy but China considers the island its own territory and has never renounced the use of force to bring it under its control.

A senior Taiwanese official familiar with the island's security planning told Reuters that with the new carrier, China was flagging to the region its intentions about projecting power well into the Pacific.

"In the future, they want to directly penetrate to the east of the first island chain, which includes Japan's Ryukyu Islands and the Pacific waters off Taiwan's east," the official said, speaking on condition of anonymity.

"Any regional cooperation is seen by Beijing as an intervention in the Taiwan issue or a challenge to China. The launch of the new carrier is a defiant statement," the source added.

Taiwan has been modernizing its own armed forces, including putting into service a new class of highly agile stealth warships, which Taiwan refers to as an "aircraft carrier killer" due to its missile complement.

Taiwan's defense ministry said in a statement sent to Reuters about the new carrier that it "attaches great importance" to China's military developments and "incorporates this into enemy situation research in a forward-looking manner."