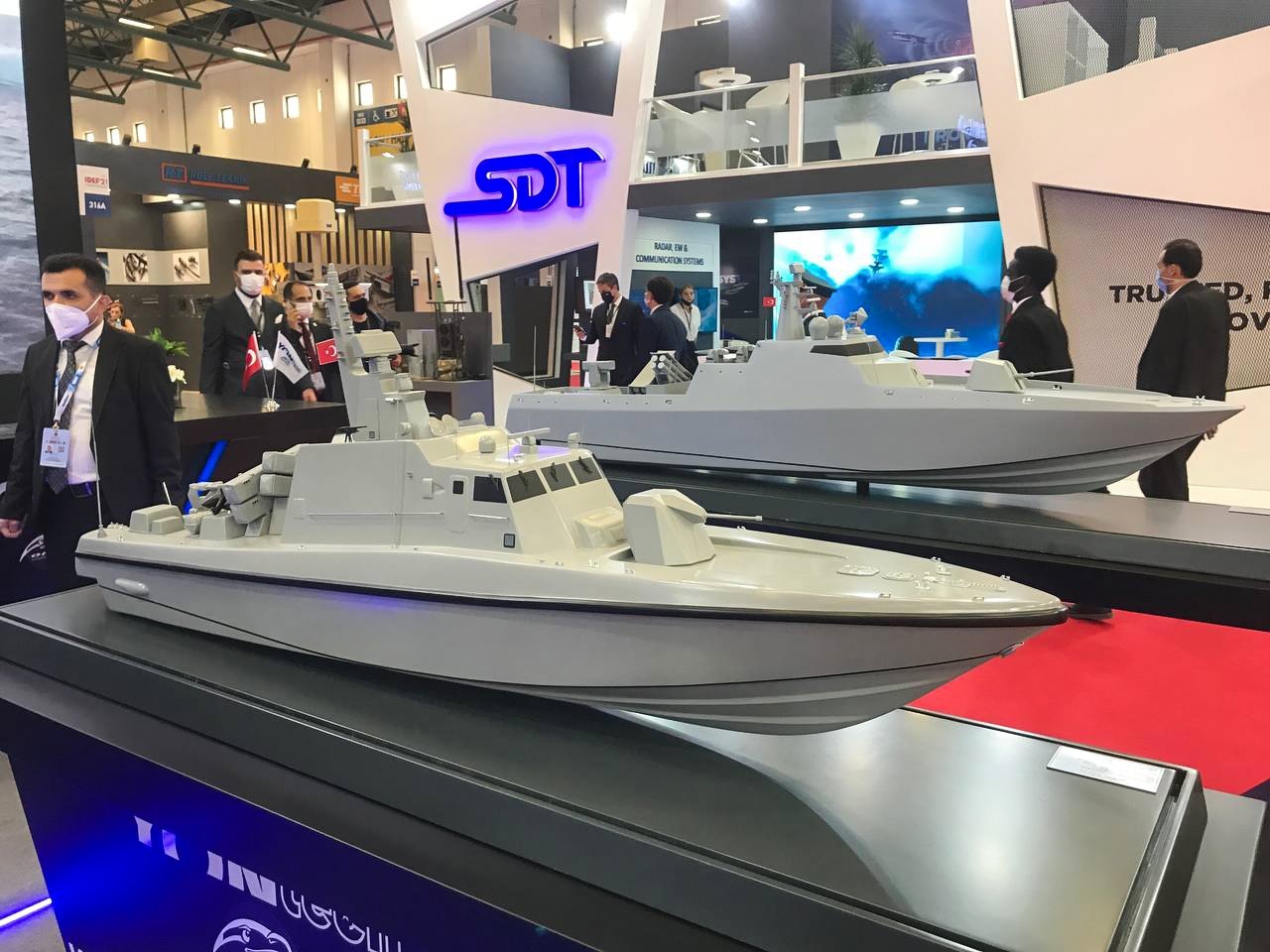 One of the largest global defense events kicked off Tuesday, and the spotlight was on the latest military and technology products produced by Turkish contractors, showcasing what President Recep Tayyip Erdoğan said was the ground the nation gained over the last two decades.

Held in the metropolitan city of Istanbul, the International Defense Industry Fair (IDEF 2021) is hosting around 1,200 firms from Turkey and foreign countries. The event will last through Friday.

The four-day event is being organized under the auspices of the Presidency of the Republic of Turkey in coordination with the Turkish National Defense Ministry, the Presidency of Defense Industries (SSB) and the Armed Forces Foundation (TSKGV).

The event will feature 536 domestic firms and 700 foreign companies. It is also expected to be attended by 89 top officials from all over the world – 31 government ministers, 33 army chiefs and 33 land forces generals.

Last year, the event was joined by over 1,000 participants and visited by some 76,000 professionals from 71 countries. The 2021 edition of the event was planned for this May but postponed due to the pandemic measures.

The fair will host panels on different topics such as space studies, future technologies and digital transformation. Several signing ceremonies are expected to be held during the event.

Addressing the event, Erdoğan said Turkey was not only self-sufficient in terms of its defense industry but that it was also pleased to share its know-how with its friends and allies.

“Turkey is a country that is happy to share with its friends all the opportunities and capabilities it has developed in the defense industry,” the president said.

“We have never and we do not see relations in the defense industry as an ordinary commercial relationship.”

Turkey has focused much on its defense industry to overcome challenges posed by global suppliers and embargoes, Erdoğan said.

The country is now among the top producers of various defense products, particularly unmanned aerial vehicles, he noted.

“We are now among the top three-four countries in the world in design, production and sale of armed unmanned aerial vehicles, which have proven their success in the field.”

“We have managed to reduce our external dependency in the defense industry to 20% from 80%,” Erdoğan said. The number of projects in the industry has exceeded 750, compared to just 62 in 2002, lifting the budget of the projects up to $75 billion from $5.5 billion, he added.

Annual turnovers of the firms, whose number has reached 1,500 from just 56, have reached $11 billion, the president said.

Below are firms and some of their products that are being showcased at this year's IDEF.

Turkish defense pioneer Aselsan is exhibiting more than 250 products at the event.

Several products of the state-run firm, including those relating to naval, aerial and air defense systems, border security, communication, electronic warfare, electro-optical systems and weapon systems, will be showcased.

Some of its products, such as the laser target device ENGEREK-2 and the ASELFLIR-500 electro-optical system, are being exhibited for the first time.

Turkish Aerospace Industries (TAI) is putting its aerial vehicle projects on display, including the training aircraft Hürjet, the UAV Anka, the T129 Tactical Reconnaissance and Attack Helicopter (ATAK) and the National Combat Aircraft (MMU), a fifth-generation indigenous stealth fighter jet and one of the country’s long-awaited technology projects. The firm will be a significant part of the event.

The firm will also showcase its new generation satellite project.

Another prominent contractor, Havelsan is showcasing its newly developed “Digital Troop” for the first time.

The system enables UAVs and unmanned land vehicles to work together.

The company will also host a session with the title “Future’s Armies: Digital Troops” during the event.

As the main contractor of Turkey’s first domestic frigate ship TCG Istanbul, STM is also displaying its indigenous engineering capabilities in the event through its projects for naval platforms, such as the I Class Frigate, Logistics Support Ship, TS1700 Submarine and Offshore Patrol Vessel.

The firm’s UAV systems, such as KARGU, ALPAGU and TOGAN, are also being showcased.

Another defense firm, FNSS will be showcasing a land vehicle, developed for the Turkish Armed Forces (TSK), named Pars IV 6x6, for the first time.

The vehicle has resistance against improvised explosive devices and mines, and the shooting capability for special operations and modular shield structure.

The firm will also showcase Kaplan MT – Turkey’s first exported defense product in tank class. The tank launched in 2017 and the firm signed its first export agreement in 2019.

At the mass production phase, the firm made some changes to the body and cabin of the tank.

The firm’s other vehicle is an updated version of the Hızır 4x4 tactical armored vehicle, Hızır II.

Kalekalıp, a producer of weapon and missile molds, is exhibiting 13 rifles, of which three weapons are newly produced.

The company manufactures NATO-class rifles for domestic and foreign customers.

It is also displaying its existing products, including an armored warfare Ejder Yalçın.

The firm and the SSB signed an agreement in 2019 for ATOK, which aims to generate the “future’s soldier.”

ATOK provides wearable and movable products for digitalizing soldiers for use in the field.

Civil and military vehicle producer Otokar is participating in the IDEF for the first time.

The firm will exhibit 11 military vehicles and tower systems at the event.

Among the vehicles will be the electrical armored vehicle Akrep II and its diesel-engine version Akrep IId.

Otokar’s mine-resistance armored vehicle Cobra II MRAP is being exhibited at the fair for the first time.

The Turkish Naval Forces use Phalanx and Sea Zenith systems in ships currently, but these systems cannot be upgraded.

The firm produced a prototype of its new defense system and the project is expected to be completed in the second half of 2022.

The system aims to increase the efficiency of UAVs by increasing their observation capacity in every weather condition.

Songar has the capability to be equipped with different types of weapons.

The firm’s other drone, Togan, is able to carry and use a grenade launcher.

The firm’s drone named ZCQM can fly for over 70 minutes with a 500-gram useful load.

Another of its drones, ZCOM, can carry a 25-kilogram (55-pound) useful load for 30 minutes and 1.5 kilograms for more than two hours.