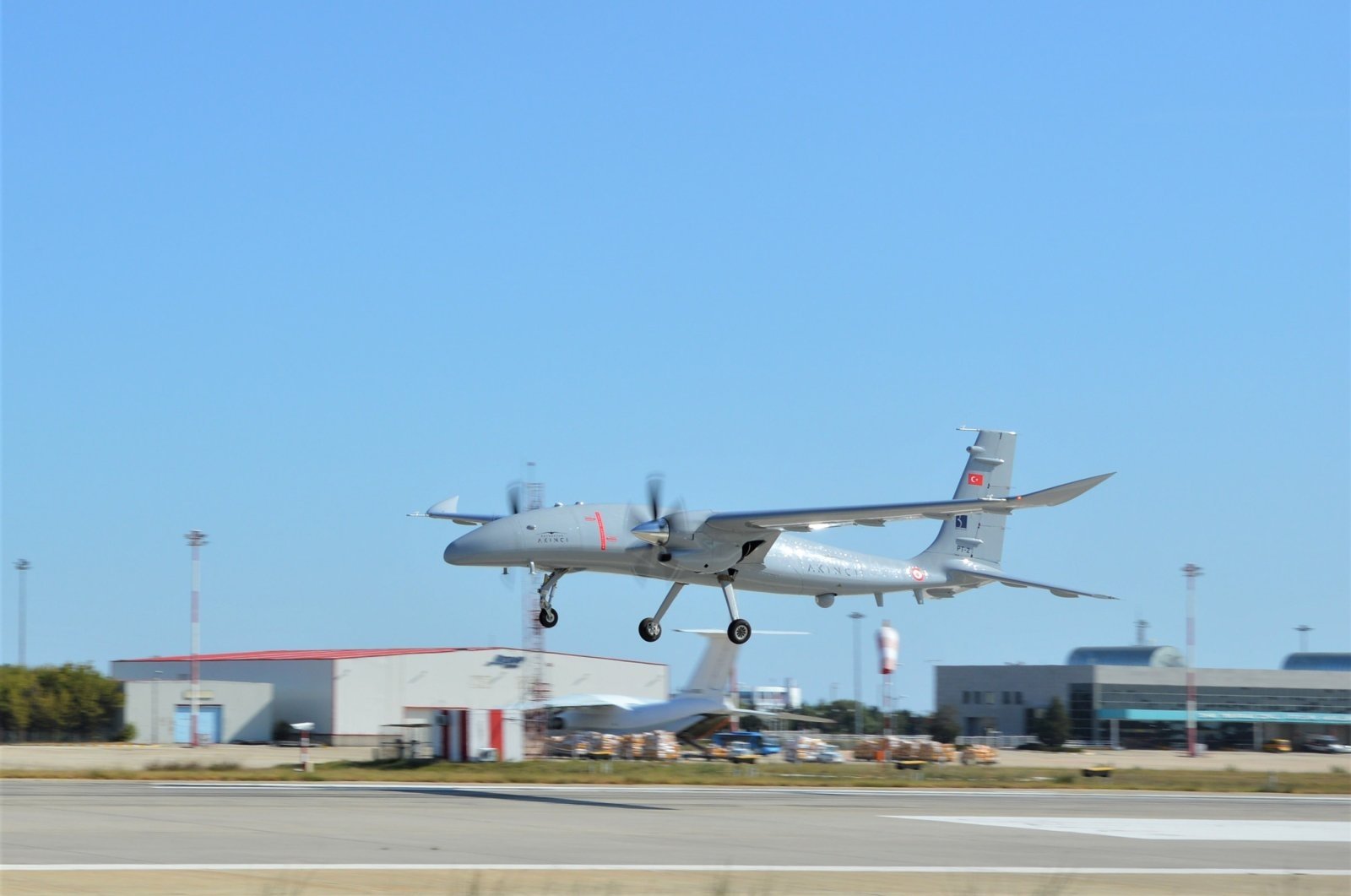 The unmanned combat aerial vehicle Akıncı is seen in the air during its second test flight, Tekirdağ province, northwestern Turkey, Aug. 19, 2020. (Photo by Baykar via DHA)
by DAILY SABAH WITH AA Oct 30, 2020 10:52 am
Edited By Ayşe Betül Bal
RECOMMENDED

Baykar's Chief Technology Officer (CTO) Selçuk Bayraktar shared the information on his Twitter account. He said the domestic engines will be produced by the TAI subsidiary, TUSAŞ Engine Industries (TEI). He also shared a video showing the TEI engines in the company facility.

The new engine, produced by TEI, has the highest performance figures in its class globally, Bayraktar said.

The Baykar CTO added that the engine undergoing tests in his video is not a prototype, rather a mass-production unit.

Canada announced earlier this month that it has suspended arms export permits to Turkey over allegations that it was using Canadian technology in the military conflict between Yerevan and Baku in Armenian-occupied Nagorno-Karabakh.

Following Canada's move, Turkey's Presidency of Defense Industries announced that the local defense industry is going ahead with its plans, regardless of embargo decisions.

"Our Common Aperture Targeting System cameras, which will be equipped on our armed UAVs, are going into mass production thanks to those who contributed," it said in a statement.

A Canadian engine producer has also said this week it was suspending the sale of aircraft engines to Turkey.

Currently, there is no official information on the design or the abilities of the Bayraktar TB3, while open sources suggest that it might be a medium-altitude long-endurance UAV (MALE UAV), ranking between Bayraktar TB2 and Akıncı.

Akıncı, equipped with locally made active electronically scanned array (AESA) radar and air-to-air missiles Gökdoğan and Bozdoğan, can launch several types of locally made ammunition, such as standoff missiles (SOM).

The drone can collect and save data from its sensors and cameras thanks to its six artificial intelligence (AI) computers. With its AI systems, it can detect land targets invisible to the human eye and fly without GPS.

Several Turkish firms are active in the defense field through their cutting-edge military products such as armed UAVs, remote control guns, missiles and air defense systems.

Turkey has successfully used its unmanned military vehicles on the field during its cross-border operations in Syria which targeted terrorist elements. The UAVs, which were included in the inventories of some of Turkey's friends and allies, also proved their success.