Putin risked reputation with cruiser in Black Sea, he lost both 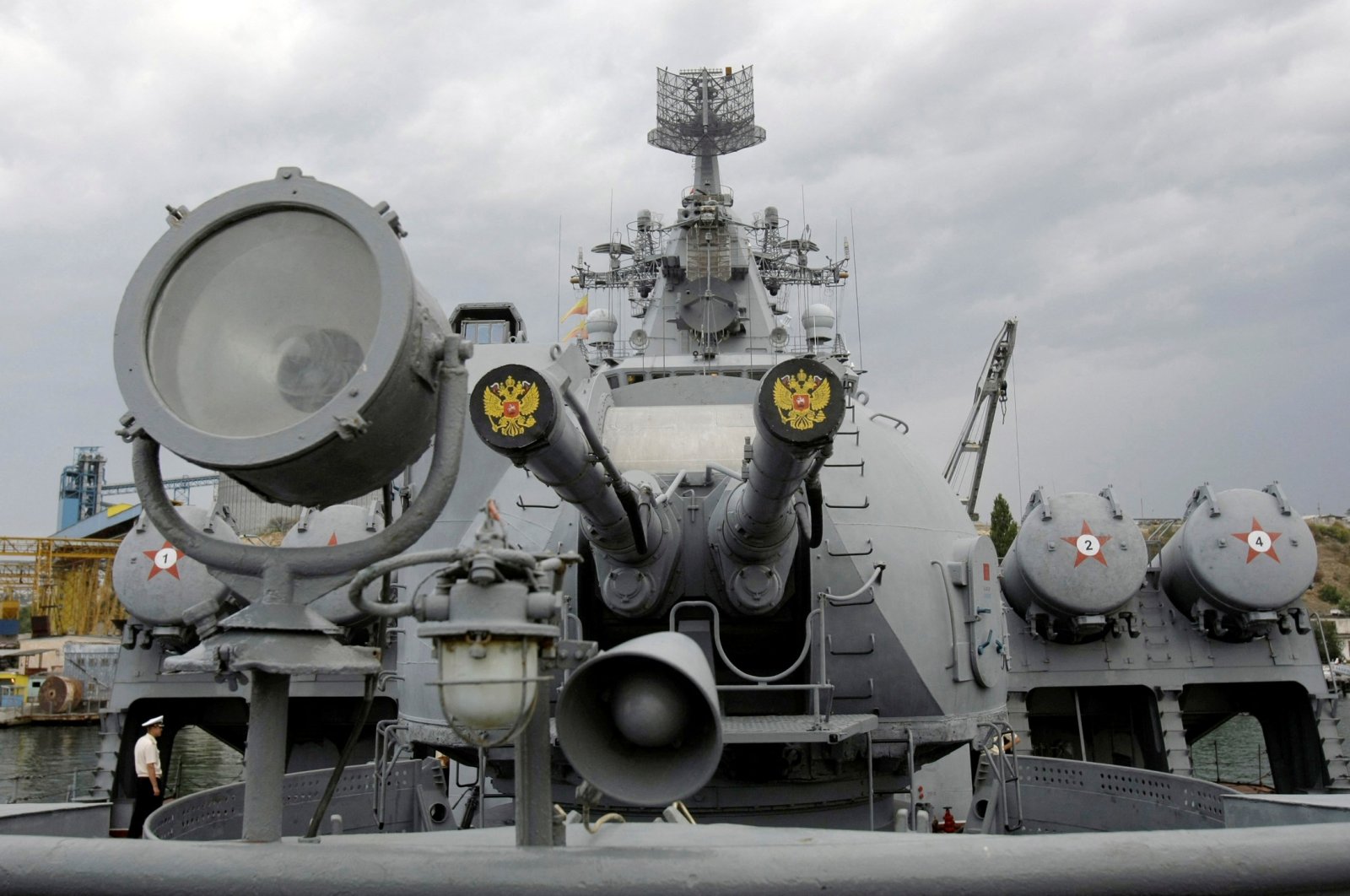 Dubbed one of the most powerful on the globe, the Russian Navy has already seen major setbacks from Ukraine – its Black Sea neighbor that barely has a navy

The postage stamp depicting a Ukrainian soldier making a crude gesture to a Russian warship sold out quickly following an incident that was acknowledged by Russia in mid-April – more than a month after Vladimir Putin ordered his troops into the neighboring territory.

That warship on the stamp was the Moskva and Russia admitted it had sunk deep in the Black Sea.

On April 15, Moscow officially confirmed that its Black Sea flagship had sunk while being towed back to port due to a fire caused by an explosion of ammunition.

Ukraine claimed that it hit the ship with two Neptune anti-ship cruise missiles. Russia denied this version of events, however, the Pentagon backed the Ukrainian claim, as did several defense and open-source security intelligence (OSINT) experts.

So, it was this development that prompted Kyiv residents to wait in long queues in front of the Ukrainian postal service Ukrposhta to buy the stamp – a souvenir for future generations.

The Ukrposhta was later targeted by a cyberattack, which was said to be the Russian response to the immense popularity of the stamp.

The reason Russia felt the need to target the postal service with a cyberattack and strike a factory in Kyiv that it said made and repaired anti-ship missiles, in apparent retaliation, is that the sinking of the Moskva was more than just a military or commercial loss.

It was among the latest in a series of strategic setbacks, and a symbolic one.

The loss of the Moskva “is definitely a huge blow to the prestige and morale of the Black Sea Fleet and the Russian Navy,” said Arda Mevlütoğlu, a specialist in aviation, space, defense policies and technologies, explaining that the 13,000-ton displacement flagship cruiser was one of three ships in its class and among the largest in Russia's inventory.

Mevlütoğlu told Daily Sabah that one of the explanations for Moskva being in such close proximity to the Ukrainian shore was that “the ship was providing offensive anti-air operations with its air defense system, i.e., trying to engage Ukrainian aircraft, helicopters or drones flying in the region.”

While, to some, there was no need for a cruiser in the first place.

Jerry Hendrix, a senior fellow at the Sagamore Institute and a retired navy captain, who was cited in a report by Sandboxx, said that this was indeed a frigate mission.

“The Black Sea is a constrained water space. And really, there’s not an anti-ship cruise missile mission here,” he said.

The Moskva was a Project 1164 Slava class cruiser and was equipped with an S-300F Fort air defense system, “the naval version of the S-300,” Mevlütoğlu explained.

“The S-300F provides air defense against low to high altitude targets in ranges up to 100 kilometers (62.14 miles),” he said, adding that the ship had a three-layered air defense comprised of the S-300F, Osa-M and AK-630 close-in weapon systems (CIWS).

“Theoretically,” Mevlütoğlu said, “these weapon systems, directed by several radars and electronic intelligence systems should be able to detect the incoming Neptune missile, which flies at subsonic speeds.”

Frederik Van Lokeren, a naval analyst and former officer of the Belgian Navy, in an early report he shared through OSINT analysis, wrote that the Moskva operated two radar systems, one being the dome-shaped 3R41 Volna fire control system that provides accurate target data available for S300 missiles. However, its weakness is that the radar is said to only have a field view of 180 degrees.

Van Lokeren said if it was distracted, for example, by a combat drone as suggested by some, this would possibly point the radar away from the incoming Neptune missiles.

He added that the second radar of the ship, a 360-degree MR-800 Voskhod, meanwhile, is “less suited for cruise missiles that fly at low altitudes such as the Neptune,” as it was designed to detect aircraft.

Once the Ukrainian missiles sneak under the Moskva’s radars and hit the target, there comes the real headache for the ship.

According to Hendrix, the cruiser’s design is self-destructive since it has above-deck launch tubes that “makes them extremely vulnerable to damage and fragmentation, and then causing damage to its own ship if the ship is hit first.”

“If the ship does not fire off all of its missiles before it is hit ... that missile then has congruences where it cooks off other missiles around it, and the ship virtually self-destructs because of the way it was designed,” he told Sandboxx.

The Neptune missile was developed by Ukraine based on an earlier Soviet design.

The missile’s launchers are mounted on trucks stationed near the coast and can hit targets up to 280 kilometers away, according to the Washington-based Center for Strategic and International Studies, possibly putting the Moskva within range.

According to Mevlütoğlu, regardless of the cause of the incident, whether being hit by a missile or suffering an explosion in its ammunition storage, “the resultant loss is a big surprise.”

“Such a large ship, which was designed to withstand direct confrontation with NATO navies is expected to survive even with the most severe damage. Additionally, her crew is expected to be well trained and experienced in fire and damage control, preventing the loss of the ship,” he said.

The sinking of the Moskva, meanwhile, has further implications for global naval warfare.

Mevlütoğlu said, if the Neptune-missile scenario is correct as conveyed by many independent sources, “this is a strong reminder of the anti-ship guided missile threat against naval ships in modern warfare.”

The anti-ship missiles "create an asymmetry” since they are very cheap compared to the targets they are fired upon, Mevlütoğlu said, adding that they are usually fired in large numbers, saturating the defenses of the ship.

Furthermore, several open-source analysts have already suggested that Ukraine has strongly benefited from its Bayraktar TB2 unmanned combat aerial vehicles (UCAVs) – which are developed by Turkish drone magnate Baykar and have already gained worldwide fame – while targeting the Russian cruiser.

When asked about the possibility of the combat drone being used in the operation, Mevlütoğu explained that the Neptune battery requires the location of the ship to fire and Ukraine has several assets that can do this, including the Bayraktar TB2.

Ukraine Navy Commander Oleksiy Neizhpapa has previously stated that they were planning to use the TB2s for target acquisition missions for the Neptune batteries, therefore, Mevlütoğlu said that it is highly probable that the Bayraktar TB2 drone played a role.

“Another candidate is the Mineral U target location radar, which was developed for the Neptune battery by the Ukraine defense industry,” Mevlütoğlu added.

It is now well-shared information that Kyiv has been benefiting from its Turkey-made drones not only to hunt down land targets but to destroy naval enemy assets as well.

Most recently on May 2, two Raptor assault boats were engaged by a Ukrainian Navy-owned Bayraktar TB2 drone near Snake Island, resulting in hits on both targets. The incident was shown in video footage shared by the Ukrainian Defense Ministry and commonly circulated on social media.

None of the Russian losses at sea makes the country less superior in the waters since the two parties do not have comparable navy powers.

Ukraine cannot possibly lose what it already did not have, but the country showed that it is capable of using an effective combination of tactics and strategy to exploit its enemy's weaknesses.

On the other hand, by deploying the Moskva cruiser in the Black Sea in such close proximity to Ukraine’s shore, despite the many arguments that a frigate mission would have more success, Russia has risked its reputation and lost it.