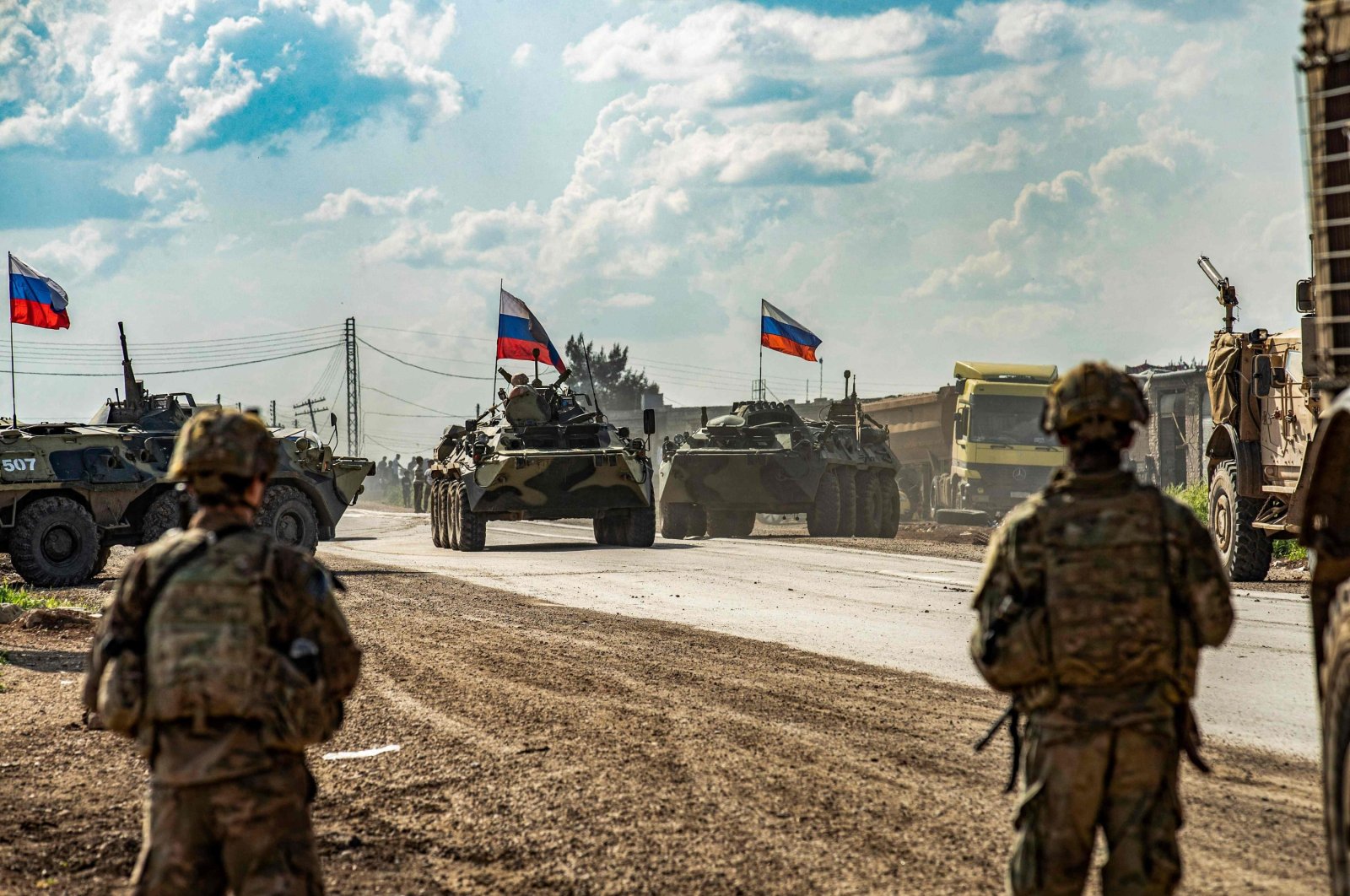 U.S. soldiers stand along a road across from Russian military armored personnel carriers (APCs), near the village of Tannuriyah in the countryside east of Qamishli, northeastern Hasakah province, Syria, on May 2, 2020. (AFP Photo)
by DAILY SABAH Jul 24, 2021 2:32 pm
Edited By Ayşe Betül Bal
RECOMMENDED

The report by the Asharq Al-Awsat cited a “well-informed” Russian source whose name was withheld, claiming that Russia has “run out of patience” with Israel in Syria.

It said that the move by Moscow was the result of talks between Russia and the United States, which, according to the source, gave the impression that “Washington does not welcome the continuous Israeli raids.”

The report, also cited by Israeli papers, said this impression left space for Russia to act more freely in supporting Assad forces in Syria with more advanced anti-missile systems and know-how to make them more capable of shooting down Israeli armaments.

These claims of curtailing Israeli raids were deemed effective by the Arabic paper, which was not confirmed by an outside or independent source.

Israel has been targeting Iran-linked military targets in the war-torn country’s regime-held areas with airstrikes without entirely acknowledging to do so. The Israeli strikes have also been repeatedly criticized by the Syrian regime ally Russia.

This week alone, Syrian media reported two Israeli attacks which they claimed to be thwarted. The Syrian media made these such claims several times without outside confirmation.

In January, Russian Foreign Minister Sergey Lavrov said Israel should provide his country with intelligence about such threats of “Iranian militia” so that it can “neutralize” them, criticizing Israeli airstrikes.

“If Israel is really forced to respond to threats to the Israeli security coming from the Syrian territory, we have told our Israeli colleagues many times: if you see such threats, please give us the information,” he was cited as saying at the time by Sputnik.

Lavrov’s remarks came after a heavy Israeli strike in eastern Syria, targeting positions and arms depots of Iran-backed forces and left at least 57 fighters killed and dozens wounded, according to a Syrian opposition war monitoring group.

Those airstrikes were carried out with intelligence provided by the U.S., a senior American intelligence official told The Associated Press (AP).

Since the start of the civil war in Syria, Russia has been supporting the Assad regime and continues to build a military presence in the country. There are currently 18 Russian military bases and posts in the areas under PKK/YPG terrorist group control east of the Euphrates, namely in Hassakeh, Raqqa, Manbij and Ain al-Arab (Kobani) in Aleppo.

Most recently, in mid-July, Russian Defense Minister Sergei Shoigu said during his visit to the Rostvertol helicopter manufacturing factory in Rostov-on-Don, Russia, that his country tested over 320 types of weapons in its operations in Syria. The helicopters manufactured at that very factory were also part of their operations in Syria.