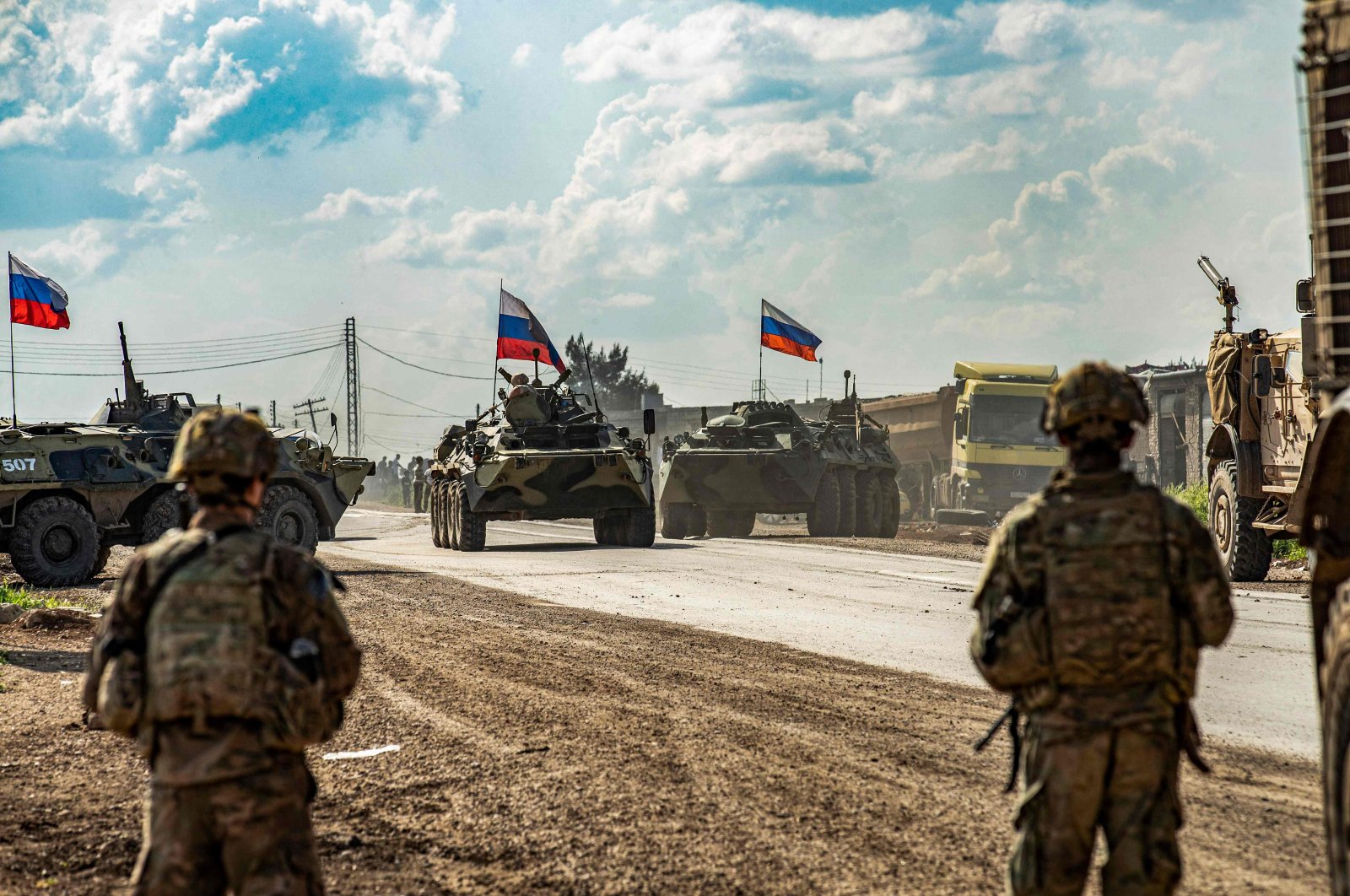 U.S. soldiers stand along a road across from Russian military armored personnel carriers (APCs), near the village of Tannuriyah in the countryside east of Qamishli in Syria's northeastern Hasakah province, May 2, 2020. (AFP Photo)
by Nur Özkan Erbay Mar 25, 2021 12:44 pm
RECOMMENDED

During this week, four people, including two children, were killed and nine were injured in bomb attacks on the Turkish-controlled Syrian city of Ras al-Ain by the YPG, the Syrian offshoot of the PKK. The region was cleared of terrorist activity by Turkey in October 2019 with Operation Peace Spring, thus ensuring the safe return of Syrian asylum-seekers to the region.

Despite the 13-article agreement reached with the United States in October 2018, the fact that YPG elements can still carry out bomb attacks across Turkey's Şanlıurfa province’s Ceylanpınar border is also one of the biggest questions and problems. So, time will tell whether the Joe Biden administration in U.S. will abide by the decisions made and signed by the previous administration. According to the Terrorism Analysis Platform (TAP) database, the YPG carried out a total of 224 attacks on safe zones after the 2018 agreement with the U.S. Among these, 64 were car bomb attacks, 64 were IED attacks, 51 were gun attacks, 19 were mortar attacks and nine were rocket attacks.

On the other hand, attacks have not stopped in Idlib, which is under the opposition, Turkish and Russian control and where a cease-fire was reached under the Sochi agreement with Russia in March last year. During the weekend, seven civilians, including children, were killed and dozens injured in separate ballistic missile attacks by the Assad regime, Iranian-backed groups and Russian jets in Bab al-Hawa, Atareb, Qah and Sarmada in the areas of Idlib near the Turkish border with Hatay and the Reyhanlı area. Even the hospital in Atareb, Idlib, was the target of these attacks. After the attacks, a Turkish Defense Ministry statement said: “The Assad regime has again carried out a brutal attack on innocent Syrian civilians. Five innocent civilians, one of whom was a child, were killed, and 10 wounded by the regime at a hospital in Idlib's Atareb. The regime committed crimes against humanity.”

The ministry also stated that a message was forwarded to Russian counterparts to stop the attacks immediately. On Tuesday, Russia's Ambassador to Ankara Aleksei Erkhov was summoned to the Foreign Ministry.

The Syrian Network for Human Rights (SNHR) told Dilara Aslan of Daily Sabah this week that despite a year since the cease-fire, dozens of civilians have still been killed in 75 regime attacks targeting opposition groups in Idlib.

Now, these examples show that the promises, both maintaining the cease-fire in Idlib and committing to clear the YPG from the safe zone along the Turkish-Syrian border, have not been fulfilled by Washington and Moscow.

In the meantime, the details of an interesting meeting that took place in August 2013 may shed light on the situation today in the field. Then-U.S. Secretary of State John Kerry worked very closely with his Russian counterpart Sergey Lavrov at that time, and the uncertainties in both countries' Syria policy became clear the same year. The Obama administration, which considered the use of chemical weapons a red line, suddenly decided that the U.S. would not engage in military intervention in the country that year, and intense negotiations continued behind closed doors with Russia. Washington has chosen to be content with Moscow's pledge to collect those weapons when the Assad regime uses chemical weapons. Since then, Russia's military presence in Syria has become stronger, while Washington has continued to maintain its presence through proxies in the country, such as the YPG, rather than the American military.

Since then, Syria has continued to pay the human cost, which intensifies daily. Children and civilians continue to lose their lives through the inhumane treatment of the Greek coast guard, either in attacks by the regime and terrorist organizations in the country, or in the struggle to escape to Europe.

It is a clear fact that Syria is in the state that it is in today, now in the 10th year of civil war, due to the U.S. and Russia having failed to fulfill their promises to Turkey and the international public. Russia continues to maintain relations with Assad, with who the country shares historically deep-rooted ties, at all costs, even if that cost is innocent human life. The U.S. and Russia have prioritized their own strategic interests, which as a result threatens Turkey and Syria's national security given that the two nations share 909 kilometers (565 miles) of border and have borne the brunt of the war. Turkey and Syria are seen as insignificant and are ignored by Moscow and Washington.

On the other hand, the failure of the U.S.' Syria policies over the past 10 years is recognized by the whole world. During Obama's eight-year presidency, his most criticized policies were in the field of foreign policy, and the weight of this is the policy, or lack of policy, that he followed in the Middle East. Criticism of him in this area reached its peak in the Syrian war, both within the U.S. and internationally. The fact that the Assad regime is still standing today is due to the fact that Washington, just like Moscow, still sees itself as a useful actor.

Now, as at that time, it seems useless to expect the Biden administration, which claims that it will prioritize multilateral, international intervention and agreements to squeeze Russia and China, to end the war in Syria. Because there are indications that the U.S. administration, which will not enter unilateral military interventions as it did under Obama, will continue to work with proxies, that is, the YPG terrorist group, without paying the cost in Syria.

But how much longer can Washington maintain the image of this "tactical partnership" in the name of fighting Daesh when the YPG has killed Syrian civilians in dozens of bomb attacks in Ras al-Ain and other regions of northern Syria?

On the other hand, Turkey's determination in Syria is clear. President Recep Tayyip Erdoğan wrote an article for Bloomberg this week where he called on all Western countries to join Turkey's efforts to mobilize all resources for Syria.

"If you are not mobilizing for a solution, at least don't stand by and share Turkey's burden," Erdogan warned, recalling that Turkey is hosting millions of refugees, that it was the first country to use its combat forces against terrorist groups, especially Daesh, and that it established safe zones with local elements in places cleared of terrorism.

In fact, Erdoğan's words were actually like a message to the West about how it failed the test in Syria, not only in the field but also in the moral sense. By going back and forth of the issue, the U.S., EU and Russia's actions led to the humanitarian crisis in Syria in the first place. Now, Washington, Moscow and Brussels are undergoing a new test for Syria. Will they abide by their cease-fire, safe zone and migration agreements with Turkey here and fulfill their promises? Will they cut their ties with the regime and the YPG terrorist organization? Will they recognize that by taking all of these steps that they are in fact respecting the rights of the Syrian people who are the true owners of the lands?