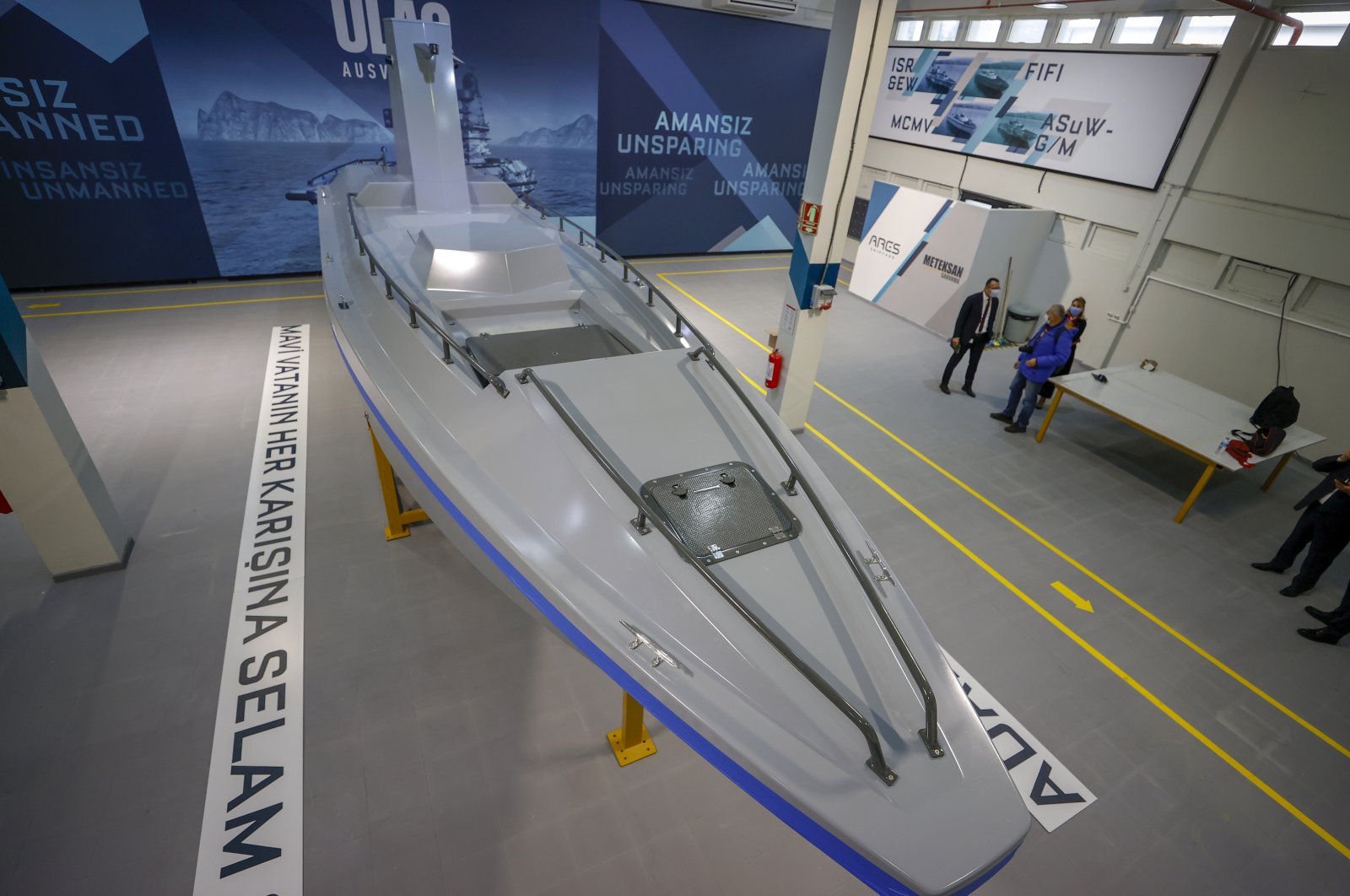 The remote-controlled, autonomous unmanned marine product was designed as a state-of-the-art machine with artificial intelligence (AI). It is set to be launched into the sea at the end of this month. Meanwhile, test firing of the vehicle's weapons systems will be conducted with guided missiles that were also developed domestically by local defense firm Roketsan.

The AUSV, the first product from the ULAQ series, was unveiled in October at a press conference in the capital Ankara, and the prototype was at the time scheduled to be completed in December.

The product came as a result of three years of research and development (R&D) activities by both companies. The AUSV will have a cruising range of 400 kilometers (249 miles), a speed of 65 kilometers per hour (40.3 miles per hour), day and night vision capabilities and national encrypted communication infrastructure.

The AUSV is expected to provide strategic superiority for tasks at sea in the maritime area surrounding Turkey, locally dubbed the "Blue Homeland," including the Aegean and the Eastern Mediterranean. It can be commanded from mobile vehicles and floating platforms such as aircraft carriers and frigates in addition to the land-based headquarters command center.

Ares Shipyard General Manager Utku Alanç told AA Tuesday that they aim to operate the vehicle in the Aegean and the Mediterranean seas. He said the boat can easily assist territorial waters problems in the Aegean or similar crises that are frequently experienced because it is very unlikely to be seen by enemy forces due to its radar signature.

The vehicle can be equipped with different types of payloads to meet the various operational needs of Turkey's security forces, such as electronic warfare, jamming technology and different communication and intelligence systems, as well as missile systems. They are expected to be part of reconnaissance missions, asymmetrical warfare, armed escorts, force protections, strategic facility protections, surveillance and intelligence gathering.

Besides its ability to operate alongside other AUSVs with identical or different designs, the marine vehicle was designed to perform joint operations with other unmanned and manned aircraft.

Alanç added that the first two years of R&D work consisted of researching existing developments around the world, thus providing a base of knowledge upon which they could develop their own.

He said producing such vehicles domestically is significant as it is more of a weapon than a marine craft.

Meteksan was also involved in the project. It “has had a large role in the command control systems, autonomous systems, development of domestic software and provision of national encrypted communication infrastructure,” Alanç noted.

“We came out with this product to represent our country better in the world defense arena,” he said, adding that from now on, they will work on further diversifying their products.

Meteksan Defense General Manager Selçuk Alparslan, also speaking to AA, said that many infrastructure systems used in UAVs and missile systems have been produced within the company.

"In today's asymmetric warfare, it is essential to see without being seen and hit without being hit,” Alparslan said, which is among the general features of self-functioning vehicles.

“Autonomous systems are not only remotely controlled systems. These are systems that will automatically direct and manage themselves in the battlefield, and it has been crowned with completely artificial intelligence for the war environment,” he stressed.

Referring to the command system that can remotely control and manage all the movements of the sea vehicle, Meteksan's top official said, "To use these systems autonomously, they need to have the software and the hardware and be built per the users’ demands and one of the main elements of national production is that you have systems resistant to being jammed by the enemy.”

“The AUSV was built to be resistant to electronic warfare,” he added.