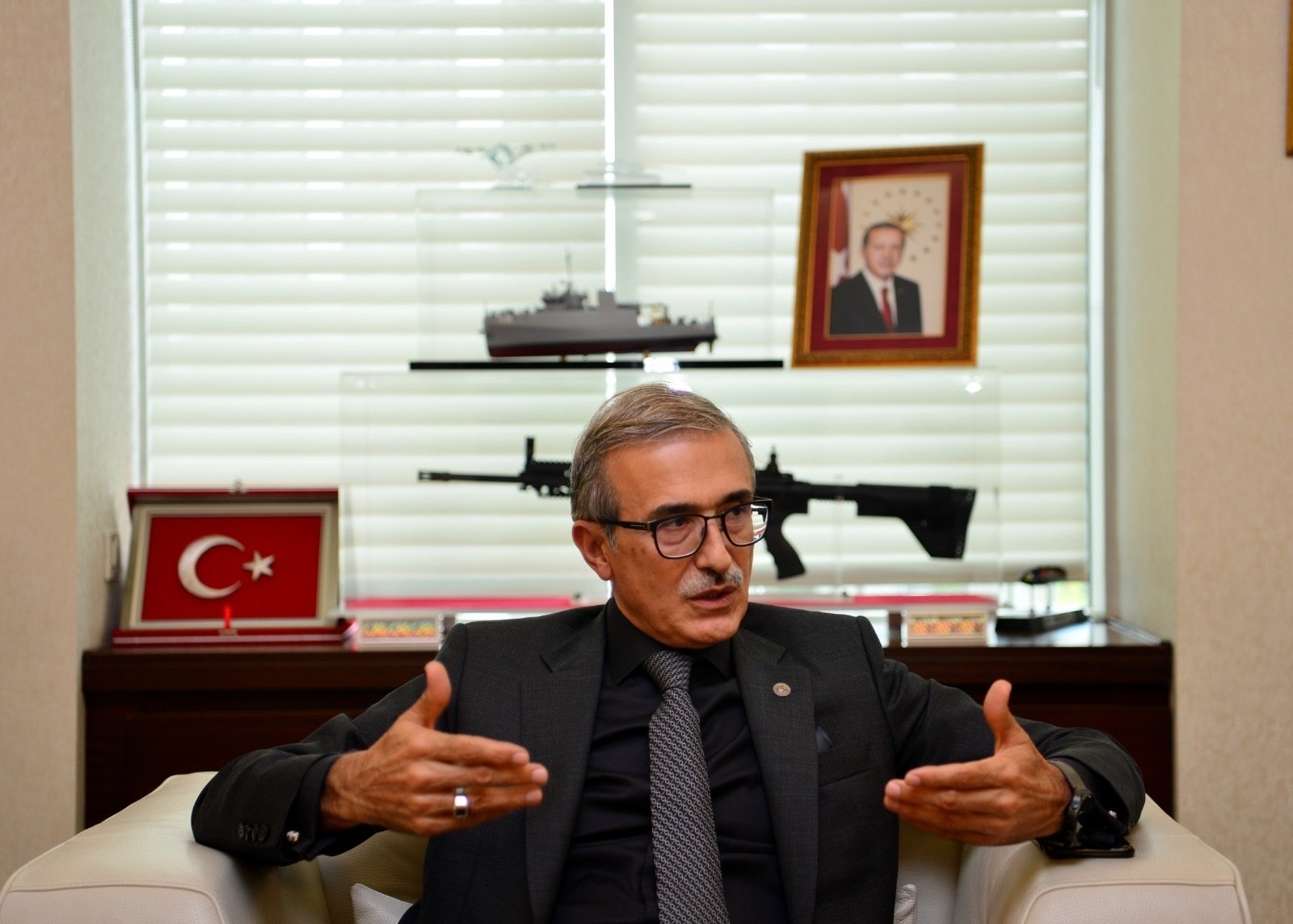 There is vivid interest in Turkey’s defense industry products from countries all around the world, Defense Industries Presidency Chairperson Ismail Demir states, indicating that Ankara is open to cooperation with friendly and allied countries

Turkey is in the process of rolling out new defense industry products and developing already existing ones with new sophisticated systems with the number of countries interested gaining pace, Presidency of Defense Industries (SSB) Chairperson Ismail Demir stated.

Speaking to Daily Sabah in an exclusive interview, Demir said: “There is special interest toward our unmanned aerial vehicles (UAVs) and armed UAVs from countries of various geographies. There is a big potential market.”

Asked about new potential buyers of Turkey’s drones, Demir preferred not to state country names as “the process can sometimes be hindered by some actors.”

He added that cooperation with Ukraine on UAVs is also continuing with concrete steps and training in this regard.

“But from the other side, we will also continue to renew ourselves while our products have much evolved since their first versions and prototypes came out,” Demir said, indicating that this is a long-running process.

Touching on the significance of following technological developments, Demir said, "If you stop you will fall.”

Demir underlined that Turkey is open to cooperation with friendly and allied countries, though sometimes countries have restrictions on this kind of cooperation.

Demir gave the example of the EU, saying that when member countries are interested in working together with Turkey or buying defense products, they are restricted by the bloc’s policies and cannot act independently.

“We believe that being in cooperation with friendly and allied countries will contribute to global peace and stability.”

On the S-400s issue, Demir said: “Turkey still has not seen any concrete steps from the U.S. We are hearing goodwill statements.”

The purchase of the Russian-made systems in 2019 prompted the Donald Trump administration to remove Turkey from a consortium producing F-35 fighter jets. The U.S. argued that the system was incompatible with NATO systems and could potentially be used by Russia to covertly obtain classified information on the F-35 jets. Turkey, however, insists that the S-400s would not be integrated into NATO systems and would not pose a threat to the alliance.

The U.S. did not even request to discuss the issue, Demir elaborated, “We are ready to remove their concerns."

Demir also reiterated that the U.S. did not give the Patriots to Turkey in the conditions Ankara wanted, “which were not that difficult conditions.”

He called again for dialogue and stated that the U.S.’ arguments “are not sensible nor acceptable – we expect an explanation,” he said, referring to the U.S.’ claims that the S-400s do not match NATO systems.

On the sale of Turkey’s homegrown T129 Tactical Reconnaissance and Attack Helicopter (ATAK), powered by an American engine, to Pakistan that is currently awaiting U.S. permission to export, Demir said that that there is no new development on the issue while the process continues.

The long-range anti-ship missile Atmaca, on the other side, has entered mass production, Demir said.

One of the most important weapons in surface warfare, the missile was produced to decrease Turkey’s dependence on foreign sources, meet the needs of the Naval Forces Command and develop a deterrent weapon with national resources.

“There have been some sales,” Demir underlined, saying that the KARGU said various versions and models. He also mentioned that ALPAGU similarly will have more than one model.

He elaborated that interest in Turkey’s drones and in general in Turkey’s defense industry is increasing as the products are tested and potential buyers see them on the field.

Indicating that there are circles engaging in disinformation and trying to discourage purchases from Turkey, Demir once again mentioned the fake news on the KARGU, claiming that it poses risks due to its autonomous capacity.

“KARGU is a product that decides and is commanded completely with human initiative. Turkey is extremely sensitive in determining targets,” he stressed, saying that Turkey has the capability but did not install it in the product.

As a rotary-wing drone, the KARGU can carry various types of explosives, playing an efficient role in asymmetric warfare and the fight against terrorists.

The Alpagu, which differs from its predecessor in terms of its lighter structure, diving speed and low radar cross-section, is capable of creating pinpoint damage to high-value targets. The drone weighs less than 2 kilograms (4.4. pounds) and can only be matched by two platforms with similar qualities on the global market.

Despite its small size and light weight, the Alpagu carries enough explosives to neutralize its targets, can work at very long distances and is easy to transport. The Alpagu also boasts high artificial intelligence and image processing capabilities.

Speaking on the recently signed Shusha declaration signed between Turkey and Azerbaijan that envisages cooperation in the field of defense, Demir said that the issue is being discussed, with no concrete steps yet.

He said cooperation areas could possibly include the establishment of a UAV factory and Turkish engineers working in Azerbaijan to develop a new model of UAV or their engines – though these remain possibilities.

Demir mentioned that the most appropriate road map for both countries must be created.

Turkey has kamikaze drones and might also have kamikaze marine vessels, Demir underlined, saying that Turkey is considering furthering its capacities in this area.

Reiterating that mass production for the armed unmanned marine vessel (SIDA) started recently, Demir stated that the field of submarines is more difficult in this regard.

SIDA boasts a cruising range of 400 kilometers (249 miles) and a maximum speed of 65 kph (40 mph), as well as indigenous encrypted communications and day and night vision capabilities.

While SIDA can serve in intelligence-gathering missions, it also features a command and control system that allows all its movements to be remotely controlled and managed.

The vessel is equipped with the long-range anti-tank missile manufactured by Turkish rocket maker Roketsan.

Employment in the defense industry sector did not stop and grew during the coronavirus pandemic, Demir stated.

Demir also highlighted that the SSB puts high emphasis on women's employment in the sector. “The number of people working in the defense industry sector has increased four times in the past six years. Twenty-six percent of this increase is made up of women.”

He added that the personnel of the presidency is 40% women.

Turkey’s defense sector has undergone a huge transformation in the past decade. While only about 62 defense projects were carried out in 2002, this number has increased to 750 today, with around half of these projects started in the past five years.

Again in 2002 the budget of defense projects was about $5.5 billion and has now witnessed an elevenfold increase with $60 billion. On the other hand, the number of companies in the sector was 56 and is now 1,500 today.

Demir also stated that internships are especially significant for the sector and that although internships decreased during COVID-19, efforts on this will continue.

“We may start an internship campaign,” he said.

Demir hailed the progress made by Turkey in the sector and said: “Seven years ago, we had no system we could use with peace in mind. Even our rifles were not completely in mass production.”