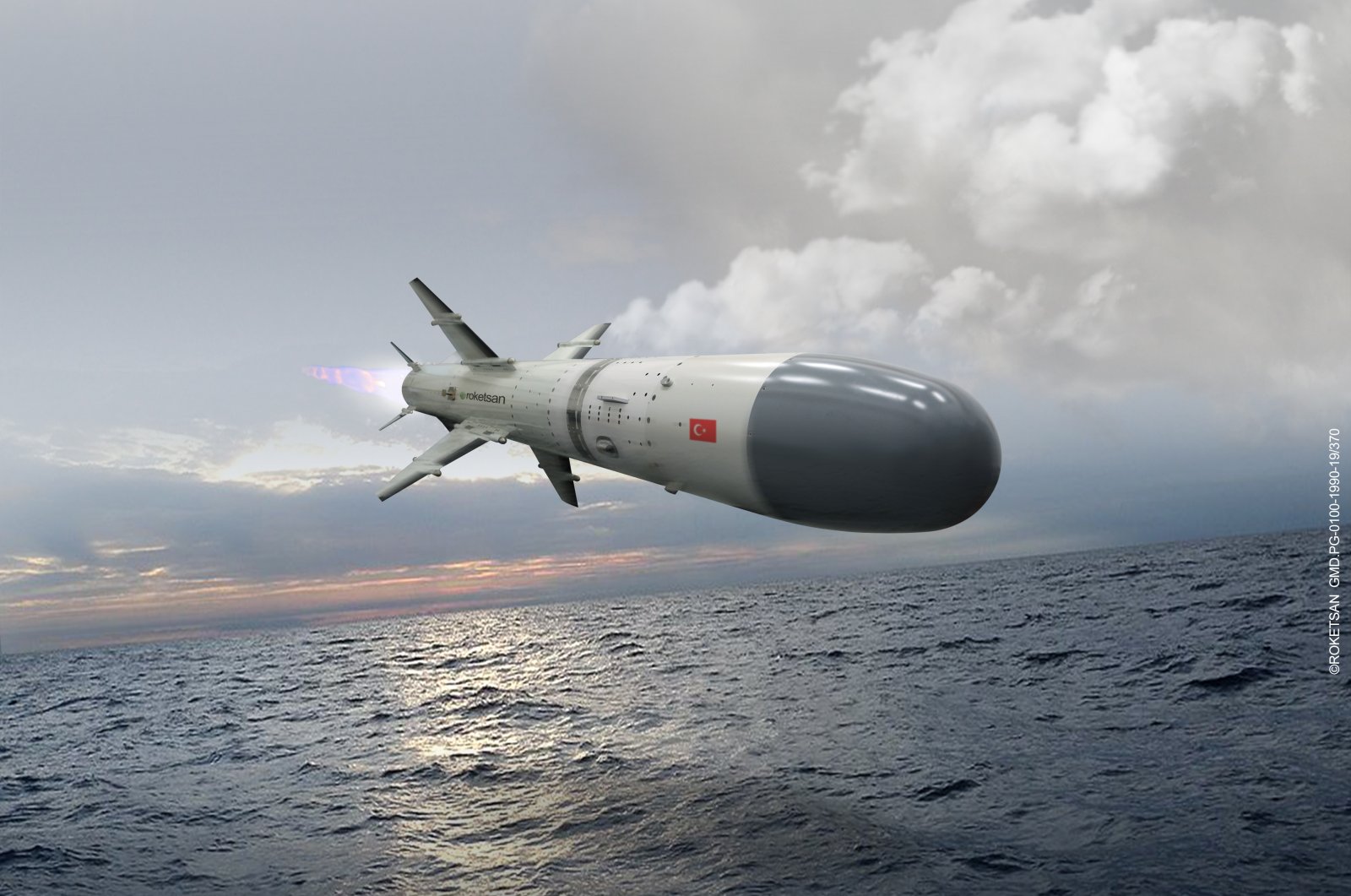 An artist's impression of Turkey's first anti-ship missile Atmaca. It is expected to be delivered to the Naval Forces at the end of this year, Sept. 26, 2020. (Photo by Roketsan via AA)
by DAILY SABAH Sep 29, 2020 12:53 pm
Edited By Ayşe Betül Bal
RECOMMENDED

He added that one last test was left for the anti-ship missile before it entered mass production.

Demir said on Twitter that Atmaca was test-fired with its own internal inertial navigation unit onboard, independent of the GPS. The test was successful and that the final test will be carried out with a warhead.This development also showcased the missile’s superior capability against electronic warfare (EW).

The development of the anti-ship missile began in 2009 and a deal for mass production was signed between the SSB and manufacturer Roketsan in 2018.

Roketsan Chairperson Murat Ikinci earlier said Atmaca cruise missile, which has a 250-kilometer (155-mile) range, is a national product that includes technology only available to a very few countries.

Ikinci also said the missile was being developed to meet the needs of the Turkish Naval Forces and can replace the imported missiles.

"We are also working on the land-to-land version of the Atmaca cruise missile," he said, adding that such technologies are set to make a serious contribution to the strength and expertise of Turkey's defense forces and industry.

The Naval Forces' inventory currently has the U.S.-made Harpoon anti-ship missiles. They are expected to be replaced by the Atmaca missiles that boast additional superior features.

The Atmaca missiles are expected to be used on corvettes built under Turkey's National Ship (MILGEM) project, along with other vessels and submarines that currently use Harpoon missiles.

The missiles are also expected to be used as their land-based versions for littoral security.

The country's first maritime missile will be powered with a fully indigenous KTJ-3200 engine, developed by Kale Group, the head of the SSB confirmed earlier.

Atmaca is a modern, all-weather guided missile. It is effective against fixed and moving targets thanks to its resistance to countermeasures, target update, reattack and task cancelation capabilities, as well as an advanced, 3D routing system.

The launch control systems for the missile were produced by the Turkish defense giant ASELSAN, while the fire control system was developed by the Turkish Naval Research Center Command (ArMerKom). The domestic missile was showcased at one of the world's leading defense fairs, the International Defense Industry Fair (IDEF'19), in Istanbul last year.

The missile hovers low above water and can reach its target both on a linear and a vertical plane. With this feature, the missile can reach a higher altitude when it gets closer to the target and can land on a target ship from directly above. The target of the missile can be changed even after launch and is highly protected against electronic jamming.

However, he said, the drones' entering service aboard the vessel may not be as quick as TCG Anadolu's entering into Naval Forces inventory as there will be additional works regarding deploying them on such a platform.

LHDs, which are small aircraft carriers, are characterized by a well deck, allowing the use of several types of aircraft including Vertical/Short Take-Off and Landing (V/STOL) and Short Take-Off and Vertical Landing (STOVL) fighter jets, and also enabling the transfer of large numbers of military personal and armored vehicles.