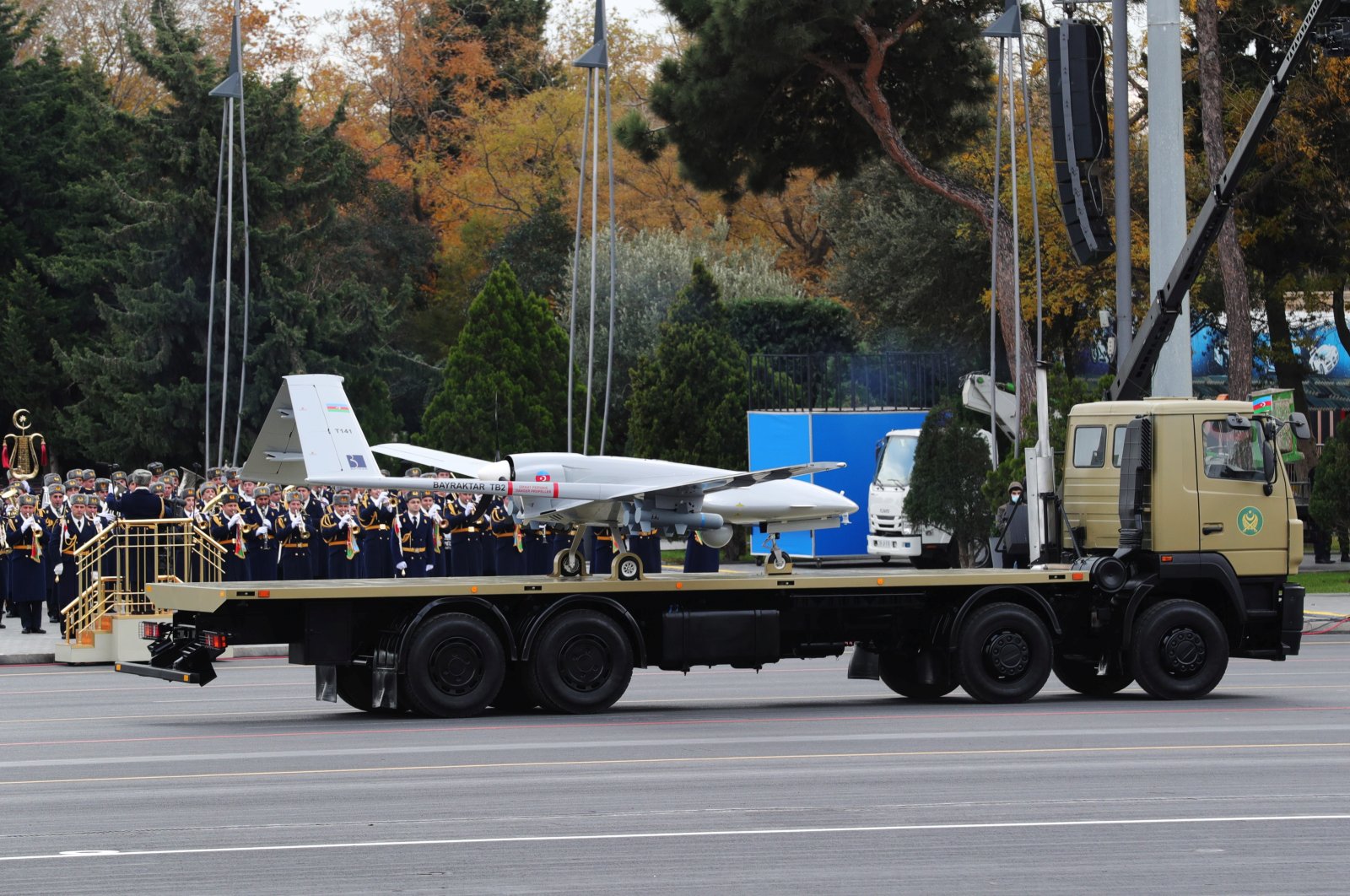 2020 was a success for the local defense sector thanks to completed projects, growing exports and products that proved themselves on the field, including Turkey's advanced UAVs, the new armies of the sky

Humanity has undergone and still is trying to overcome a horrible year, one that could easily be dubbed our annus horribilis. Besides health care, almost all sectors have taken their share of the hit from the COVID-19 pandemic that sent shock waves around the world. But one sector, the defense industry, was among those that kept growing.

The Turkish defense industry, in particular, not just completed several critical projects but with the use of its products in recent conflicts, made headlines in local and international media throughout the year. It is now looking ahead with even more ambition.

One of the primary motives behind the rapid progress of Turkey's defense industry, which maintained growth last year, is the sanctions on the country in the recent past. Instead of remaining idle amid the sanctions, Ankara fostered a defense industry from scratch now capable of exporting products worldwide while also driving the development of cutting-edge systems, like unmanned aerial vehicles (UAV).

These UAVs have been used by the Turkish Armed Forces (TSK) in recent conflicts in neighboring Syria against terrorist elements and the brutal Bashar Assad regime. They've also seen action in war-torn Libya and were used by the Azerbaijani army in Nagorno-Karabakh. This use has raised questions about whether the relatively cheaper aircraft may eventually replace expensive advanced fighter jets. The answer is no, not entirely.

In an exclusive interview with Daily Sabah, Turkish defense analyst Hakan Kılıç said he expects a clear-cut task sharing between UAVs and manned aircraft in the future.

"I think, in the near future, UAVs will even replace electronic jamming aircraft, while the tasks of manned systems will focus on carrying anti-radiation and cruise missiles, heavy bombardment and air to air missions," he said.

Further explaining the tasks of both vehicles and the missions that have been carried out by the UAVs in the field, including the ones dubbed global, Kılıç said drones can perform almost all of the tasks executed by larger aircraft "when air superiority is established" and that they "can operate under the air umbrella provided by combat aircraft."

For example, he continued, we saw the most recent example of this in Operation Spring Shield – a cross-border military operation kicked off on Feb. 27, 2020, by the TSK against Syrian regime elements – in retaliation for an attack that killed 33 Turkish soldiers.

"If Turkish F-16s did not intercept the warplanes of the Assad regime with their beyond-visual-range air-to-air missiles (BVRAAM) by conducting a combat air patrol (CAP) mission along the border, Turkish UAVs Bayraktar TB-2 and Anka-S would not have been able to operate in the region," he said.

However, Kılıç continued, "Would this have been accomplished if the F-16s did not remotely protect the Turkish UAVs in the Syrian airspace without entering the country's airspace due to military and political obstacles?"

"If the two Syrian SU-24 and one L-39 warplane that came to hunt the Turkish drones were not downed by our F-16s, how would the UAVs protect themselves?" he rhetorically asked, pointing out the unavoidable cooperation between fighters and UAVs.

"Many Russian-made Syrian air defense missile systems were destroyed by the drones this way," Kılıç said. The destruction of the Russian systems, video footage of which was published later, continued in Nagorno Karabakh as well. There, the drones were used by Baku, who has previously purchased them from Turkey, and the air defense systems were deployed by Armenia, who were fighting an already losing battle on occupied Azerbaijani lands.

As for Turkey, which has a vast number of UAVs in its fleet, Kılıç said the goal is not to replace fighter aircraft but to help in the country's almost 40-year struggle against the terrorist organization, the PKK.

"I mean, if we were fighting a long war with a state, instead of terrorist organizations, such as the PKK, in the last five years when the UAVs started to be produced en masse, then we would see fewer drones and more fighter jets added to the inventory of our armed forces," he said.

Ankara has also targeted the PKK's Syrian and Iraqi offshoots along with Daesh terrorists, where the drones were used against nonstate actors in an irregular warfare concept. Operation Spring Shield was the first time Ankara staged successful coordination of UAVs, fighter jets and electronic warfare (EW) systems.

Turkey benefits not only from being able to produce drones domestically, at a relatively cheaper cost but also from the increasing variety of ammunition to serve as payloads for drones that scout out and neutralize armored land vehicles like tanks, howitzers and air defense systems from afar. This versatility paves the way for their common use and popularity.

The Guardian newspaper most recently reported that the United Kingdom wants to embark on a new armed drone program after studying the success of Turkish Bayraktar drones in the recent Nagorno-Karabakh conflict.

"Defense officials believe that Azerbaijan's use of cheaper Turkish drones in the six-week autumn war was crucial in defeating the Armenians," the country's Ministry of Defense officials were cited by the paper as saying. Several independent analysts used drone footage to document the Armenian losses, tallying at least 185 battle tanks.

Azerbaijan State University of Economics (UNEC) academics have also calculated the extent of the Armenian Army's material losses in weapons and vehicles during the 44-day war, revealing that $4.8 billion worth of arms belonging to Armenia were destroyed. This, thus, is said to have reshaped the offense-defense balance.

"However, if Azerbaijan had used manned warplanes instead of TB-2s and kamikaze drones to destroy Armenian air defense systems and S-300s, it could have suffered many casualties," Kılıç said, stressing that today, Turkish-made UAVs have proven themselves on the field in Syria, Libya and Azerbaijan and have broken new ground.

Turkey, meanwhile, has also developed twin-engine medium-altitude long-endurance (MALE) drones like Bayraktar Akıncı and the TAI-made Aksungur, which were designed to carry air-to-air missiles when mass-produced. With a payload of 12 smart ammunition, the UAV Aksungur increased nonstop flight time by staying in the air for 49 hours at an altitude of 20,000 feet (6,096 meters) during the 59th test flight conducted in September 2020. TAI CEO Temel Kotil on Dec. 31, 2020, said the mass production of the Aksungur started in 2020 and that five UAVs are set to be delivered to security forces soon. Bayraktar Akıncı's second prototype also successfully passed the 20,000-foot altitude test in August 2020.

Kılıç emphasized that eventually UAVs are set to function like fighter jets thanks to advanced artificial intelligence (AI) technology rather than relying on aviation technology. However, he also said extensive testing is critical in terms of the drones completing various tasks and targeting enemy positions without endangering military personnel.

Though drone use and its role in modern warfare are open to further discussion, one more point must be noted: Both in Libya in 2019 and at the beginning of 2020 and last fall in Armenian-occupied territory, the most effective elements were not soldiers on the ground but made-in-Turkey drones. Certain leverage has been earned following their success: psychological superiority.

European Council on Foreign Relations' Ulrike Franke, an expert on drone warfare, said: "Using drones is like having a film crew with you."

Turkish drones, along with Israeli kamikaze drones, had a demoralizing effect on the Armenian forces, especially after the drone footage spread on social and conventional media. Armenian journalist Tatul Hakobjan was cited by German Tagesschau as saying, that "as soon as the drones were heard, they had seven seconds to run away," demonstrating the video game-like operations of drones.

Last but not the least, the unprecedented operations conducted by drones that demonstrated Turkey's expertise in the sector, paved the way for new opportunities for more exports and cooperation. Apart from Azerbaijan, a long-time ally and brotherly nation to Turkey, Kazakhstan and Serbia have also expressed interest in purchasing the UAVs.

Ukraine, on the other hand, which previously bought Bayraktar TB2s from Turkey, has carried these business ties to a higher level. The two countries are now planning the joint production of UAVs along with technology transfer. The country's littoral Black Sea neighbor will also acquire Turkey-made navy corvettes. Kyiv and Ankara inked the related agreement on Dec. 15 for the National Ship (MILGEM) project's Ada-class corvettes, four of which have already been added to the Turkish navy's inventory, and four others are under construction for the Pakistani Navy. Those vessels can be designed and equipped with new features per the needs and demands of purchasing countries, like the ones tailored for Pakistan.

A defense source familiar with the issue, who spoke to Daily Sabah on the condition of anonymity, said Ukraine is set to provide know-how for different kinds of turbine engines to Turkey and that the establishment of a joint company is on the agenda for the technology transfer.

Engine projects that would be acquired from Ukraine could cover many different products, including UAV engines, frigate turbines and turbofan engines for Atmaca long-range, precision strike, anti-ship cruise missiles, which were developed domestically and tested in 2020.

MILGEM, in particular, was one of the many major projects that gave Turkey an upper hand at sea. Besides the four corvettes, an I-class frigate is nearly ready to join the fleet, while the country is preparing to receive its first domestically manufactured Multipurpose Amphibious Landing Helicopter Dock (LHD) assault ship, the TCG Anadolu, soon.

After completing the tests on Gökdoğan – one of the two missiles domestically developed under Turkey's first air-to-air missiles project – and nearing delivery for the anti-ship missile Atmaca to the navy, the country's defense industry has also announced in the last days of 2020 a new project to develop a lightweight torpedo.

The defense source, who defined the projects as an important step to contribute to the Turkish Naval Forces' switch to locally made projects, said it will add muscle to the navy's power in terms of anti-submarine warfare.

The prototype of Turkey's first armored unmanned surface vessel (AUSV), the first product from the ULAQ series that was developed by Ares Shipyard in cooperation with the Ankara-based Meteksan Defense Industry Inc., was completed in December 2020 as well, the source said, pointing out that the country is not solely interested in unmanned aerial vehicles but upgrading its defense industry by leaps and bounds in each field.

The industry saw its exports soared 34.6% and hit $2.7 billion (TL 20.09 billion) in 2019 from $2.03 billion in 2018. It was the first-time defense exports had surpassed $2 billion. The sector recorded a very successful year in 2020 in terms of exports, despite the pandemic taking a heavy toll on global export chains. Various defense firms separately made statements throughout the year on how they boosted production despite the pandemic. They continue to conduct meetings to ink new foreign sales deals, while some cinched agreements right up to the last days of the year.

On Dec. 31, delivering the last good news of the year, ASELSAN released a statement via the company's Twitter account. It said the company has signed a $38.2 million export deal for the sales of command and control systems, anti-tank missile launch systems, inertial navigation systems and firing point detection systems with an undisclosed foreign customer.

All of the developments signal a year of more projects and boosted foreign sales for the Turkish defense industry and its products are likely to earn themselves more coverage in international media.