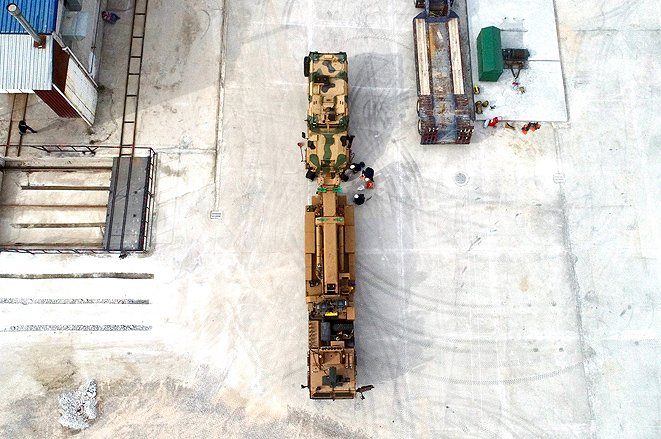 The coronavirus outbreak did not halt the production and delivery of the Turkish defense industry, especially in local supply channels, as a new group of M4K Partially Mine-Protected Recovery Vehicles were delivered to the Turkish Land Forces Command, the Defense Industries Presidency said in a statement Tuesday.

The statement, which was shared on the presidency’s Twitter account, said the new delivery of the vehicles developed by Konya-based MPG Machinery Production Group Inc. Co. was completed.

The M4K vehicles, upon qualification tests of which were successfully completed in January 2020, will be used in case of accidents or for the recovery of malfunctioning tactical wheeled vehicles of the military.

The rescue vehicle, weighing 46 tons, which is suitable for all kinds of terrain and weather with 8-by-8 wheel configurations, was subjected to numerous tests such as pulling, lifting, tilt, speed, climbing and detonation. The M4K, which has space for four people and can reach a speed of 80 kilometers per hour (almost 50 mph), provides high protection against mines, improvised explosive devices (IED) and kinetic energy ammunition as well as anti-ballistic protection.

A total of 18 M4Ks have been delivered so far with the first batch of five vehicles delivered in March and five of them delivered in April. The last eight of them were delivered through May, while some 29 M4Ks are set to enter the inventory as part of the signed protocol with the company.

The vehicles are integrated with 8-by-8 Seyit tank transporters as the armored transporting platform, which was also developed domestically. Passive armor protection, firefighting and explosion suppression systems are also part of the vehicle, along with the CBRN (Chemical, biological, radiological and nuclear) defense systems, frequency mixers and ASELSAN-developed SARP remote-controlled weapons systems.