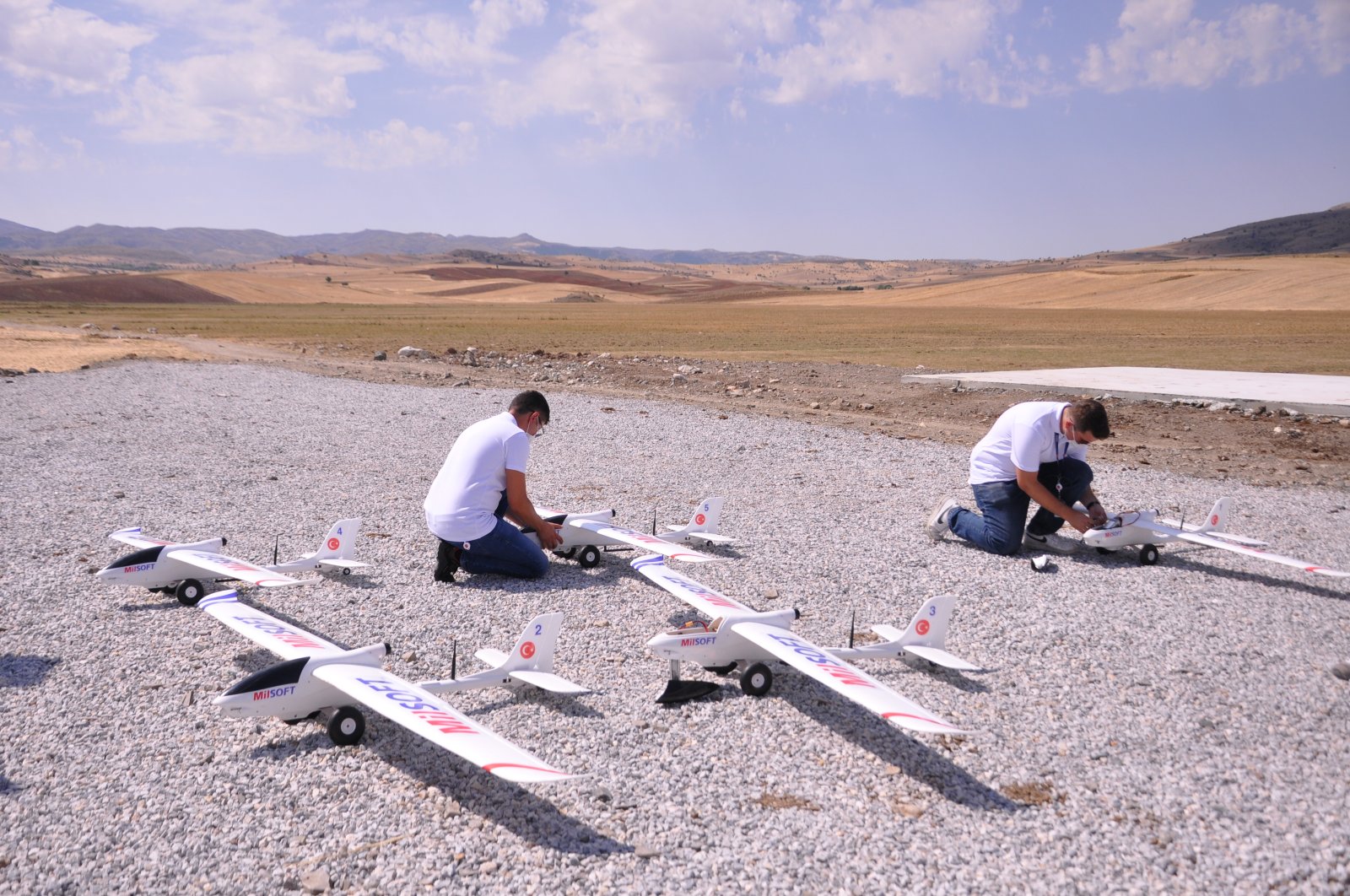 Unmanned aerial vehicles to be used in a herd concept by MilSOFT software are seen in this photo provided on Nov. 19, 2020. (Photo by MilSOFT via AA)
by DAILY SABAH WITH AA Nov 19, 2020 3:00 pm
Edited By Ayşe Betül Bal
RECOMMENDED

The company developed the MilSOFT drone swarm software with its own resources, which took about four years to complete. It can operate on both fixed and rotary-wing UAV platforms.

The usage of swarm UAVs, which provide advantages such as low hardware costs, difficult detection by enemy forces and asymmetric threats against large platforms, enables it to complete tasks in a shorter amount of time with just a single platform. With a concept like this, missions can also be completed in dangerous areas without risking human lives.

While many countries have yet to try drone swarm technology in a simulation environment, Turkey is among a limited number of countries that have the technology and had the ability to test it on the field during operations in recent years.

Turkey’s Presidency of Defense Industries (SSB) has been supporting a series of projects in the field of herd UAVs. The Swarm UAV Technology Development and Demonstration project initiated by the SSB aims to develop algorithms and software for the use of unmanned platforms with the swarm concept and the participation of micro-scale companies and small- and medium-sized enterprises (SMEs).

MilSOFT, which has broken ground in the field of system integration and software development with its domestic and national solutions since 1998, is among the participants of those projects by the SSB.

The company has already been offering Turkish Armed Forces (TSK) personnel the ability to identify automatic moving target detection and target identification with a high success rate and precision by using artificial intelligence (AI) and machine learning techniques with the image processing algorithms it has uniquely developed.

With the integration of intelligence and image evaluation solutions, currently used drone swarms will be given additional capabilities to the existing intelligence systems capabilities such as reconnaissance, detection, recognition, search and rescue, and vehicle tracking.

The local company’s software-based solution will allow swarms of UAVs to be released from planes and other platforms, and the images they obtain will enter the aerial image, while the vehicles in the flock will be able to transfer images between the units with a relay function.

Elements that cannot be caught via a human eye will be detected with the support of AI, and multiple attack capabilities will be made possible by arming the vehicles.

According to another usage scenario, with MilSOFT's solutions, when commands are given from helicopters, the UAV swarm accompanying it will be able to perform a frontal attack and provide operational support.

The UAV swarm can operate completely autonomously from the beginning to the end of a mission and can be instantly monitored and controlled via the intelligence applications MilSOFT provides.

The vehicles in the herd have a flight time of more than half an hour and a payload capacity of 1 kilogram (2.2 pounds). The vehicles work with landing gear that can land on rough terrain.

While five UAVs are currently used in a herd on the field, this number can reach up to 25 in the simulation environment. MilSOFT aims to make a UAV swarm of 50 operational vehicles soon.

Communication between UAVs is also provided by MilSOFT's own solutions. Vehicles can communicate with each other from up to 500 meters (1,640 feet). There is also a 10-kilometer network solution for data transfers.

MilSOFT aims to transfer its solution to underwater and surface platforms and land vehicles.