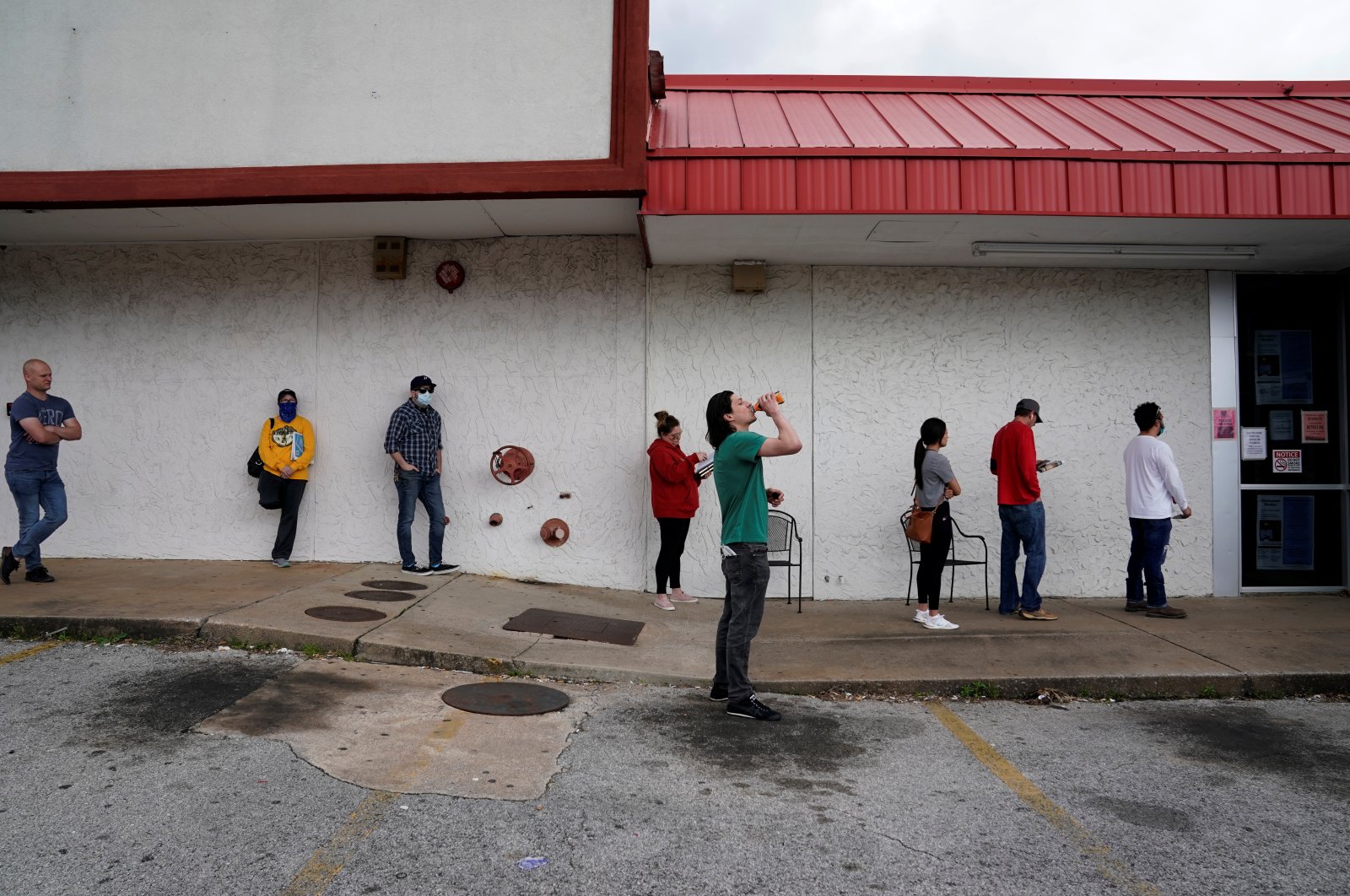 People who lost their jobs wait in line to file for unemployment following an outbreak of the coronavirus disease (COVID-19), at an Arkansas Workforce Center in Fayetteville, Arkansas, U.S., April 6, 2020. (Reuters Photo)
by Compiled from Wire Services Apr 23, 2020 1:46 pm
Edited By Ayşe Betül Bal

Another 4.4 million Americans filed for unemployment benefits last week as the coronavirus shuttered businesses. Economists forecast that the unemployment rate could go as high as 20% in April

More than 4.4 million laid-off workers applied for U.S. unemployment benefits last week as job cuts escalated across an economy that remains all but shut down, the government said Thursday.

Although new figures are down from a revised 5.24 million the week before, the latest data brings the cumulative unemployment benefits claims to more than 26 million since the week ending March 21, which means that about one in six American workers has now lost their jobs since mid-March, by far the worst string of layoffs on record.

The announced data confirms that all the jobs created during the longest employment boom in U.S. history were wiped out in about a month as the novel coronavirus ravages the economy. The economy created 22 million jobs during the employment boom which started in September 2010 and abruptly ended in February this year.

The enormous magnitude of job cuts has plunged the U.S. economy into the worst economic crisis since the Great Depression of the 1930s.

Some economists say the nation’s output could shrink by twice the amount that it did during the Great Recession, which ended in 2009.

President Donald Trump, who is seeking a second term in the White House in November's general election, has been anxious to restart the paralyzed economy. Trump on Wednesday applauded steps taken by a handful of Republican-led states to begin reopening their economies, despite warnings from health experts of a potential new surge in infections.

"The U.S. economy is hemorrhaging jobs at a pace and scale never before recorded," said Scott Anderson, chief economist at Bank of the West in San Francisco. "It compares to a natural disaster on a national scale."

A Reuters survey of economists expected initial claims for state unemployment benefits to total 4.2 million in the week ended April 18.

Last week's claims report covered the period during which the government surveyed business establishments for the nonfarm payrolls component of April's employment report. Economists were forecasting as many as 25 million jobs were lost in April after the economy purged 701,000 positions in March, which was the largest decline in 11 years.

"It wipes out all the job gains during the long expansion," said Joseph Brusuelas, chief economist at RSM in New York. "Once the economy begins to reopen initial claims will slow, but we have to be honest, not everyone is going to get their jobs back."

The slaughter of the labor market adds to collapsing oil prices, retail sales, manufacturing production, homebuilding and home sales in reinforcing economists' contention that the economy entered recession in March.

The National Bureau of Economic Research, the private research institute regarded as the arbiter of U.S. recessions, does not define a recession as two consecutive quarters of decline in real gross domestic product (GDP), as is the rule of thumb in many countries. Instead, it looks for a drop in activity, spread across the economy and lasting more than a few months.

Though weekly jobless filings remain very high, last week's data marks the third straight weekly decline, raising hopes that the worst may be over. Weekly claims appeared to have peaked at a record 6.9 million in the week ended March 28.

"Claims that have been backlogged due to capacity issues should continue to be processed, with initial claims dropping to more normal, but still elevated levels," said Andrew Hollenhorst, an economist at Citigroup in New York. "While layoffs and furloughs are likely to continue across a number of industries in the coming weeks, we are cautiously optimistic that the peak in layoffs following initial widespread closures has occurred."

Some of the decline in claims has been attributed to a historic $2.3 trillion fiscal package, which made provisions for small businesses to access loans that could be partially forgiven if they were used for employee salaries. The U.S. Senate on Tuesday approved $484 billion in a fresh relief package, which mainly expands funding for loans to small businesses.

With claims expected to gradually decline in the coming weeks as more small enterprises access funding, attention will shift to the number of people on unemployment benefits rolls.

Next week's continuing claims data will offer some clues on the magnitude of the anticipated surge in the unemployment rate in April. Continuing claims have not increased at the same pace as initial jobless applications.

Economists believe some people thrown out of work because of state-mandated "stay-at-home" orders found employment at supermarkets, warehouses and delivery services companies. They expect the unemployment rate will shatter the post-World War II record of 10.8% touched in November 1982. The jobless rate shot up 0.9 percentage points, the largest single-month change since January 1975, to 4.4% in March.