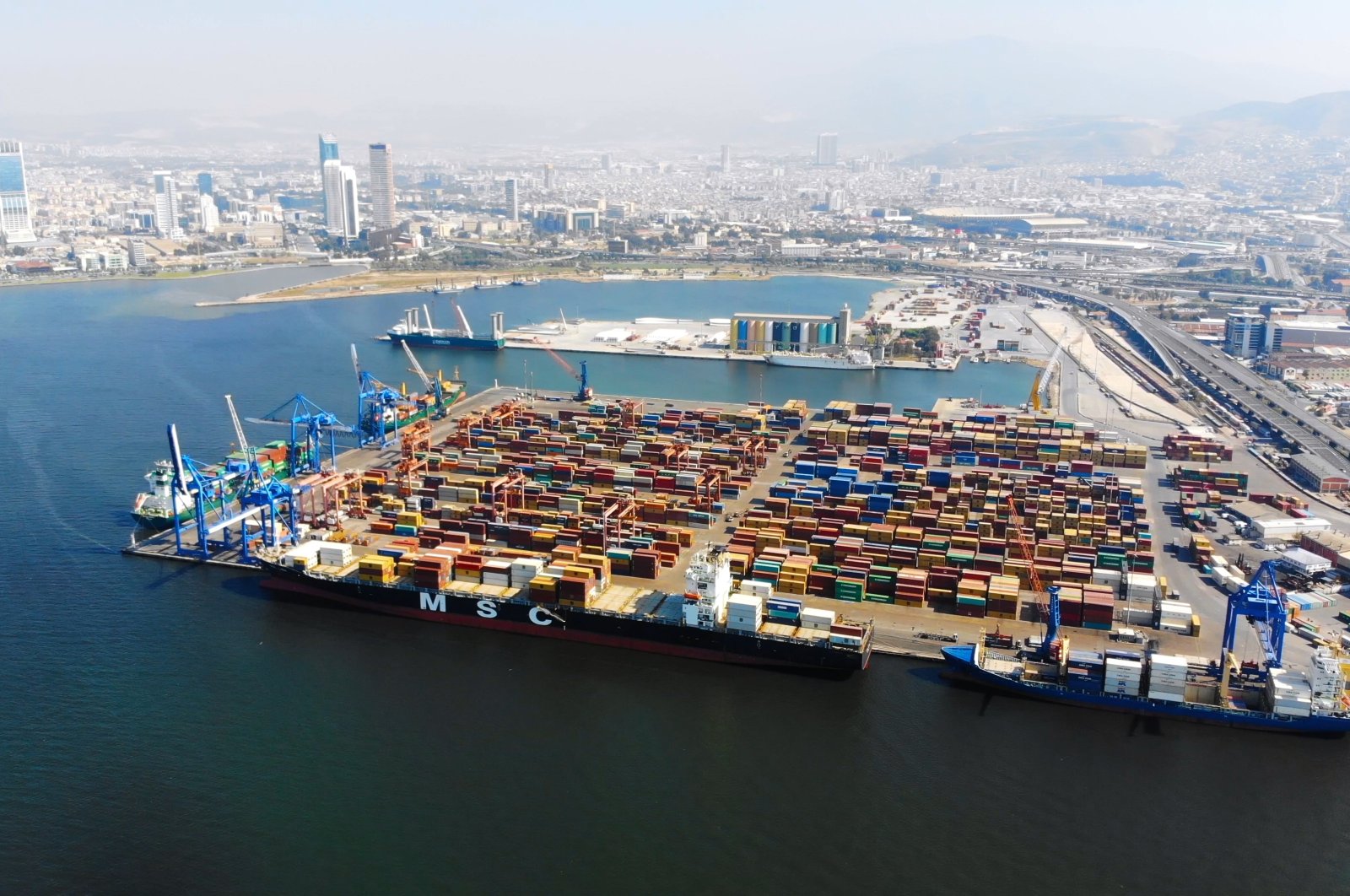 Containers are seen at a port in Izmir, western Turkey, in this undated photo. (Shutterstock Photo)
by Daily Sabah Jul 02, 2022 1:32 pm
RECOMMENDED

There is no slowdown in sight for Turkey’s exports, which ended the first half of 2022 by breaking records each month, firmly marching toward achieving the annual target even before the year-end.

Yet, the January-June period has been highlighted by a widening trade deficit that has been fueled by soaring energy costs, primarily driven by Russia’s invasion of Ukraine.

Imports were up nearly 40% on an annual basis to $31.6 billion, Muş told an event in the eastern province of Erzurum to announce the preliminary trade figures.

Energy alone accounted for a whopping $8.1 billion, pushing the foreign trade deficit to nearly $8.2 billion, an 184% increase from $2.87 billion a year ago. The gap had hit a record high of $10.7 billion in May.

The government’s push to increase exports has garnered great success as the high volumes recorded last year have continued to grow in the first six months of 2022, the minister said.

“In the first six months of 2022, we reached the highest monthly export value and made it six out of six.”

Turkey’s energy imports in the first half have jumped 155% year-over-year to $47.8 billion, said Muş, stressing the impact of soaring energy prices.

“About 57% of our total import growth was caused by energy imports,” the minister said. “The energy-related foreign trade deficit that we are facing today is a result of rising energy prices all over the world.”

Exports had ended 2021 at $225.4 billion, a figure that government and economists expect to reach $250 billion this year.

The 12-month rolling export figure reached $246.2 billion as of May, Muş said.

Newly selected Turkish Exporters Assembly (TIM) Chair Mustafa Gültepe reiterated views that the goal would be reached even before year-end.

Exporters have managed to achieve records in 20 of the last 22 months, said Gültepe.

“The preliminary forecasts show that we will continue our path unabated in the second half of the year and we will reach our export target of $ 250 billion before the end of the year,” Gültepe said.

The chemicals industry again outpaced the automotive sector as it hit $3.2 billion in exports to rank first in June, a 34.6% year-over-year increase, the data showed.

The automotive industry followed with $2.7 billion, a 17.9% jump from a year ago, and the steel sector with $2.3 billion, an increase of 14.6% compared to the same month of 2021. The ready-to-wear industry made sales worth $2 billion, while the electric-electronics sector’s exports reached $1.4 billion.

The defense and aviation industry registered the highest increase in exports, as its foreign sales soared 42.2% in June to nearly $315.1 million, up from $221.63 million a year ago.

Germany remained the top market as it received nearly $1.87 billion worth of Turkish goods last month, a 9.8% growth from a year ago, the data showed.

“Besides these countries, there are significant increases in our exports to Romania, the United Arab Emirates and South Africa,” said Gültepe. “We have reached records in exports to exactly 18 countries, including Russia, South Korea, Argentina and India.”

In contrast, most imports were made from Russia, totaling more than $5 billion, a 118.3% year-over-year increase. It was followed by China, from where imports increased nearly 28.6% to $3.66 billion, and Germany, from where purchases jumped 4% to $1.99 billion, the data showed.

Sales to 27 European Union member states – where half of Turkey’s exports go – amounted to $9.7 billion. Imports, on the other hand, totaled over $8 billion.

Exports to Near and the Middle East countries reached $3.86 billion, according to the data.

Gültepe said 1,905 firms joined the exporters' family and made imports for the first time in June, amounting to around $80 million.

At a time when the world is struggling with economic difficulties triggered by high inflation and rising energy prices, Gültepe suggested that Turkey continues to take strong steps in the economy with goods and services production.