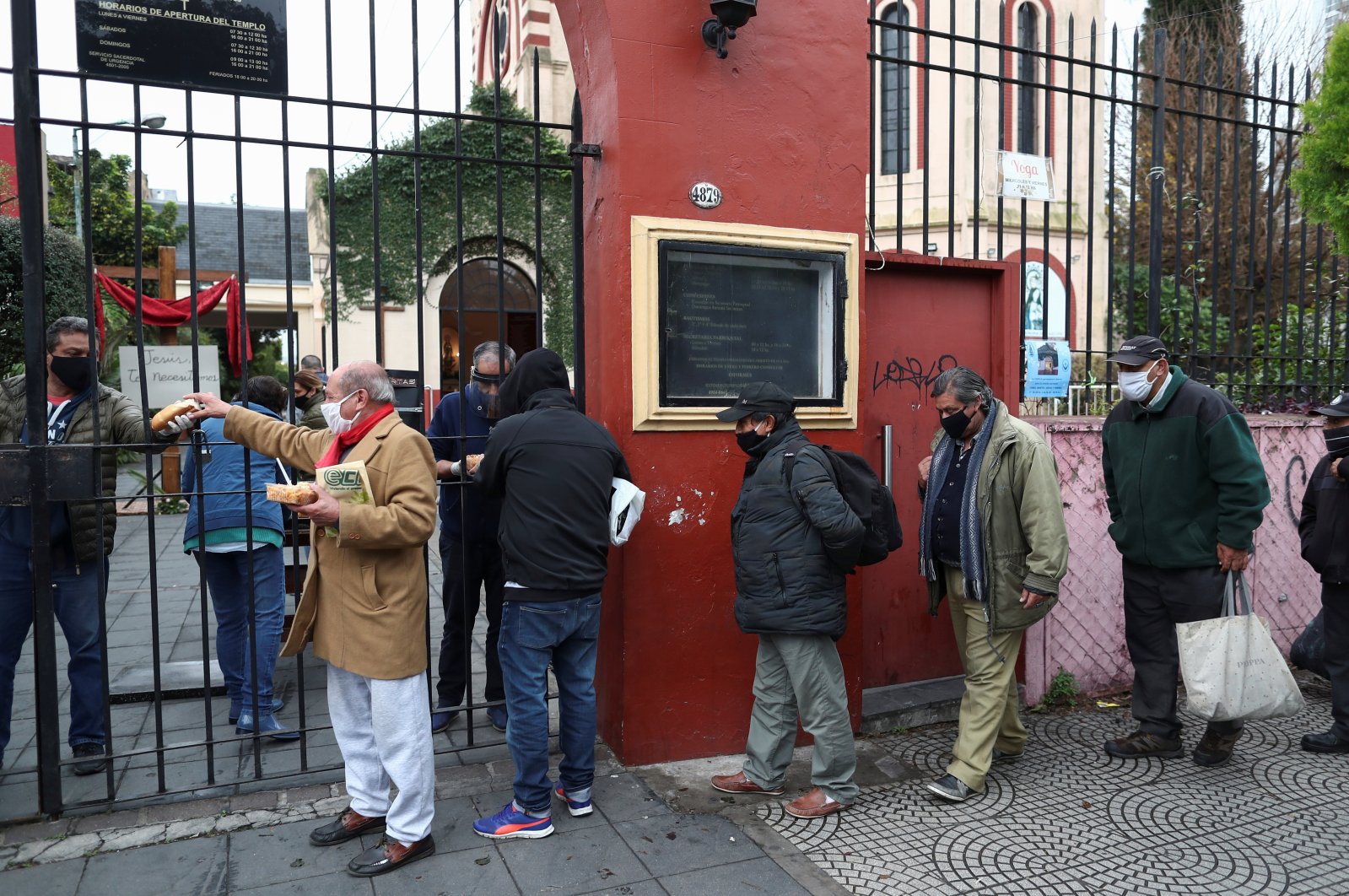 People line up to receive a ration of stew at a soup kitchen organized at the Caacupe church, during the coronavirus outbreak, in Buenos Aires, Argentina, July 23, 2020. (Reuters Photo)
by REUTERS Aug 05, 2020 3:13 pm
RECOMMENDED

It took months of tough talks for Argentina to reach an agreement on restructuring $65 billion in debt. Now, economists and policymakers say, the real work begins: reviving Latin America's No. 3 economy from its currency and fiscal crises.

Though both government and creditors celebrated Tuesday's deal that should help Argentina avert a messy default, it still faces an over 10% contraction this year, an overvalued peso, spiking poverty and a deep fiscal hole.

"This was the easy step," Stephen Liston, senior director at the Council of the Americas, said of the debt deal.

How the once-wealthy grains producer does from now on is the acid test for Peronist President Alberto Fernandez and his star Economy Minister Martin Guzman, fresh from taming Wall Street.

"This is an important step," Guzman said of the agreement. "But this does not solve all the problems of the Argentine economy."

Argentina's peso has been propped up by tight capital controls. The country has seen the value of the currency in black market trades veer dangerously away from the official rate, with the gap currently around 76%.

The government says it plans to ease controls, but only when the economy has been righted, leaving an artificially strong peso that businesses say hinders trade.

"It's a very precarious situation there where you've got an over-valued currency, but weakening it will only worsen the debt situation," said Nikhil Sanghani of Capital Economics in London.

Inflation, the thorn in the side of Argentine policymakers for years, shows little sign of abating. Consumer prices have slowed during the pandemic, but remain at an annualized level above 40% and will likely revive as the economy recovers.

Getting out from under this would likely mean the bank has to raise interest rates to encourage savings in pesos, he added, otherwise it would risk unleashing a new wave of inflation.

Under the weight of public spending to combat the impact of the pandemic, the primary fiscal deficit soared to $3.53 billion in June and the government is expected to end the year with a large fiscal hole.

Guzman has pledged to return to fiscal balance and keep the deficit under control but faces a politically tricky balancing act between that and growth-boosting policies.

"The fiscal deficit has blown out again, and we think that the primary deficit will be something like 8% of (gross domestic product) GDP this year," said Sanghani, adding it could force the government to adopt politically unpalatable measures even as millions face increased poverty.

"If they have to impose some sort of austerity going forward, it will only keep the economy quite weak and that will hinder its ability to pay off even these restructured debts."

The government plans to turn attention to negotiating a new program with its biggest creditor, the International Monetary Fund (IMF), which floated a $57 billion line in 2018.

Argentina may seek to extend its payment schedule in return for lowering inflation, fixing the exchange rate and reeling in public spending, said Claudio Loser, a former director at the IMF's Western Hemisphere department.

"That would help Argentina a lot in the next decade if it can be done," Loser said.

But despite a softer approach from the IMF, any deal would likely come with some tough fiscal demands.

"It's feasible that the Fernandez government is hesitant on some of these terms," Sanghani said. "There are still some hurdles to getting a renewed IMF deal, so it's not a forgone conclusion by any stretch of the imagination."