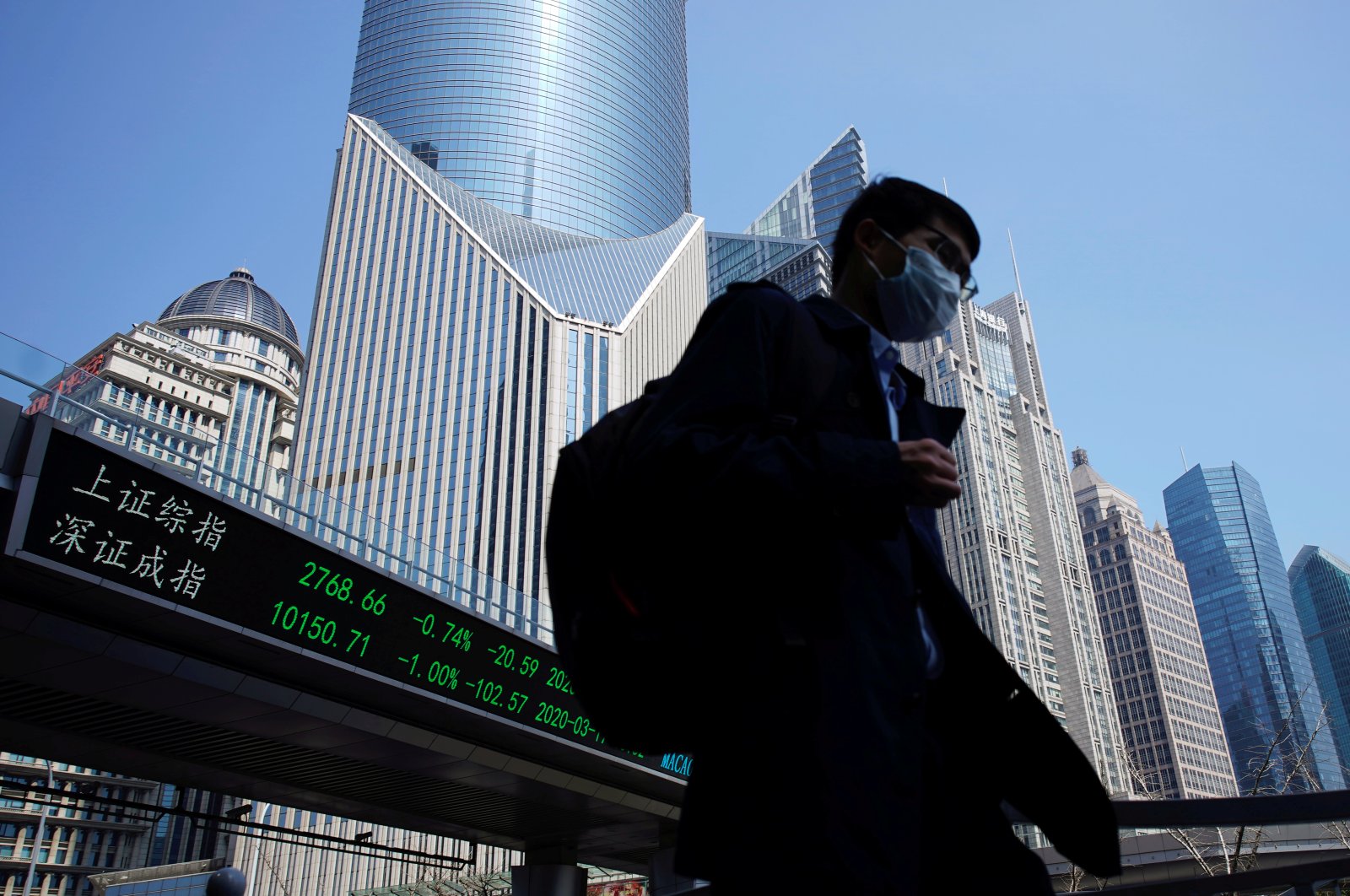 A pedestrian wearing a face mask walks near an overpass with an electronic board showing stock information, following an outbreak of the coronavirus disease (COVID-19), at Lujiazui financial district in Shanghai, China, Tuesday, March 17, 2020. (Reuters Photo)
by REUTERS Apr 06, 2020 3:07 pm
RECOMMENDED

Companies in the Asia Pacific need to raise a near-record $69.3 billion to refinance their existing borrowings in the second quarter, Refinitiv figures show, as the region’s capital markets remain turbulent due to the coronavirus pandemic.

The level of U.S. dollar corporate debt due to mature in the region, including Japan and China, is the second-highest on record and only slightly behind the $71.4 billion that was due during the same time last year.

Some of China’s largest state-owned enterprises are the leading contenders to refinance debt with oil giant Sinopec Group, which has a 5-year bond worth $2.48 billion maturing in April while power utility State Grid has a three-year $898.5 million bond expiring at the same time, according to Refinitiv.

The data shows a Soft Bank Group bond worth $2.48 billion due to mature on April 18, and the conglomerate flagged it planned to carry out $41 billion worth of asset sales to buy back shares and pay down debt.

Australia’s banks are likely to be active in the U.S. dollar bond markets in the next few months with National Australia Bank and Westpac Banking Corp. having a combined $3.14 billion worth of bonds due to expire.

The rush of refinancing deals comes as Asia’s debt markets are performing well behind the rest of the world.

Bankers said well-known corporates should be able to refinance but lower-rated companies and those with ratings considered "on the edge" by rating agencies could face trouble.

“Massive stimulus has been provided by governments worldwide as they seek to keep the wheels turning. It remains to be seen how this will translate into support for the more challenged credits in the coming weeks,” said Raj Malhotra, head of Societe Generale’s Asia Pacific debt capital markets (DCM) unit.

“Companies are looking at all forms of alternative financing, including bank loans and local currency markets, to manage financing,” she said.

The majority of the Asian volume was made up of Chinese search engine company Baidu Inc. and insurer AIA raising $1 billion each last week.

Nomura’s head of Asia, excluding Japan, DCM syndication Alister Moss said Asian markets were lagging the U.S. and Europe because of their respective central banks’ moves to allow increased credit purchases which gave bond markets confidence. “We don’t have that in Asia, and so our market is recovering more slowly.”