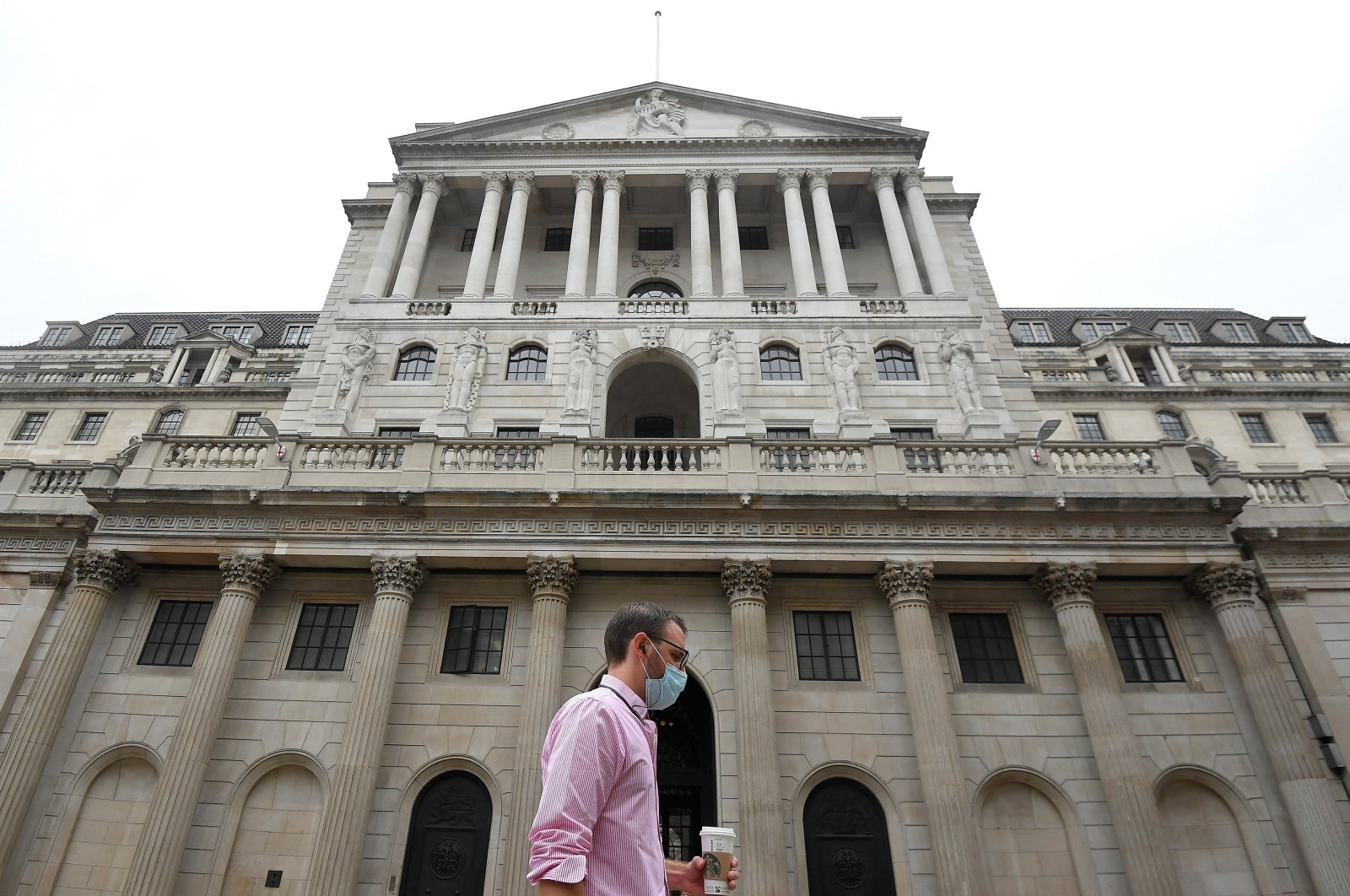 A worker wearing a protective face mask walks past the Bank of England in the City of London, Britain, Aug. 6, 2020. (Reuters Photo)
by compiled from agencies Aug 06, 2020 1:22 pm
RECOMMENDED

The Bank of England (BoE) held off on providing more monetary stimulus on Thursday as Britain reopens after the pandemic lockdowns, but it warned it would take time for the economy to heal and unemployment would keep rising this year.

While the central bank forecast that the economy would shrink less than previously expected this year, it said gross domestic product (GDP) probably won’t return to pre-pandemic levels until the end of 2021 as spending by consumers and businesses remains weak.

“The outlook for the U.K. and global economies remains unusually uncertain," the bank said in a statement. “It will depend critically on the evolution of the pandemic, measures taken to protect public health and how governments, households and businesses respond to these."

The central bank’s Monetary Policy Committee kept its benchmark interest rate at a record low of 0.1%. It also kept its target for buying government and corporate bonds – by which it injects money into the economy – at 745 billion pounds ($980 billion). The decisions on rates and economic stimulus were widely expected as the uncertainty over the pandemic could require more action later, economists say.

Speaking to reporters, the bank’s Governor Andrew Bailey said negative rates were part of the central bank's stimulus options, but they were not about to be used to steer Britain's economy through the coronavirus crisis.

"They are part of our toolbox," Bailey said. "But at the moment we do not have a plan to use them."

The minutes of the committee’s meeting showed that policymakers were particularly concerned that the rise in unemployment during the pandemic could prove to be more persistent than expected. The bank forecast that the unemployment rate would rise to 7.5% this year, from 3.75% in 2019.

He also said the central bank's unemployment projection was a "very bad story" but was expected to fall back over time and inflation was likely to rise back to the BoE's target.

"So you can draw a conclusion from that about where policy is headed," he said.

However, Bailey warned that the British economy faced big challenges ahead and the BoE was ready to provide more stimulus if needed.

"There are some very hard yards, to borrow a rugby phrase, to come. And frankly, we are ready to act, should that be needed."

He also said the possibility of Britain failing to strike a trade deal with the European Union by the end of this year was in part of the downside risks that the BoE saw for the economy, but the COVID-19 pandemic was the biggest challenge.

Although Britain left the bloc in January and transition arrangements end in December with no new U.K.-EU trade deal yet in place, the bank’s report said: “Most risks to U.K. financial stability that could arise from disruption to cross-border financial services have been mitigated.”

This was the case "even if the current transition period ends without the U.K. and EU agreeing on specific arrangements for financial services," it added.

The figures are more optimistic than their predictions issued in May for a 14% drop in the economy this year.

“That partly reflects lockdown measures being eased earlier than had been assumed. It also reflects activity having been stronger than assumed under lockdown, partly due to greater online spending,” the bank said.

Policymakers also said they were concerned the recovery may slow if uncertainty over the pandemic leads some households and businesses to hold off on spending.

“The committee will continue to monitor the situation closely and stands ready to adjust monetary policy accordingly to meet its remit," the MPC said.