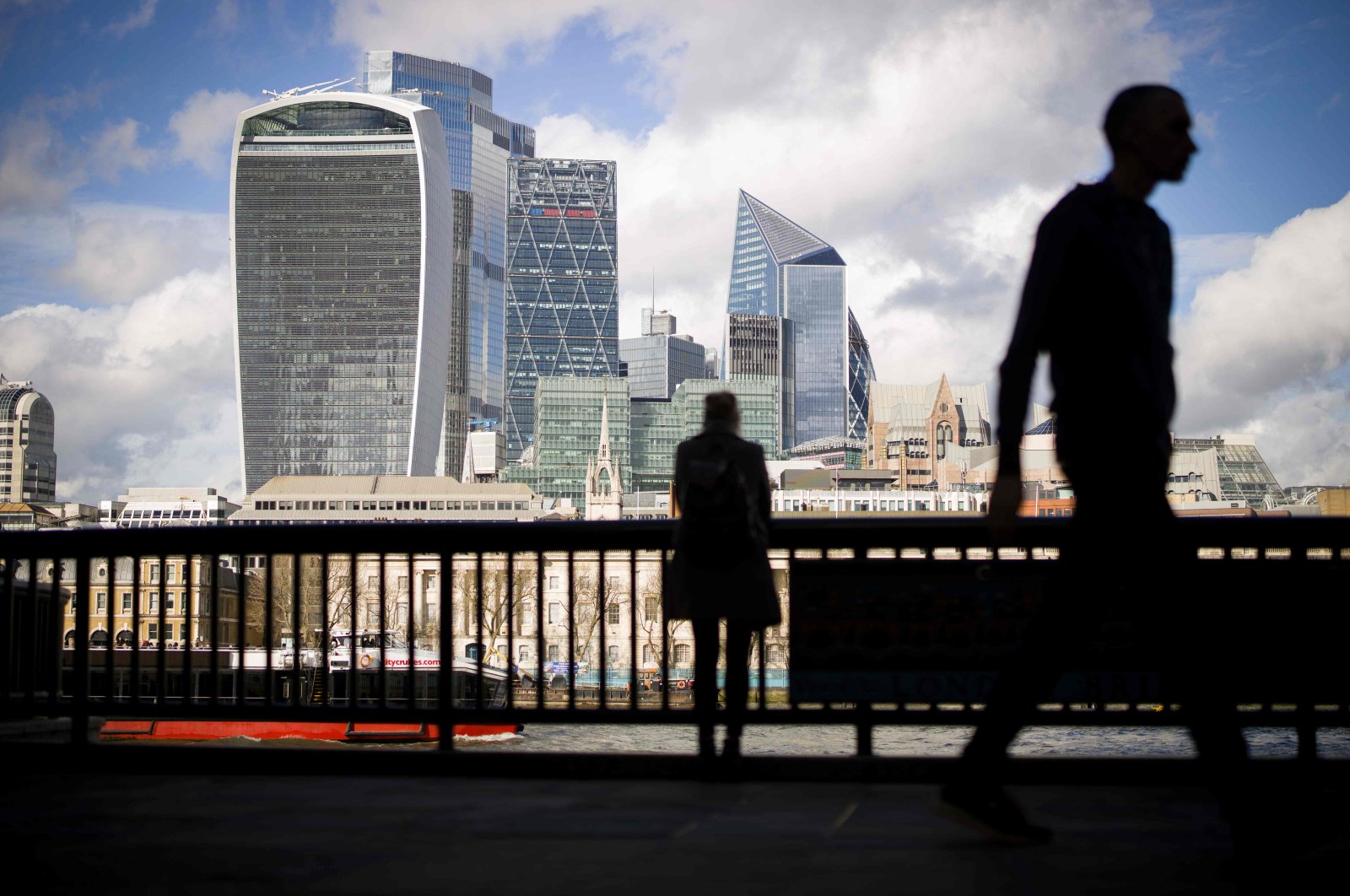 Pedestrians walk by with the towers of the City of London in the background in London, March 11, 2020. (AFP Photo)
by Compiled from Wire Services May 07, 2020 1:16 pm
RECOMMENDED

The Bank of England (BoE) said Britain could be headed for its biggest economic slump in over 300 years due to the coronavirus lockdown and kept the door open on Thursday for further stimulus.

In what it called an "illustrative scenario" rather than a standard forecast, the BoE said Britain's economy was on course to shrink by 25% in the three months to June and for unemployment to jump to more than 9% of the workforce.

Over 2020 as a whole, output was at risk of shrinking by 14% – an annual decline last seen in the early 1700s when Britain was beset by natural disaster and war – despite what the BoE described as "very significant monetary and fiscal stimulus."

The central bank's scenario did, however, foresee the economy bouncing back sharply in 2021 with growth of 15% as lockdown restrictions were loosened.

The gloomy scenario outlined, which is similar to the slumps being predicted elsewhere, came as the bank's Monetary Policy Committee decided to keep its main interest rate unchanged at the record low of 0.1% and opted against a further expansion of its bond-buying program. Two of the nine policymakers wanted to increase the bank’s stimulus program by another 100 billion pounds ($124 billion).

The bank's policymaking panel has previously announced big cuts in interest rates, an expansion in its stimulus program and a sizeable lending program as it tries to contain the economic damage of the pandemic and the associated restrictions put in place by the government.

In a statement accompanying its policy decisions, the bank said the United Kingdom gross domestic product (GDP) is set for a “very sharp fall” in the first half of the year and there will be a “substantial increase” in unemployment beyond those workers who have been retained by their companies as part of the government's Job Retention Scheme.

Its assumptions are based on the phasing out of both the furlough scheme and social distancing guidelines between June and the end of the year. There is also no factoring in of a second wave of infections.

The bank said that the timeliest indicators of U.K. demand have generally stabilized at very low levels in recent weeks, after unprecedented falls during late March and early April. And payments data point to a reduction in the level of household consumption of around 30%.

It also said that consumer confidence has declined markedly and housing market activity has practically ceased. Companies’ sales are expected to be around 45% lower than normal in the second quarter of the year, with business investment 50% lower.

Over the long term, the bank thinks that the British economy could revive quickly if the pandemic, both here and abroad, is dealt with. It thinks that the economy could be back where it was before the outbreak within three years, with the financial sector helping the corporate sector get through the strain.

The BoE said inflation was likely to fall below 1% in the next few months, half the BoE's target, but that recent figures suggested demand had stabilized, albeit at very low levels.

Minutes of this week's discussions at the BoE showed policymakers thought there were risks that the illustrative scenario could prove too optimistic because people might remain cautious about resuming their normal lives after the lockdown.

The scenario did not cover the risk of a return of the coronavirus causing a second spike in infections and renewed lockdown.

"The financial system was, however, in a much better position to support households and businesses through this period compared with the global financial crisis," the minutes said.

A separate BoE report on Thursday said an emergency test of the financial system's resilience showed that top banks and building societies could keep lending – and also should do so to avoid an even deeper downturn.