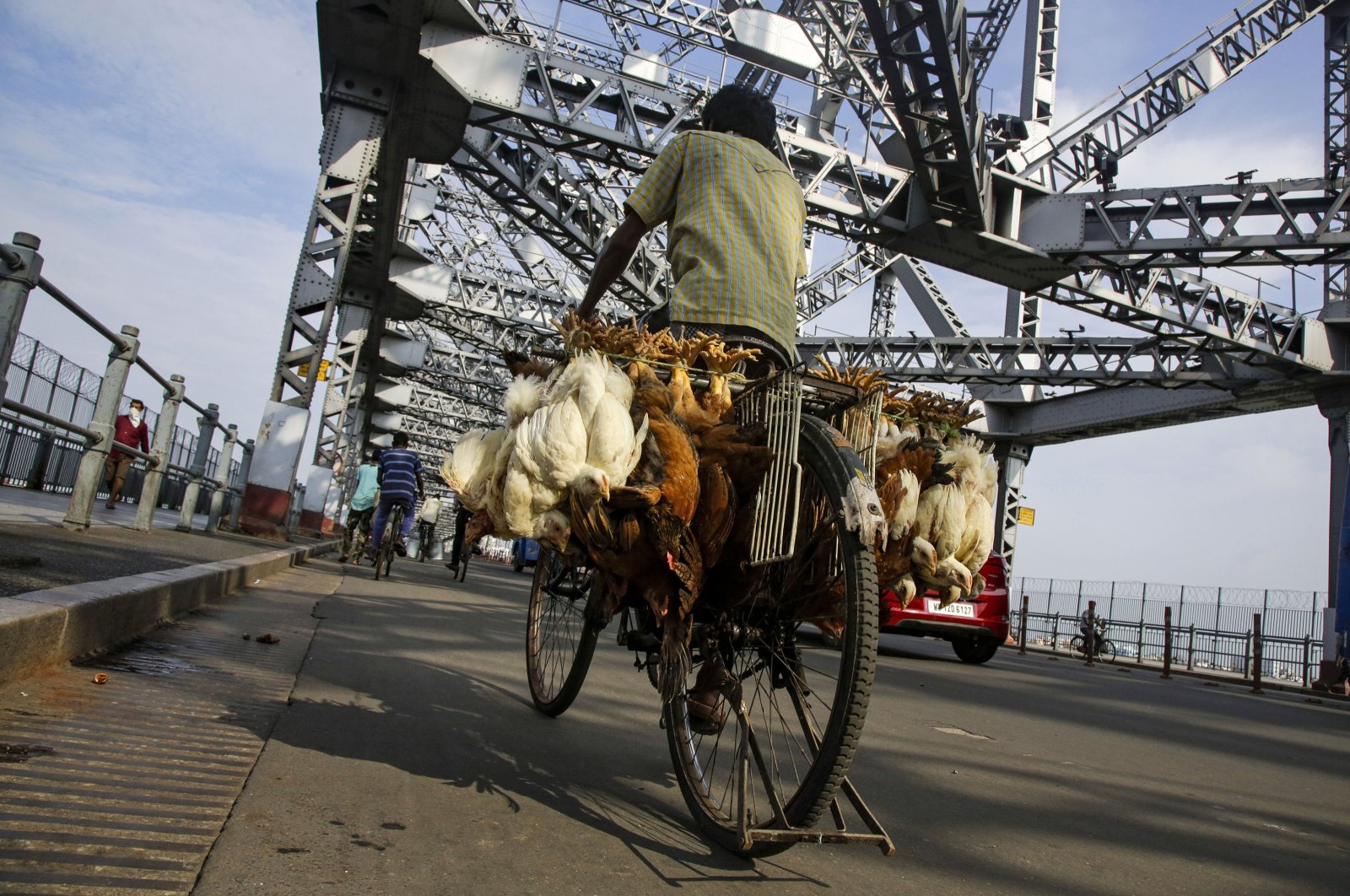 A vendor carries chickens for sale and rides past the landmark Howrah Bridge in Kolkata, in the state of West Bengal, eastern India, June 3, 2020. (AP Photo)
by Anadolu Agency Jan 09, 2021 1:49 pm
RECOMMENDED

With an outbreak of avian influenza, commonly known as bird flu, in several parts of India, the country's poultry industry is in for a bumpy ride.

The South Asian country has started culling thousands of birds after reports that the disease has been detected in ducks, crows and wild geese in several parts of the country.

Poultry industry farmers are worried about the industry's future as people in several parts of the country have started avoiding chicken meat and eggs, fearing it may contain the virus.

Sudhir Kumar Aggarwal from the northern Haryana Poultry Association said that prices of poultry products have dropped by up to 15% because of outbreak reports.

"Such news in media bring worries to the industry,” he told Anadolu Agency.

"Because of a lack of awareness, people stop buying eggs and chickens. Due to less consumption, the prices have started to fall.”

Northern Haryana state has recorded nearly 400,000 poultry deaths in the district of Panchkula, all of which are suspected to be caused by the flu, officials said. On Friday, officials confirmed the H5N8 strain in poultry samples.

Aggarwal said that recently thousands of chickens died in the Barwala belt in the state, where 117 poultry farms are located.

"During winters, the problem (of poultry dying) aggravates ... the cause of deaths in large numbers is not known yet,” he said. "We are taking all precautions."

On Thursday, Jammu and Kashmir announced a ban on the import of poultry until Jan. 14. The Madhya Pradesh government permitted officers concerned to impose a temporary ban on trading with poultry companies based in South Indian states, in case the need arises.

Praveen Garg, a senior functionary of the Punjab Poultry Association, said: "The industry suffered heavily during the COVID-19 (pandemic) because of false rumors. Now if it (the pandemic) continues for a long time, it will bring more problems for the sector because people link it with eggs and chickens. It happens every time.”

Speaking to Anadolu Agency, he said the industry lost millions of rupees last year after people started linking chicken meat and eggs with the transmission of COVID-19 among humans.

India is one of the world's largest producers of eggs and chicken meat.

6 states in grip of flu

According to officials, the flu has been reported in six states. "The disease has been confirmed in six states – Kerala, Rajasthan, Madhya Pradesh, Himachal Pradesh, Haryana and Gujarat. It is learnt that culling operations have been completed in both the affected districts of Kerala,” a statement by the Ministry of Fisheries, Animal Husbandry and Dairying said Friday.

It said teams have been deployed to visit the affected states of Kerala, Haryana and Himachal Pradesh for monitoring and epidemiological investigation.

In Rajasthan and Madhya Pradesh states, there are reports of crow deaths. Officials say many migratory birds have died in Himachal Pradesh state. In Southern Kerala, ducks have also died.

The statement said: "States have been requested to increase awareness regarding safety of poultry or poultry products that were safe for consumption following boiling/cooking procedures for which central (government) support would be available.”

According to experts in India, migratory birds could be the possible cause of the avian flu, an illness that usually affects only birds.

"The migratory birds which come to our country may be the carriers of the disease. Right now, we are seeing precautionary measures by the government but the disease has started affecting the poultry industry,” wildlife biologist Sumit Dookia told Anadolu Agency.

K.S. Gopi Sundar, a scientist at the Nature Conservation Foundation, said that while the situation is relatively calm at the moment, the bad sign is that the bird deaths are being reported from multiple parts of the country.

"Right now, it seems to be under control in a sense that the disease is getting reported and the government is taking action,” he said.

Health experts said those involved in the poultry industry need to be careful.

"People handling or culling the birds should be extra careful and take precautions by using PPE (personal protective equipment),” Shobha Broor, former head of the department of microbiology at Delhi's All India Institute of Medical Sciences, told Anadolu Agency.

She said that although humans catching bird flu is rare, those coming in contact with infected birds, either alive or dead, could contract it.