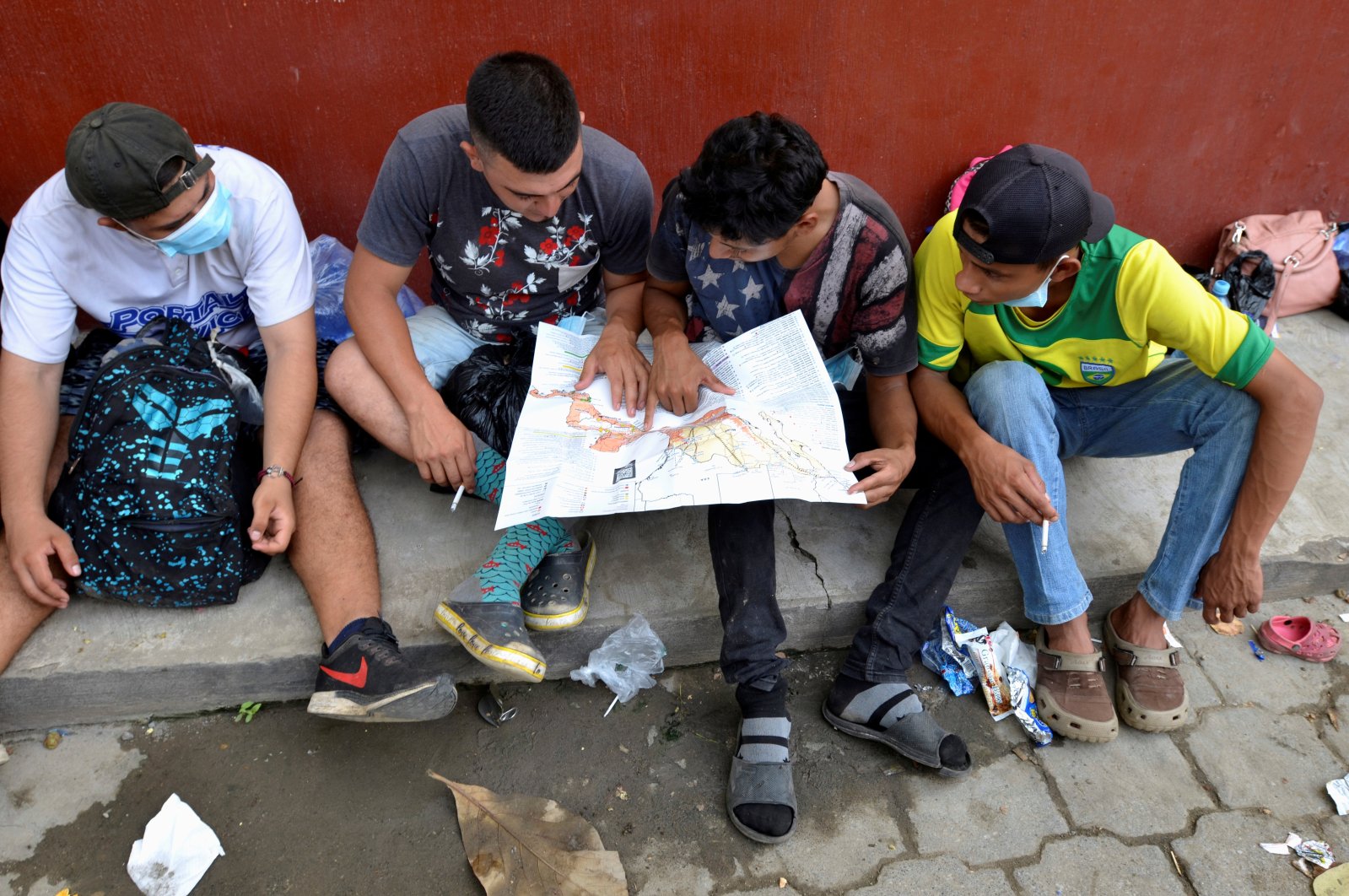 A group of Honduran migrants who are trying to reach the U.S., look at a Central America and Mexico map outside a migrant shelter as they wait to move toward the Guatemala and Mexico border, in Tecun Uman, Guatemala, Oct. 3, 2020. (Reuters Photo)
by REUTERS Oct 15, 2020 3:26 pm

Only weeks before the U.S. presidential election, Central America’s complex migration machinery is reactivating, as the collapse of the region’s economies pushes families deeper into poverty

After losing her job in Honduras, Gabriela Alvarado has spent the last six weeks crisscrossing toward the U.S. border, part of a small but growing movement of Central Americans heading north after the coronavirus ravaged the already poor region.

Alvarado and her husband, Jose, decided their only option was to leave their two children with relatives and try to reach the United States, after a fruitless hunt for work at home.

"I went searching but there's nothing, everything is shut down," the 24-year-old former factory worker said on Tuesday from the northern Mexican border state of Sonora. "There's no employment."

Earlier this year, U.S.-bound migration plummeted as Central American and Caribbean countries imposed strict restrictions on movement in response to the growing coronavirus pandemic, and the United States implemented a new program of rapidly expelling people caught crossing the border without authorization.

The historic lockdowns threw the region's well-trodden migration routes into such chaos that some "coyotes" – human smugglers – reversed course and began trafficking stranded Central Americans south to their home countries.

Now, only weeks before the U.S. presidential election, the region's complex migration machinery is reactivating, smugglers, experts and migrants say, as the collapse of Central America's economies pushes families deeper into poverty, creating what could become a lightning rod political issue for the next U.S. administration.

U.S. Border Patrol conducted nearly 55,000 expulsions or apprehensions of migrants at the southwest border in September, according to new data from U.S. Customs and Border Protection (CBP), a 238% increase from April.

Around two-thirds were Mexican nationals, a DHS spokesman told Reuters, while Honduras, Guatemala and El Salvador were the next three largest countries of origin.

Early data for October shows the upward trend continuing, one U.S. source with knowledge of the numbers said.

The data points to a rebound in traffic, although the U.S. Customs and Border Protection (CBP) said more than a third of the people expelled under the new U.S. program had been caught more than once.

Back in February, a human trafficker known as Chicote, who oversees a network of coyotes, took his last trip to the U.S. border, nervously eyeing migrants who coughed or sneezed while packed into the crowded safe houses the network uses to move people while evading authorities.

By March, as the coronavirus swept across the region, members of the Gulf Cartel in northeastern Mexico told him to suspend operations. Chicote said he works with the drug traffickers to help migrants cross the Mexican border state of Tamaulipas into Texas.

Then, in July, a Gulf Cartel operative looking for ways to boost the gang's income asked Chicote to restart.

At first, still concerned about the pandemic, Chicote declined. But now, after a seven-month hiatus, he says he's back in business, with a twist. He now insists both smugglers and migrants use masks and plenty of anti-bacterial gel.

"Everything is opening back up," he said.

"People don't have money and they have debt – and the easiest way for them to make money is to get to the United States," Chicote said, explaining that his clients' family members in the U.S. foot the trip's $12,000-a-head price tag.

Chicote asked not to be identified by his real name for fear of retribution.

In Honduras, the central bank expects the economy to contract between 7% and 8% this year due to pandemic-related restrictions, marking the worst financial collapse in the country's history.

"With the economic contraction, poverty is becoming more profound."

The controls on movement across the region, shrinking resources available to many potential migrants, and lingering fears of the pandemic still raging in Mexico and the U.S. have so far kept a lid on migration.

But in a sign that pressure is building, thousands of adults, children, and elderly people joined a hastily organized and largely unsuccessful caravan that departed from Honduras two weeks ago, many grabbing their bags and leaving just days after learning on social media of the caravan's planned departure.

"Every day the situation grows worse here," said 21-year-old Enoc de Jesus Ramirez, who said he joined the caravan after he lost his job at a gas station and his girlfriend was laid off from the factory where she worked.

After the group initially overwhelmed Guatemalan border security, the Guatemalan government gave special powers to the army to round up and deport more than 3,000 of the migrants back to Honduras, including Ramirez.

While such large groups garner attention in Washington, the majority of Central Americans who migrate without authorization do so either alone or through smuggling networks, largely out of sight.

In Guatemala, a low-level smuggler named Pablo, who asked not to use his full name, told Reuters that when trafficking ground to a halt in the spring he rode out his unemployment at a barbershop, charging $1.30 per cut.

But in recent weeks he has resumed transporting people across the border into Mexico, he said. From there, other members of the smuggling network will help migrants continue their journey northwest, often working with the Sinaloa Cartel to cross the Sonoran desert.

"We use scouts who search out Border Patrol," he explained. "For every 10 people, usually six get through (the border)."

Others, like Alvarado and her husband, make the dangerous trek up through Sonora alone, without the expensive services of smugglers. Some will then contract a trafficker to help them with the tricky final leg of the journey.

Victor Clark, director of the Binational Center for Human Rights in Tijuana and an expert in migration, said the pandemic has forced some smugglers to drop the price of crossing the desert into the U.S. to as low as $5,000, from $8,000.

"Central Americans are worn out (economically), and their families in the United States are also absorbing the costs of the pandemic," he said.

Meanwhile, in the southeastern Mexican state of Veracruz, a few dozen members of the caravan who were able to evade the Guatemalan soldiers and Mexican border officials waited on Tuesday afternoon by the train tracks, aiming to catch a ride further into Mexico.

"The people are going hungry in Honduras," said Marcos, who didn't give his last name. "So I left to see if I can survive in another country."