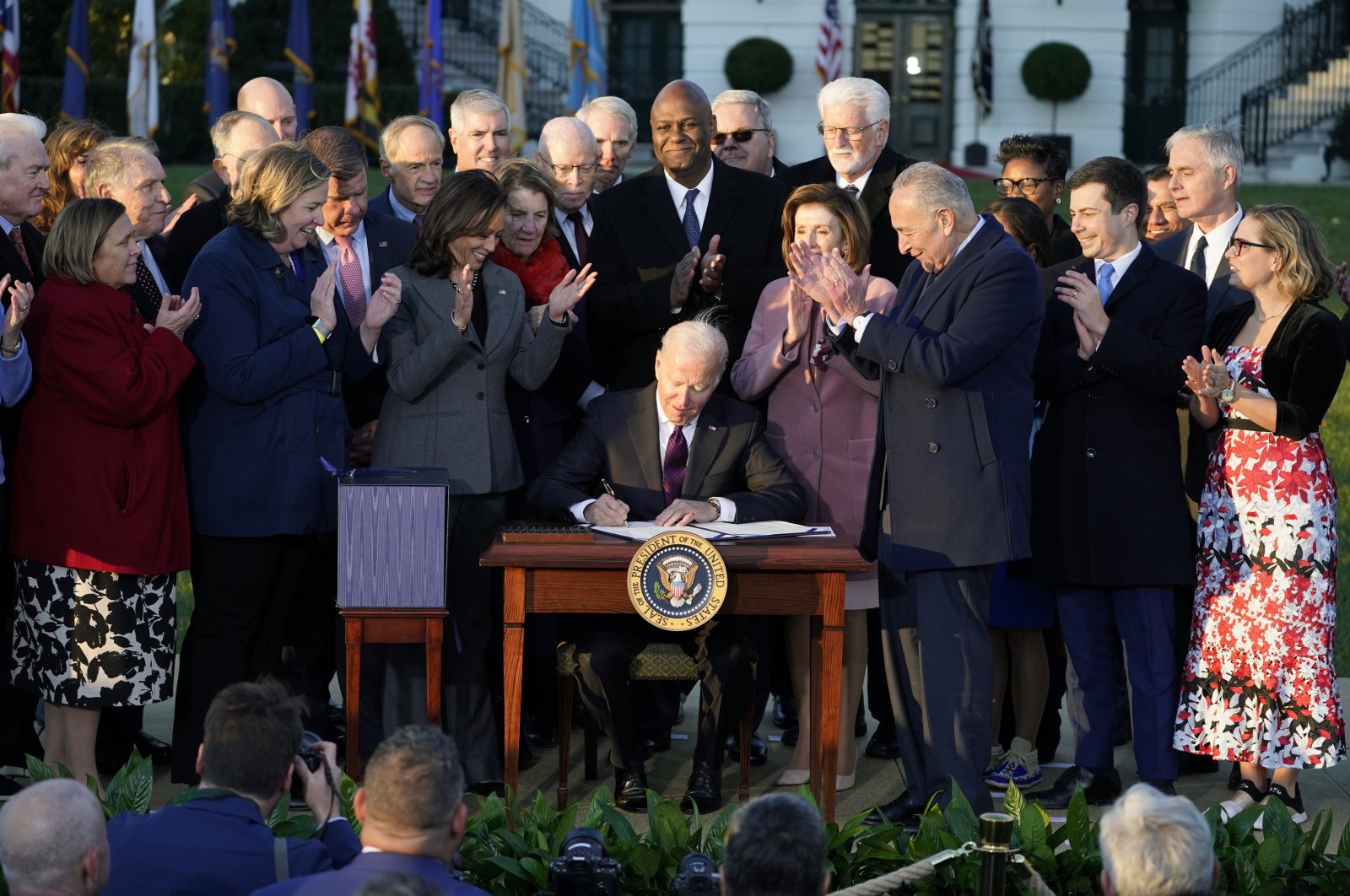 U.S. President Joe Biden on Monday signed his $1 trillion infrastructure deal into law on the White House lawn, hailing it as an example of what bipartisanship can achieve.

Biden hopes to use the law to build back his popularity and says it will deliver jobs, clean water, high-speed internet and a clean energy future.

Support for Biden has taken a hit amid rising inflation and the inability to fully shake the public health and economic risks from COVID-19.

A smattering of Republican lawmakers were on hand for what might be one of the last celebratory displays of bipartisanship ahead of the 2022 midterm elections.

“My message to the American people is this: America is moving again and your life is going to change for the better,” Biden said.

The measure is designed to create jobs across the country by dispersing billions of dollars to state and local governments to fix crumbling bridges and roads, and expanding broadband internet access to millions of Americans.

The bill-signing ceremony, held in chilly weather on the White House South Lawn to accommodate a big crowd, was an increasingly rare moment when members of both parties were willing to stand together and celebrate a bipartisan achievement.

Biden, whose job approval ratings have dropped because of his handling of the economy and other issues, heard supportive chants of "Joe, Joe, Joe" from some in the crowd and got a standing ovation as he stepped to the microphone.

Biden said the bill's passage showed that "despite the cynics, Democrats and Republicans can come together and deliver results." He called the bill a "blue-collar blueprint to rebuild America."

"Too often in Washington, the reason we don’t get things done is because we insist on getting everything we want. With this law, we focused on getting things done," Biden said.

Speakers included Senator Kyrsten Sinema, the centrist Arizona Democrat whose opposition to some tax increases has forced a scaling back of a companion piece of legislation, Biden's $1.75 trillion "Build Back Better" social safety net plan.

Sinema and fellow Democratic Senator Joe Manchin of West Virginia, who also attended, have angered some in their party for resisting a number of items sought by progressives in the social spending bill. Sinema appeared to refer to the criticism in her remarks.

"Delivering this legislation for the American people – this is what it looks like when elected leaders set aside differences, shut out the noise and focus on delivering results on the issues that matter most to everyday Americans," she said.

Some Republicans who drew fire from their party's right wing for backing the legislation stayed away.

Biden signed an executive order before the ceremony directing that materials made in the United States be given priority in infrastructure projects, the White House said.

It also established a task force made up of top Cabinet officials to guide implementation of the legislation, co-chaired by former New Orleans Mayor Mitch Landrieu.

The bill had become a partisan lightning rod, with Republicans complaining that Democrats who control the House of Representatives delayed its passage to ensure party support for Biden's $1.75 trillion social policy and climate change legislation, which Republicans reject.

There was a festive atmosphere at the ceremony. Biden joked that Portman, who is not standing for reelection and does not have to face critics within his own Republican Party, is a "hell of a good guy. I know I’m not hurting you, Rob, because you’re not running again.”

Representative Don Young, an 88-year-old Alaska Republican, teased Biden about the hour-plus length of the ceremony when he sat down to sign the bill.

"We were wondering when you were gonna stop. We damn near froze to death," he said.

How long the bipartisan spirit will last is unclear as both sides expect a big battle over the social safety net plan.

The White House is hoping House Speaker Nancy Pelosi will bring the bill to a vote this week. That will only be the first step, however, as the Senate has not yet taken up the legislation, and Democratic divisions could threaten its chances in that chamber.

Biden and top officials in his administration will go outside Washington to sell the plan more broadly in the coming days.