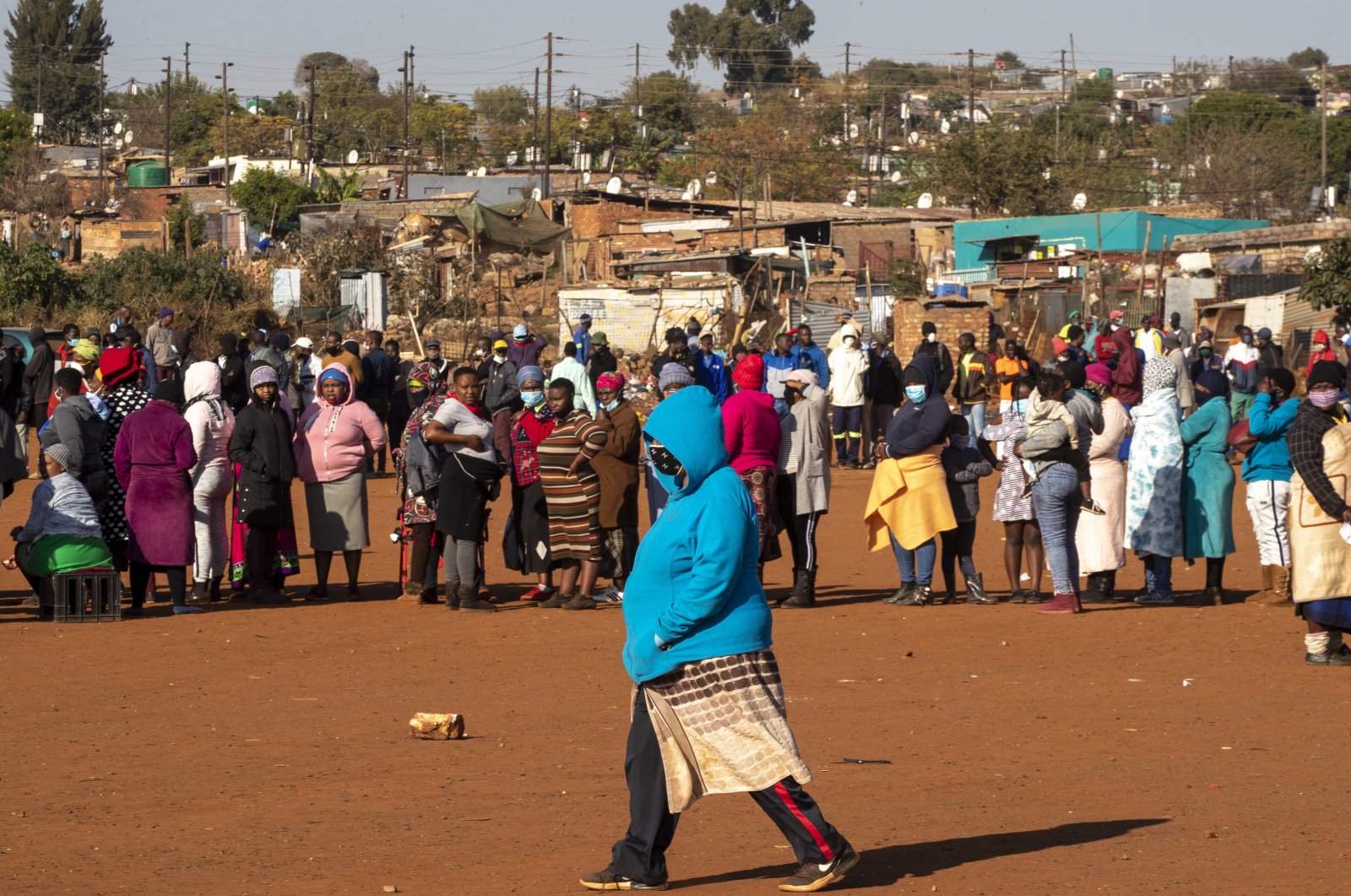 A woman walks across a dusty soccer field as people affected by the coronavirus economic downturn line up to receive food donations at the Iterileng informal settlement near Laudium, southwest of Pretoria, South Africa, May 20, 2020. (AP Photo)
by Anadolu Agency Jun 11, 2021 10:20 am
RECOMMENDED

Coronavirus restrictions have had an overwhelming effect on African countries, and in Kenya, more than 1.7 million people lost their jobs in the first three months of the pandemic, the Kenya National Bureau of Statistics announced.

Thousands of parents were laid off across the continent pushing many families into extreme poverty.

With schools closed most of the time over the past two years due to COVID-19 related restrictions, Koech Kipsiele, 13, was forced to work to help the family bring food to the table.

On the eve of World Day Against Child Labor on Saturday, Kipsiele told Anadolu Agency (AA) that he has to work on a farm full time as his parents have gone into debt due to pandemic restrictions.

"I have to help on the farm, even if I didn't want to, there is nothing to do apart from play and help the family, to collect tea ... and also look after the plants," he said.

Every day after a bowl of porridge in the morning, Kipsiele works on farms under a scorching sun until lunch, after which he has a few hours of play with his friends. He then returns to do the rest of the farm work.

He has continued his routine even after schools reopened in the country.

In the maize farms spread across western Kenya, it is common to see children working in the hot sun. In the semi-arid lands of northern Kenya, children have been seen grazing cattle and other livestock, instead of going to school.

In Machakos County, children like Nduku Kiloko, 12, join their families to work in stone quarries, dealing with explosives instead of shouldering a school bag.

"We work all day, we don't play. Yes we can go to play if we wanted to but then we would not have anything to eat. We have to help the family," she said.

Despite a ban on employing children, her mother Anne Ndunge said she needs children to help feed the family.

"I used to work as a house help. My boss, who was working with a nongovernmental organization (NGO), lost the job and left the country. That means we needed more hands to work to feed our family. Everyone in the village does this; it is no secret," she said.

On the streets of the Kenyan capital Nairobi, an unmissable sight is that of female street beggars with children. The women do not do anything but wait for the children to beg on their behalf.

Numerous organizations have reported on increases in child labor after the pandemic outbreak.

According to research conducted by the African Network for the Prevention and Protection against Child Abuse and Neglect (ANPPCAN) in four counties in Kenya, many children were affected by school closures because the majority of the parents were either self-employed in the informal sector or small-time farmers generating minimal incomes.

Speaking to AA, the national project coordinator at the International Labour Organization (ILO) in Kenya, Faith Manyalla, said her organization set 2021 as the goal for the elimination of child labor after a unanimously adopted resolution at the United Nations General Assembly.

"This year requires accelerated response by a range of stakeholders ranging from the government to the private sector, NGOs, and all the U.N. bodies to accelerate action toward the elimination of child labor," she added.

According to a report by ANPPCAN, most of the respondents said that during COVID-19, they needed food, shelter, clothing, education and support more than masks, soap or sanitizers.