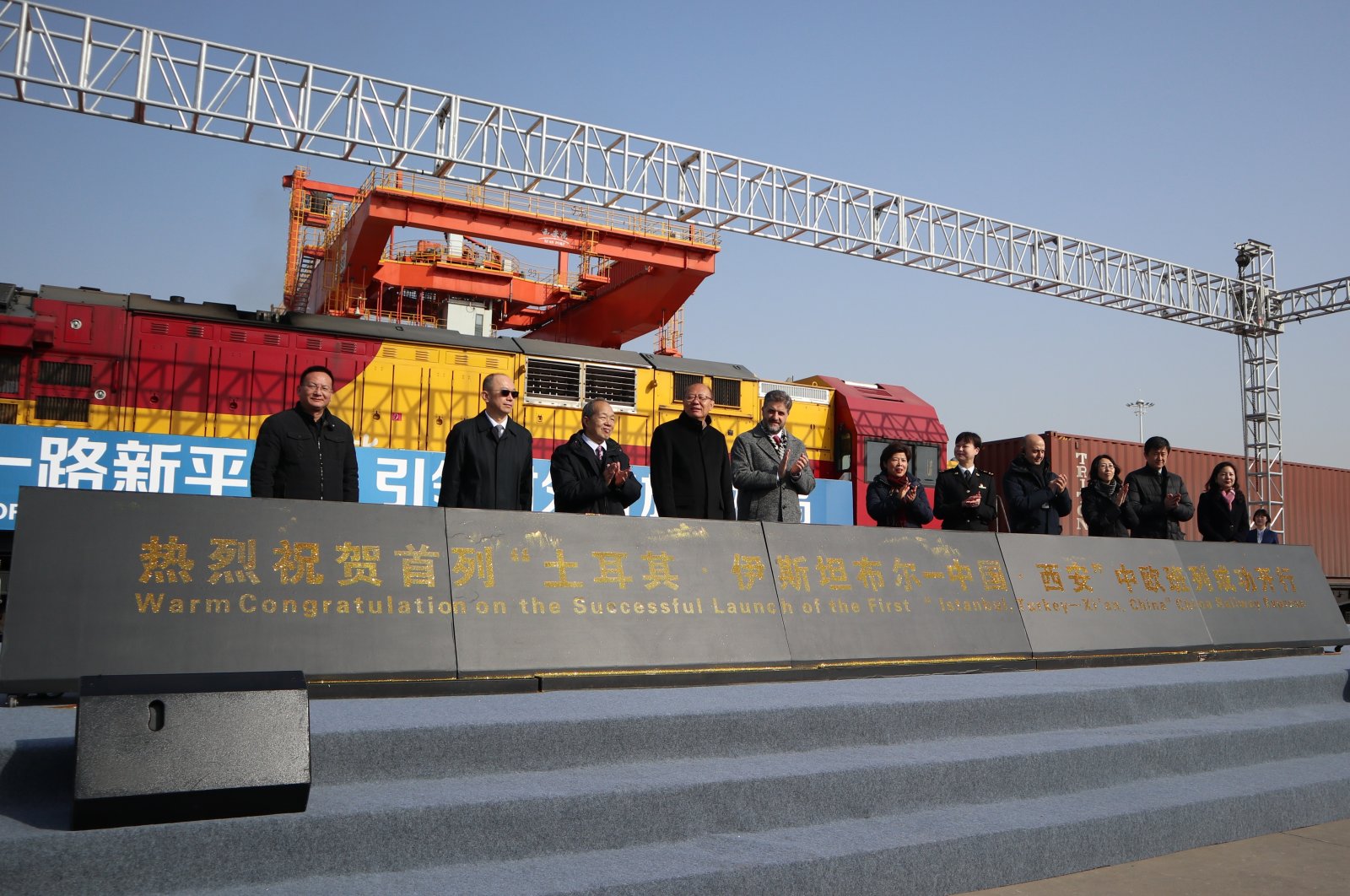 Turkish and Chinese officials on stage during the welcoming ceremony for the first Turkish freight train to arrive in Xi’an, the capital city of Shaanxi province in central China, Dec. 23, 2020. (IHA Photo)
by DAILY SABAH Dec 23, 2020 2:12 pm
RECOMMENDED

Turkish and Chinese officials on Wednesday said that the bilateral exchange of goods and regional economic cooperation will grow in the coming period after the first freight train carrying goods from Turkey to China completed its historic trip.

The remarks came on the sidelines of a welcoming ceremony for the train that departed Istanbul on Dec. 4 and arrived in Xi’an, the capital city of Shaanxi province in central China, on Saturday.

“We are happy and proud that Turkish goods have reached China, one of the largest markets in the world, in 13 days by railway, following the trail of the historical Silk Road,” said Trade Minister Rushar Pekcan, attending the ceremony via video link.

“These trips will increase and continue regularly. And we will make every necessary contribution to this,” Pekcan noted.

“This historical journey has gone down in history as a success of Turkey and our exporters and has been an important milestone in our country’s export adventure.”

Also attending the ceremony, Transport and Infrastructure Minister Adil Karaismailoğlu said the export train proved to the world that a new era in rail freight transportation between Europe and Asia has begun, expressing hopes it would be a “strong breath for our new achievements.”

“New ones will be added to these achievements exponentially with mutual trips twice a week between the two countries in 2021,” Karaismailoğlu noted.

The fact that the first export train successfully completed its journey to China “has been the biggest proof that a big dream is now a reality,” the minister stressed.

Pekcan added that the train would contribute to a sustainable and balanced development of Turkey-China relations in the coming period.

The first train covered 8,693 kilometers (5,402 miles) as it passed through two continents, two seas and five countries. It traveled across Georgia, Azerbaijan, the Caspian Sea and Kazakhstan to reach Xi’an.

Carrying 1,400 fridges in 42 containers, on Wednesday it passed through the eastern Kars province before it crossed Turkey's border at the Akhalkalaki Station in Georgia.

Pekcan said the export train constituted a beautiful start of railway transport from Turkey to the Far East.

“Together, we are witnessing the revival of the Middle Corridor with rail transport, which we believe will contribute to the enrichment of European and Asian trade with mutual shipments,” the minister said.

“I hope that this and our trips that will continue after this will contribute to our country’s exports, as well as to mutual trade between Turkey and China and even global trade.”

Both Pekcan and Karaismailoğlu particularly stressed the importance of the Baku-Tbilisi-Kars railway providing the shortest rail link between Europe and Asia.

The line was established in cooperation between Turkey, Azerbaijan and Georgia within the scope of the Belt and Road Initiative (BRI), which aims to connect Asia, Africa and Europe via roads and sea lanes.

It provides freight and passenger links between Europe and China. It was launched in October 2017.

The line reduces the freight transportation time between China and Turkey from one month to 12 days, while the whole route between the Far East and Western Europe takes 18 days with the integration of the Marmaray tunnel, Karaismailoğlu explained.

Dubbing it a critical transit point, Pekcan said the effective use of the BTK railway line, and therefore the Middle Corridor would bring success with increased cooperation of all relevant stakeholder countries and smoother and more frequent use of the Caspian passes.

“The fact that all relevant countries work together to make the Middle Corridor more usable will contribute significantly to sustainable growth in the region,” the minister said.

In November 2019, Turkey and the world witnessed a historic moment after Ankara welcomed and sent off the first train that departed from China to Europe while passing under the Bosporus via the Marmaray tunnel, marking the realization of the “Silk Railway” dream.

The original Silk Road was an active trade route used between the second century B.C. and the 18th century A.C. that connected China and Europe through Anatolia and the Mediterranean region.

Pekcan emphasized that Turkey remains strategically important in terms of logistics and transportation due to the fact that it is a bridge between Asia and Europe.

In this context, she said they see the BRI project as one of the most important for turning Turkey’s theoretical advantages and privileges into practical benefits.

Pekcan further stressed that the Asian investment and Infrastructure Bank, where Turkey is among the founding members, offers strategic opportunities within the framework of the Belt and Road Initiative.

“For this reason, we want Turkish companies to participate effectively in projects that will be realized with the financing of the Asian investment and Infrastructure Bank,” she said.

“We are building a modern Silk Road with the facilities provided by technology and modernization,” Önen stressed.

The ambassador emphasized it would not be wrong to say that this occasion is a sign of the revival of historical ties between Turkey and China.

“The eastern point of the Silk Road and the ancient capital of China, Xi’an, was once the meeting point for social and commercial interactions of ancient Turks and Chinese, and many others,” he said.

“Our ancestors were aware of the importance of safe and stable transportation routes to improve economic activity. They, therefore, created a ‘road’ between Asia and Europe that allowed goods to be transported. Today, centuries later, we are following their path again.”

As a matter of fact, Önen stressed that the start of direct flights between Xi’an and Istanbul in December 2019 was also very useful for this connection.

“We hope that these flights will start again when the pandemic is over,” he noted.

Further use of the railway link between Turkey and China will accelerate economic activity in Eurasia, the ambassador suggested.

“Since Turkish and Chinese products will be easier to deliver with these freight trains, it will also be useful for our bilateral economic relations. High-quality Turkish brands and products sought in many parts of the world will become more available in the Chinese market,” he noted.

Önen informed that the bilateral trade volume between Turkey and China hit almost $22 billion in 2019, up from just $1 billion some 20 years ago.