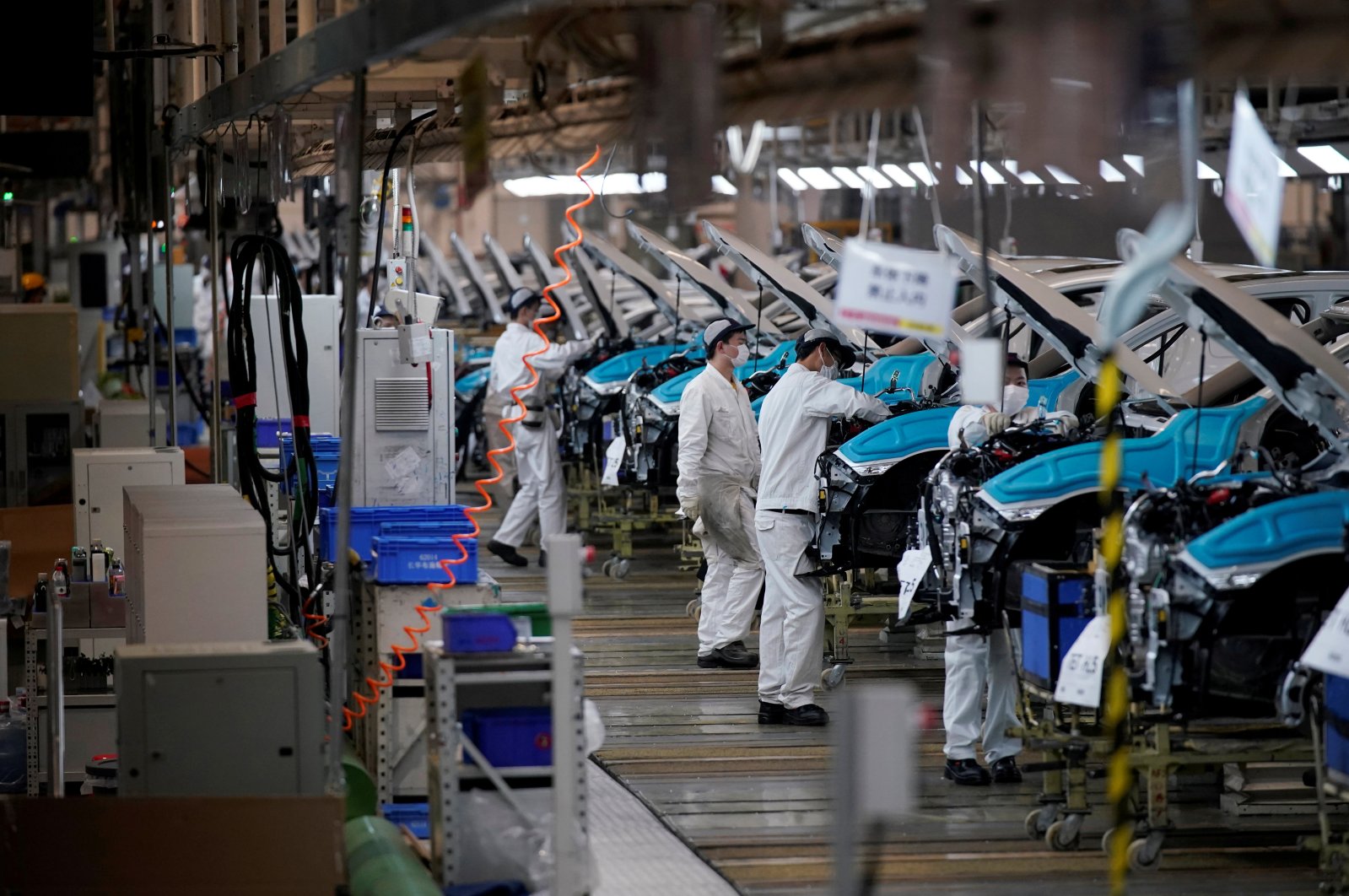 Employees work on a production line inside a Dongfeng Honda factory after lockdown measures in Wuhan, the capital of Hubei province and China's epicenter of the coronavirus outbreak, were further eased, April 8, 2020. (Reuters Photo)
by REUTERS Jun 15, 2020 2:20 pm
RECOMMENDED

China's factories stepped up production for a second straight month in May, as the country shook off the economic torpor of the coronavirus, although the weaker-than-expected gain suggested the recovery remained fragile.

Patchy data on Monday also showed sustained contractions in retail sales and investment, a sign many sectors were still struggling with the effects of heavy shutdowns across the world's second-largest economy earlier this year.

Global leaders are closely watching China to see how long it takes to get back on its feet as they begin to relax their own stringent anti-virus measures and reboot their economies.

Analysts say signs of improvement continue to be seen in China from increased steel production and car sales to more industrial parks restarting. However, concerns about a second wave of infections are now casting a dark cloud over recovery prospects.

"Industrial production is on the whole getting better, but there are still quite a few difficulties and uncertainties," said Jiang Yuan, an official at the National Bureau of Statistics (NBS), in a statement.

Industrial output growth quickened to 4.4% in May from a year earlier, the highest reading since December, official data showed on Monday. Analysts polled by Reuters had expected a 5% rise from 3.9% in April, the first expansion since the virus emerged in China late last year.

But a collapse in export orders amid global lockdowns has left factories more reliant on domestic demand, which is recovering at a more sluggish pace.

Retail sales fell for a fourth straight month. While the 2.8% drop was smaller than the 7.5% slump in April, it was larger than the 2% fall tipped by analysts. Heavy job losses and fears of a second infection wave have kept consumers cautious.

"There are still restrictions in some demand areas, people remain worried and not many are traveling or going to cinemas, plus there are some virus flare-ups, which will have some impact on consumption," said Tang Jianwei, senior economist at Bank of Communications in Shanghai.

Fixed asset investment fell 6.3% in January-May from the same period last year, compared with a forecast 5.9% fall and a 10.3% decline in the first four months of the year.

As in past downturns, Beijing is banking on higher infrastructure spending to lead a recovery, and steel mills have cranked up furnaces to over 92% of capacity.

Private-sector fixed-asset investment, which accounts for 60% of total investment, fell 9.6% in January-May, compared with a 13.3% decline in the first four months of the year.

Other data showed real estate investment fell 0.3% in January-May from a year earlier, far less than in previous months.

China's gross domestic product (GDP) shrank 6.8% in the first quarter, the first contraction on record. Highlighting the uncertain outlook, the government did not set a GDP growth target at its annual parliament gathering in May, the first time in nearly two decades it has not done so.

The NBS said China's economy has not yet returned to normal and external risks have clearly increased. China would need to see further recovery in June for the economy to eke out an expansion in the current quarter, it added.

Some analysts saw May's factory data pointing to a more optimistic outlook than previously feared. Bank of Communications' Tang now expects China's GDP to return to modest growth in the second quarter, helped by the recovery in property investment.

However, others still see risks as fragile employment weighs on consumption. ING economists maintained their forecasts for GDP to fall 3.1% in the second quarter and 1.5% in 2020.

"We believe that the unstable job market and health care concerns are the main factors slowing down the recovery," said Iris Pang, ING chief economist Greater China. "This means that even during the long holiday month of May, people were still spending carefully."