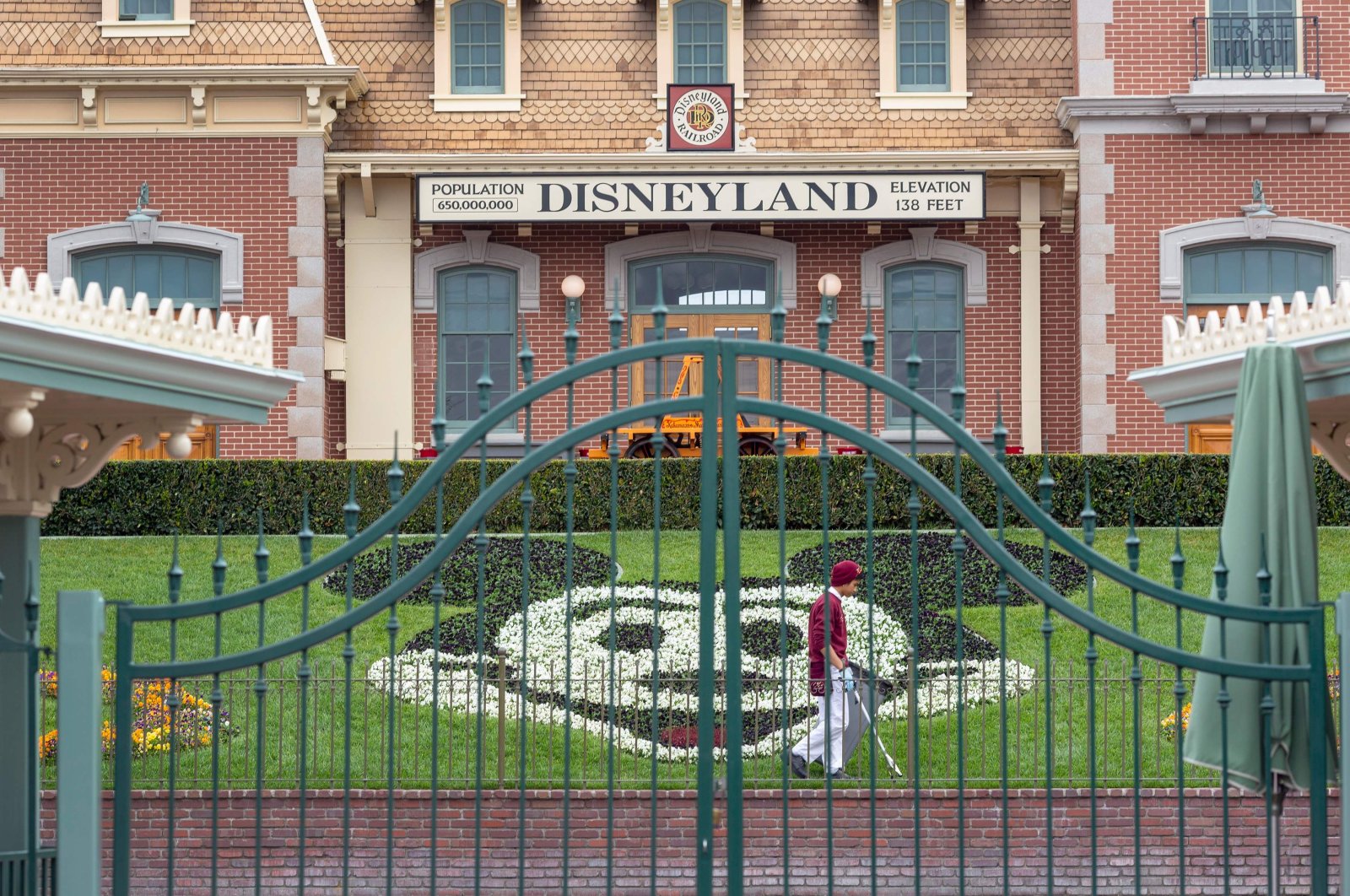 An employee cleans the grounds behind the closed gates of Disneyland Park on the first day of the closure of Disneyland and Disney California Adventure theme parks as fear of the spread of coronavirus continues, in Anaheim, California, March 14, 2020. (AFP Photo)
by French Press Agency - AFP
Sep 30, 2020 11:39 am

Disney said Tuesday it will cut 28,000 jobs from its U.S. theme parks division, singling out California restrictions that have prevented the giant Disneyland resort from reopening due to the coronavirus crisis.

The cuts were needed in light of social distancing requirements and depressed demand caused by the pandemic, along with uncertainty on when the parks will recover, the Mouse House said in a press release.

"(A)s difficult as this decision is today, we believe that the steps we are taking will enable us to emerge a more effective and efficient operation when we return to normal," said Josh D'Amaro, chairperson of Disney Parks, Experiences and Products.

About two-thirds of the affected employees are part-time staff.

Drawing millions of tourists each year, Disneyland in Anaheim near Los Angeles is the world's second-most visited theme park, after the Magic Kingdom at Walt Disney World in Orlando.

Unlike the Disney theme parks in Florida, Tokyo, Hong Kong, Shanghai and Paris, however, the Anaheim resort has so far been unable to reopen due to the Golden State's COVID-19 restrictions.

Uncertainty had been "exacerbated in California by the state's unwillingness to lift restrictions that would allow Disneyland to reopen," D'Amaro said.

Disneyland had originally been scheduled to reopen in July, but that was called off as local officials rolled back reopenings due to another coronavirus surge.

While the rate of new infections has since gone back into decline, and certain businesses are once again allowed to welcome customers back, theme parks remain shuttered in the nation's most populous and richest state.

Last week, D'Amaro called on California Governor Gavin Newsom to "help us reopen" or risk the losses of tens of thousands of jobs.

"The longer we wait, the more devastating the impact will be to the Orange County and Anaheim communities," he said, urging officials "to treat theme parks like you would other sectors."

The state has introduced a four-tier system for counties, with Orange County where Disneyland is based ranked in the second-highest category.

Even the handful of counties with "minimal" coronavirus, however, are not yet permitted to reopen theme parks.

Earlier in the month, Disneyland joined Universal Studios and other theme parks in a statement demanding California officials set out the health criteria required for them to reopen. Local mayors have also spoken out.

Newsom said earlier this month that theme park guidance would be issued "soon."

The move to lay off thousands of workers comes on the heels of Disney's $4.7 billion loss in the most recent quarter, which reflected the hit to its theme park business and the derailment or postponement of major movie releases.

These negative effects have been offset somewhat by soaring demand for the Disney+ streaming service, where it steered premieres of its "Mulan" remake and the film version of Broadway musical "Hamilton."

Last week, however, Disney announced it was postponing several of its biggest theatrical releases until next year, including eagerly anticipated movies from the record-grossing Marvel superhero film series such as "Black Widow" and "Eternals."

Steven Spielberg's much-hyped "West Side Story" was delayed by an entire year, to December 2021.

Those moves came in the wake of disappointing box office returns for mega-budget movies that have braved U.S. theaters this summer, including sci-fi thriller "Tenet" from rival studio Warner Bros.