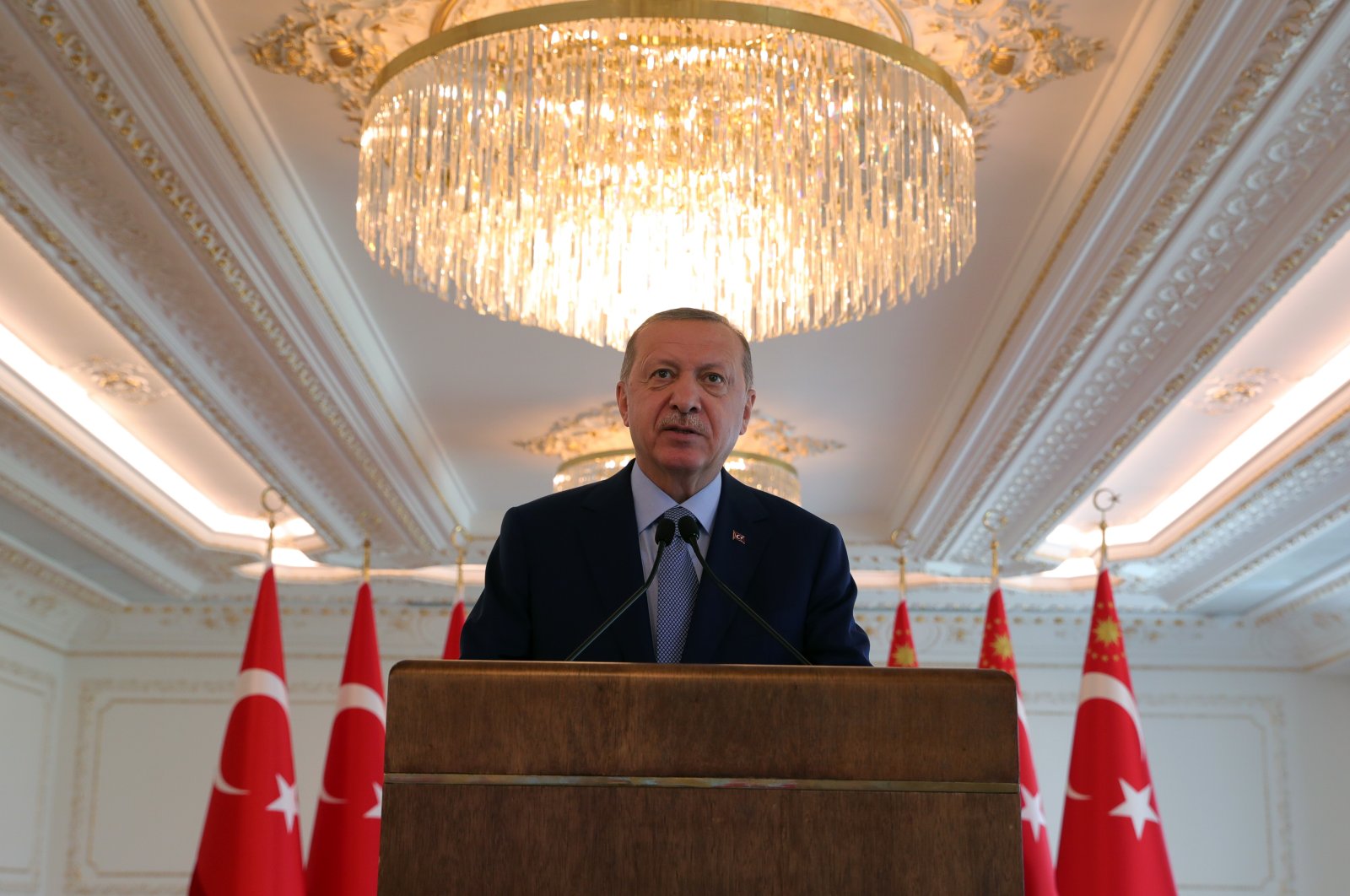 President Recep Tayyip Erdoğan attends the inauguration of a dam in eastern Kars province via videoconference from his office, June 20, 2020. (AA Photo)
by Daily Sabah with Wires Jun 20, 2020 4:24 pm
RECOMMENDED

Economic recovery signals have been “quite strong” since May and “we expect great momentum from the second half of the year,” President Recep Tayyip Erdoğan said.

“We are entering a period where Turkey's weight will be felt more and more in the global production and supply chain. Our high quality and dynamic human capital, strategic position and strong infrastructure are our greatest advantages for evaluating the opportunities ahead. We are closer to our goal of making Turkey among the 10 largest economies in the world than ever before,” Erdoğan said via videoconference during an inaugural ceremony of a dam in the east of the country.

"Recovery signals are quite strong in the economy," he said, predicting that in the second half of the year, Turkey would see "tremendous momentum in the economy."

Erdoğan said the economic confidence index jumped by 20% to 62 in May, while the capacity usage in the manufacturing industry rose to 62.6% in the same month.

“Despite the outbreak, there are also pleasing developments on the investment front. The number of established companies rose 22.2% in May compared with the previous month. Our stock market rose again to over 100,000 points and has approached the band of 115,000. From the beginning of June, mobility in the housing and auto sector gained momentum. Our exporters are working hard both to strengthen their existing markets and to find new markets,” the president noted.

"We've faced the pandemic, in which even developed countries have been left helpless, both with our health infrastructure, our food and cleaning supply chain and exemplary management in terms of public safety," Erdoğan noted.

Turkey had lost some ground in its battle with the coronavirus pandemic, but a focus on hygiene, masks and social distancing will protect people and help the economy rebound in the second half of the year, the president added.

The country started to ease restrictions aimed at reviving the economy as of May and further relaxed them at the beginning of June after a sharp slowdown in the number of new cases and fatalities due to COVID-19, the respiratory disease caused by the virus.

This month, Ankara opened restaurants and cafes and lifted weekend stay-at-home orders and most intercity travel bans. However, there was a worrying jump in infections since June 1 as cases doubled to nearly 1,600 per day.

On Saturday, new virus cases dipped to just over 1,200 with total cases at nearly 186,500, according to the Health Ministry data. Over 158,800 patients have recovered so far.

“The numbers in recent days show that we have lost our position in the fight against the epidemic,” Erdoğan said. “But we aim to remove the pandemic from our agenda by respecting the cleaning, mask and distance rules.”

As citizens have poured out into streets, parks and malls and headed to vacation spots, face masks were made compulsory in major cities on Thursday.

Health and government officials have recently said the country may adopt a harder line on social interactions but said Turkey has no plans to reverse an easing of lockdown restrictions.

Erdoğan further stated that Turkey had added 585 dams to the existing 299 built in the last 18 years under his ruling Justice and Development (AK) Party.

"When we came to power, there were 276 dams in our country. Today, we are bringing the 585th dam in the last 18 years to our country," Erdoğan said.