Erdoğan due in Azerbaijan to attend strategic cooperation council meeting 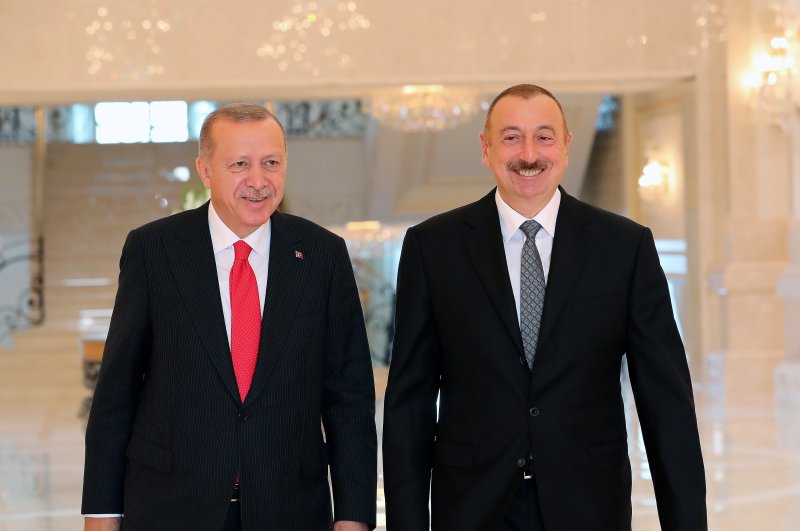 During the visit, Erdoğan and his Azerbaijani counterpart İlham Aliyev will co-chair the eighth meeting of the Turkey-Azerbaijan High-Level Strategic Cooperation Council.

Erdoğan will also hold one-on-one talks with Aliyev. They will discuss steps to further develop bilateral trade between the two countries.

Turkey and Azerbaijan will sign a preferential trade agreement in a strategic cooperation summit. A total of nine agreements on trade, defense, sports and other fields are expected to be signed between the two countries.

The expected mutual customs exemption and discount on 15 different products stand out among the deals to be signed as part of the preferential trade agreement.

Turkish businesspeople in Azerbaijan said the decisions that will be taken at the meeting, especially the preferential trade agreement, will accelerate the development of trade relations between the two countries.

Cemal Yangın, head of the Azerbaijan-Turkey Business Association, told Anadolu Agency (AA) on Monday that the long-term friendship on trading would start with the preferential trade deal between Baku and Ankara.

Hüseyin Büyükfırat, head of the Turkey-Azerbaijan Businessmen's and Industrialists' Association, said the agreement will further advance the trade relations between the two countries, adding that new business areas would open thanks to it.

"We, as businesspeople, will give the utmost support to implement the agreements," Büyükfırat said.

Abdurrahman Uzun, head of Independent Industrialists' and Businessmen's Association (MÜSİAD) in Azerbaijan, said the trade agreement would be a "very valuable deal" for both countries.

He said the agreement would "significantly contribute" to the trade volume and business world between Turkey and Azerbaijan, adding that the businesspeople desire to increase the competitiveness of Turkish products in the Azerbaijani market.

The trade volume between the two countries has been following a steady upward trend over recent years. It amounted to some $1.57 billion in 2016, increased to $1.71 billion in 2017, before reaching around $1.85 billion in 2018, according to the Turkish Statistical Institute (TurkStat) data. It exceeded $2 billion last year, of which Turkey’s exports totaled $1.64 billion and imports reached $395 million.

On the investment side, State Oil Company of Azerbaijan Republic (SOCAR) stands as one of the largest foreign direct investors in Turkey, as its investment will reach up to $19.5 billion once all its ongoing projects have completed.

Its $6.3 billion STAR Refinery, located in the Aliağa peninsula in the Aegean province of İzmir was launched on Oct. 19, 2018. It stands as the largest investment made by a foreign direct investor in the country.

SOCAR plans another petrochemical facility investment in İzmir in partnership with British Petroleum (BP) with an estimated cost of $1.8 billion.

The two countries have also launched one of the biggest energy projects in the region, the Trans Anatolian Natural Gas Pipeline Project (TANAP), in June 2018. It stretches from the Turkish-Georgian border to the Turkish-Greek border to deliver 6 billion cubic meters of Azeri gas to Turkey and 10 billion to Europe per year. The pipeline passes through 20 provinces and 67 districts of Turkey.

On Nov. 30 last year, the Turkish and Azeri presidents inaugurated the project's European link in the northwestern province of Edirne, near the border with Greece.

During the Tuesday visit, Erdoğan and Aliyev will also discuss regional developments, primarily the ones concerning Syria and the Upper Karabakh.

Karabakh – a disputed territory between Azerbaijan and Armenia – separated from Azerbaijan in 1991 with military support from neighboring Armenia, and a peace process is yet to be implemented.

Three U.N. Security Council resolutions and two U.N. General Assembly resolutions refer to Karabakh as being part of Azerbaijan, and the Parliamentary Assembly of the Council of Europe refers to the region as being occupied by Armenian forces.

The Armenian occupation of Karabakh led to the closure of the frontier with Turkey, which sides with Baku in the dispute.