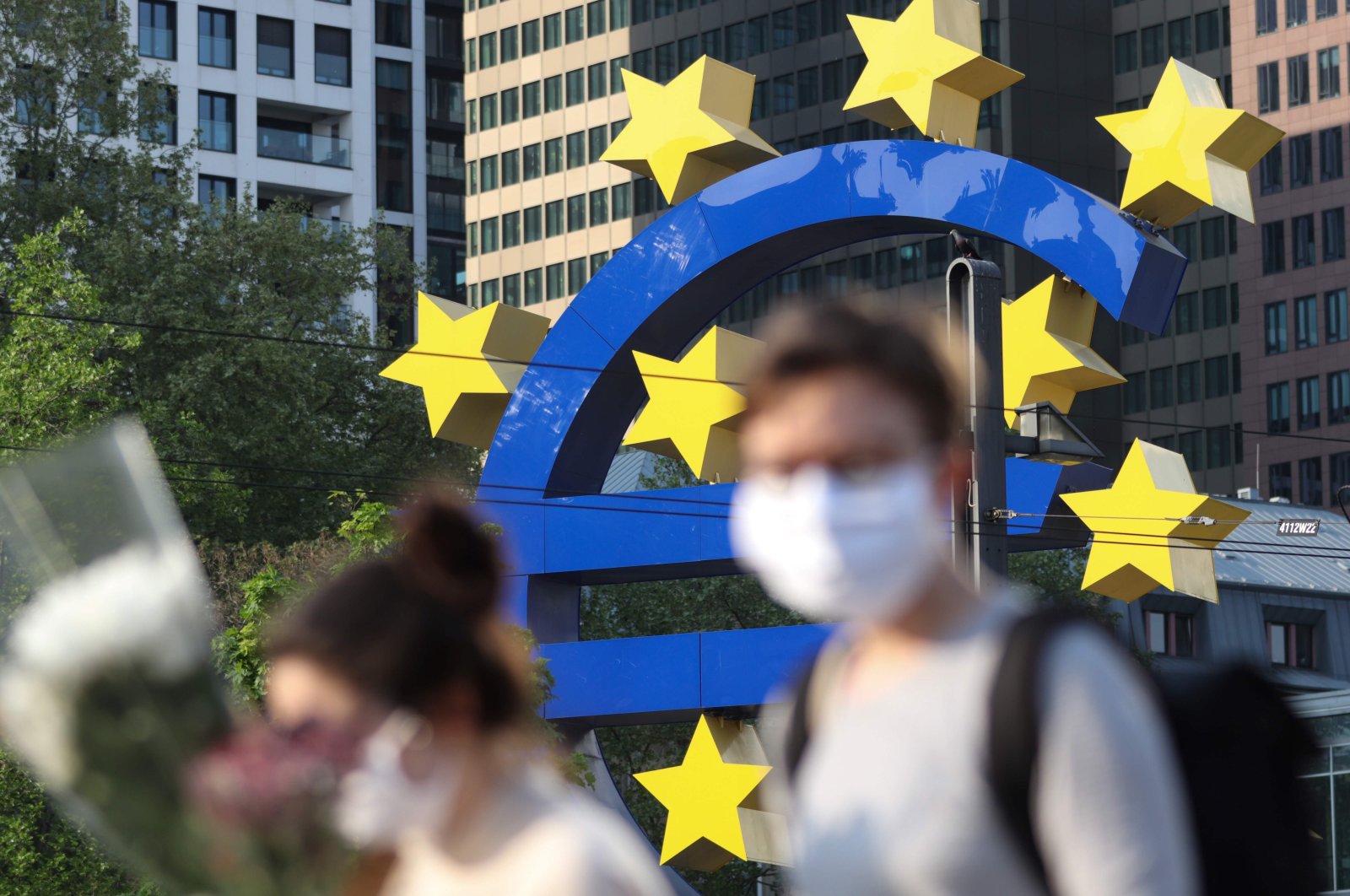 People wearing face masks walk in front of a big euro sign as the European Central Bank (ECB) headquarter can be seen in the background, in Frankfurt am Main, western Germany, April 24, 2020. (AFP Photo)
by Agencies
Oct 29, 2020 4:04 pm

The European Central Bank (ECB) held off from strengthening its stimulus programs despite growing concern that a renewed surge in COVID-19 cases could stall the economy’s recovery from the deep downturn in the first part of the year, even as analysts forecast that the bank will eventually take further action.

But the ECB signaled that more stimulus could be coming at its December meeting, given that risks are “clearly tilted to the downside,” and new staff projections would make “a thorough reassessment” possible.

The bank made no change to its 1.35 trillion euros ($1.58 trillion) pandemic emergency bond purchase program, which pumps newly created money into the economy to keep credit flowing to businesses and promote economic activity. Those regular purchases are set to run through the middle of next year. Analysts say that is one reason the bank is holding off on increasing the amount since there is plenty of stimulus still in the pipeline.

“The Governing Council will recalibrate its instruments, as appropriate, to respond to the unfolding situation and to ensure that financing conditions remain favorable to support the economic recovery and counteract the negative impact of the pandemic on the projected inflation path,” the ECB said in a statement.

Having already extended its copious stimulus until next June, the ECB is buying record amounts of debt, leaving policymakers time to devise their next move and keep the pressure on governments to use their budget levers to help the economy.

But new restrictions aimed at curbing the spread of COVID-19 are weighing on the 19-country eurozone’s economy, raising fears that it could slip back into recession as large parts of the services sector are shut down again.

“In the current environment of risks clearly tilted to the downside, the Governing Council will carefully assess the incoming information, including the dynamics of the pandemic, prospects for a rollout of vaccines and developments in the exchange rate,” the ECB said.

With Thursday’s decision, the ECB also remains on track to buy another several hundred billion euros worth of bonds through other asset purchase schemes. It kept its deposit rate unchanged at a record low of minus 0.5% while the main refinancing rate remains at zero.

The ECB’s key goal is to raise inflation toward its target of below but close to 2%, the level considered best for the economy. Inflation was minus 0.3% in September, partly a result of temporary measures such as a value-added tax cut in Germany but also a sign of weaker than optimal demand.

Economy output plunged 11.8% in the 19 countries that use the euro in the second quarter but is estimated to have rebounded in the July-September months by as much as 10% as businesses reopened. Figures for the quarter are to be released Friday.

Europe has been in part sustained by business ties between Germany, its largest economy, and China, where the pandemic hit earlier but has been largely contained, allowing activity to rebound to near-normal levels. German automaker Volkswagen said Thursday it had increased sales in China by 3% in the third quarter over the same quarter in 2019, before COVID-19.

Massive ECB stimulus and new spending by governments has helped ward off turmoil on financial markets and cushion the downturn. Governments have deployed furlough support programs to pay worker salaries if they are put on short hours or no hours but not laid off. That has held down the rise in unemployment, which was 8.1% in August.

Yet the prospects for the last three months of the year have worsened as infection numbers have risen, raising the possibility of more anti-COVID-19 restrictions. Germany has ordered restaurants, bars and theaters to close from Monday through Nov. 30 in what is being called “lockdown light.” Chancellor Angela Merkel warned of a “difficult winter” in a speech in parliament Thursday. While industrial firms are doing better, services companies that depend on personal contact have been hard hit. Airlines, hotels, trade shows and restaurants have seen devastating drops in revenue.

Analysts say the ECB may use the December meeting to add more stimulus based on new staff projections for growth and inflation. Another reason to wait may be that not all of the 25 members of the governing council agree on the need for more stimulus.