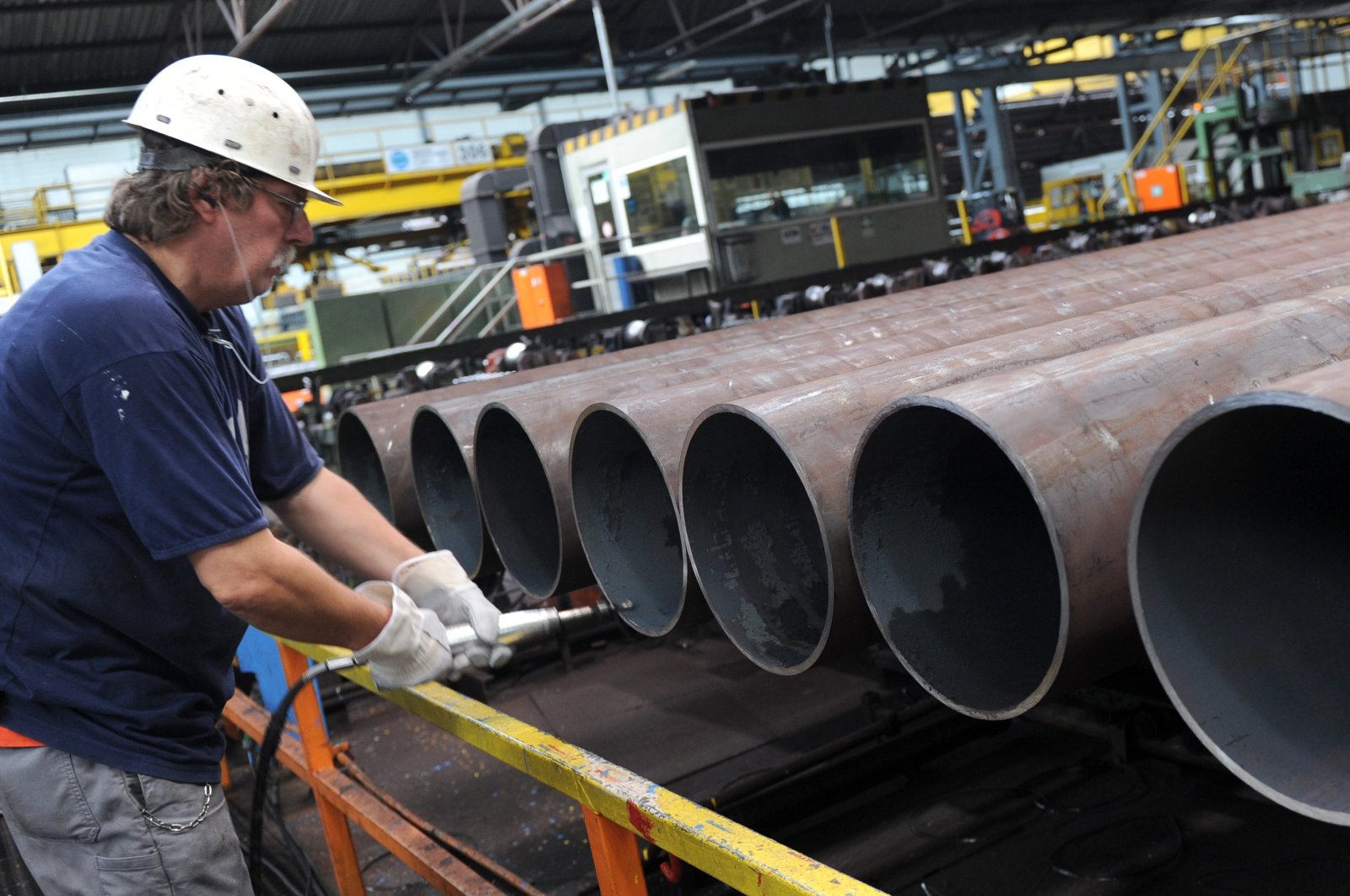 An employee checks a steel pipe in the manufacturing hall at Vallourec and Mannesmann in Dusseldorf, Germany, July 9, 2013. (AP Photo)
by REUTERS Sep 23, 2020 11:43 am
RECOMMENDED

Eurozone business growth ground to a halt this month as the service industry slammed into reverse, knocked by a resurgence in coronavirus cases that pushed governments to reintroduce restrictions and citizens to stay at home, a survey showed.

That renewed downturn for services more than offset the strongest manufacturing growth in two years.

During the height of the pandemic, countries imposed tough lockdown measures to quell the spread of the virus, bringing economic activity to a virtual standstill, but as infection rates fell sharply, most measures were relaxed.

But case numbers have started rising again in key economies, and governments have had to reimpose partial restrictions, sending IHS Markit's Flash Purchasing Managers' Index down to 50.1 in September from August's 51.9.

That was only just above the 50 mark separating growth from contraction and well below the median forecast in a Reuters poll for a modest dip to 51.7.

"Alarm bells should be going off about the pace of the recovery at the moment as the number of new COVID-19 cases has been flaring up," said Bert Colijn at ING.

"For governments and the European Central Bank, this will be a wake-up call, if they needed one," he added.

"A two-speed economy is evident, with factories reporting that production growth was buoyed by rising demand, notably from export markets and the reopening of retail in many countries, but the larger service sector has sunk back into decline."

Wednesday's gloomy survey of private sector businesses suggested "the recovery is grinding to a halt, at least outside the German manufacturing sector," said Jessica Hinds at Capital Economics.

"And with no sign the resurgence in virus cases has been stamped out, there is a clear and growing risk it goes into reverse, at least in the countries worst affected by the virus."

A flash PMI for the bloc's dominant service industry plummeted to 47.6 this month from 50.5, significantly below the breakeven mark and the most pessimistic forecast in a Reuters poll that had predicted a reading of 50.5.

With demand falling and some of the activity coming from running down backlogs of work, services firms cut staffing levels for the seventh month. The employment sub-index dipped to 47.6 from 47.8.

Manufacturers fared much better, with the factory PMI climbing to a just over two-year high of 53.7 from 51.7 and a median forecast of 51.9. While services came in below all expectations, manufacturing was above all of them.

A sub-index measuring output which feeds into the Composite PMI rose to 56.8 from 55.6, its highest since early 2018.

But factories also cut headcount despite a surge in demand to its highest since February 2018. The new orders sub-index rose to 57.1 from 55.4, suggesting the manufacturing recovery would continue.

Overall optimism improved, with the composite future output sub-index rising to 60.3 from 57.8, its highest since February, just before the full effects of the pandemic were felt.

"Encouragement comes from a further improvement in companies' expectations for the year ahead, but this optimism often rests on infection rates falling, which remains far from guaranteed for the coming months," Markit's Williamson said.

The European Central Bank has already planned 1.35 trillion euros ($1.58 trillion) of pandemic-related asset purchases to support the economy, and there is a historic 750 billion euro recovery fund from the European Union due to kick in next year.

But a return to where the economy was before the outbreak is not expected until at least the end of 2022, and the new rise in coronavirus cases is the biggest threat to the recovering economy, according to a Reuters poll of economists.

Separate flash PMIs showed Germany's private sector continued to recover this month but more slowly than expected. In France, the eurozone's second-biggest economy, activity slowed to a four-month low with services weaker than expected as the country struggled to contain a surge in new COVID-19 cases.

In Britain, outside the currency union, the recovery from the lockdown lost some momentum as consumer-facing sectors suffered from the end of a government subsidy to support restaurants and more general COVID-19-related worries.