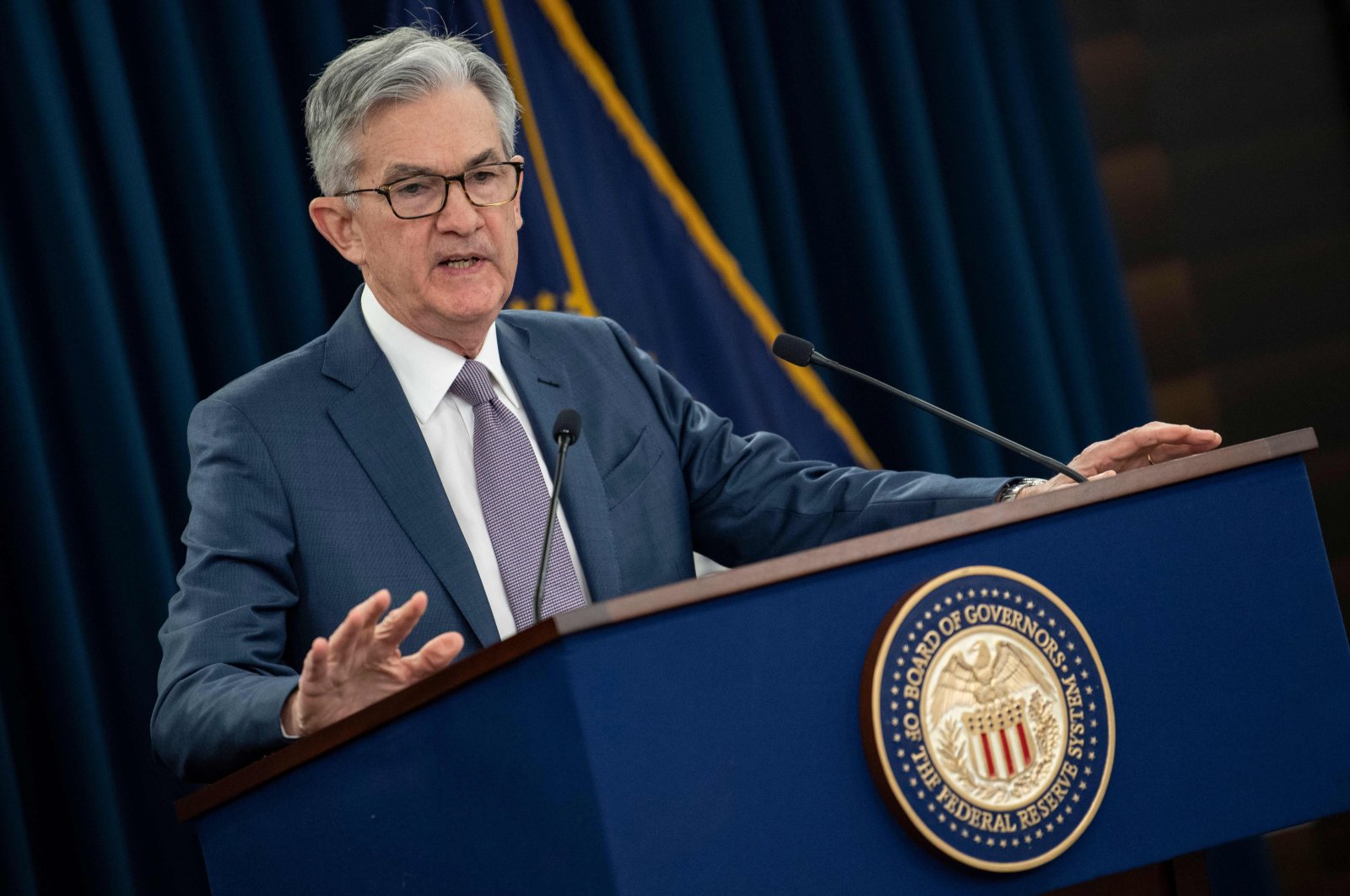 US Federal Reserve Chairman Jerome Powell gives a press briefing after the surprise announcement the FED will cut interest rates on March 3, 2020 in Washington,DC. (AFP Photo)
by REUTERS May 13, 2020 4:06 pm
RECOMMENDED

Federal Reserve Chair Jerome Powell, in a sober review of where the U.S. economy stands on the cusp of its reopening, said Wednesday the country could face an "extended period" of weak growth and stagnant incomes, pledged to use more Fed power as needed and issued a call for more fiscal spending.

For a central banker, who spent part of his career as a deficit hawk and has tried to avoid advising elected officials, the remarks marked an extraordinary nod to the risks the U.S. economy is facing from the combined health and economic crisis brought on by the coronavirus pandemic.

The U.S. response to date "has been particularly swift and forceful," Powell said in a webcast.

"But the recovery may take some time to gather momentum," and be dictated by progress fighting the coronavirus pandemic, he said.

The longer those health risks persist, Powell added, the more likely businesses will fail and households will be strapped for income in a downturn that he noted has fallen most heavily on those least able to cope. A recent Fed survey, he said, estimated that 40% of households with less than $40,000 in income included someone who has lost a job since February.

The worst-case outcome leaves the economy mired in "an extended period of low productivity growth and stagnant incomes ... Additional fiscal support could be costly but worth it if it helps avoid long-term economic damage and leaves us with a stronger recovery," Powell said in what amounted to a direct call for Congress to add to the nearly $3 trillion it has allocated for economic relief during the pandemic struggle.

"This tradeoff is one for our elected representatives, who wield powers of taxation and spending."

U.S. equity index futures dropped after Powell's remarks, erasing earlier gains and pointing to a flat to a slightly negative open for the benchmark S&P 500 index. Yields on Treasury securities slipped, and some contracts in interest rate futures markets further priced in a small chance that the Fed might resort to a negative-rate policy within the year.

The U.S. House of Representatives and Senate are deliberating further responses to the crisis. White House officials have said they want to assess how an initial round of economic reopenings by states go before deciding what to do.

But in remarks webcast by the Peterson Institute for International Economics, Powell mapped out a series of uncertainties that will dictate what happens – including how quickly the virus is controlled and how fast overall confidence returns.

Powell's appearances since the start of the pandemic forced the Fed into a series of emergency actions that have been aimed largely at reassuring people that the U.S. central bank would use its power to keep their finances afloat and to explain the programs it had designed to do so. He repeated that pledge of further action on Wednesday.

But his comments this time come at a different juncture, with an increasing number of U.S. governors now lifting the various restrictions on commerce and activity put in place to slow the spread of the novel coronavirus, and attention turned to whether that reopening will lead to a quick return of economic activity or a second wave of infections.

"The next six to eight weeks will be fundamental" in determining whether consumers and workers feel safe enough to return to the marketplace, and if they are able to do so free of disease," Richmond Fed President Thomas Barkin said in a webcast on Tuesday. "We are at the brink of ... some re-emergence of the economy. It is a question of how do we get the pace up" of the recovery while keeping the health risks under control.

That has become a centerpiece debate in the U.S., pitting the potentially catastrophic health outcomes should the virus resurge against the dire economic consequences of tens of millions out of work and business and family budgets stressed to the point of breaking.

The U.S. economy lost a staggering 20.5 million jobs in April alone and some 33 million Americans have claimed jobless benefits since late March, when many state leaders started telling people to stay home to fight the virus. Some analysts think the economy could shrink by as much as 40% on an annualized basis in the second quarter.

In a Senate hearing on Tuesday, Anthony Fauci, director of the National Institute of Allergy and Infectious Diseases, spoke of the risk the country could "paradoxically" end up worse off if it reopens too haphazardly and ends up with not just new rounds of infections, but a second wave of restrictions on who can go to work and what businesses can stay open.