‘Freedom day’? UK in turmoil as it is set to end COVID-19 curbs 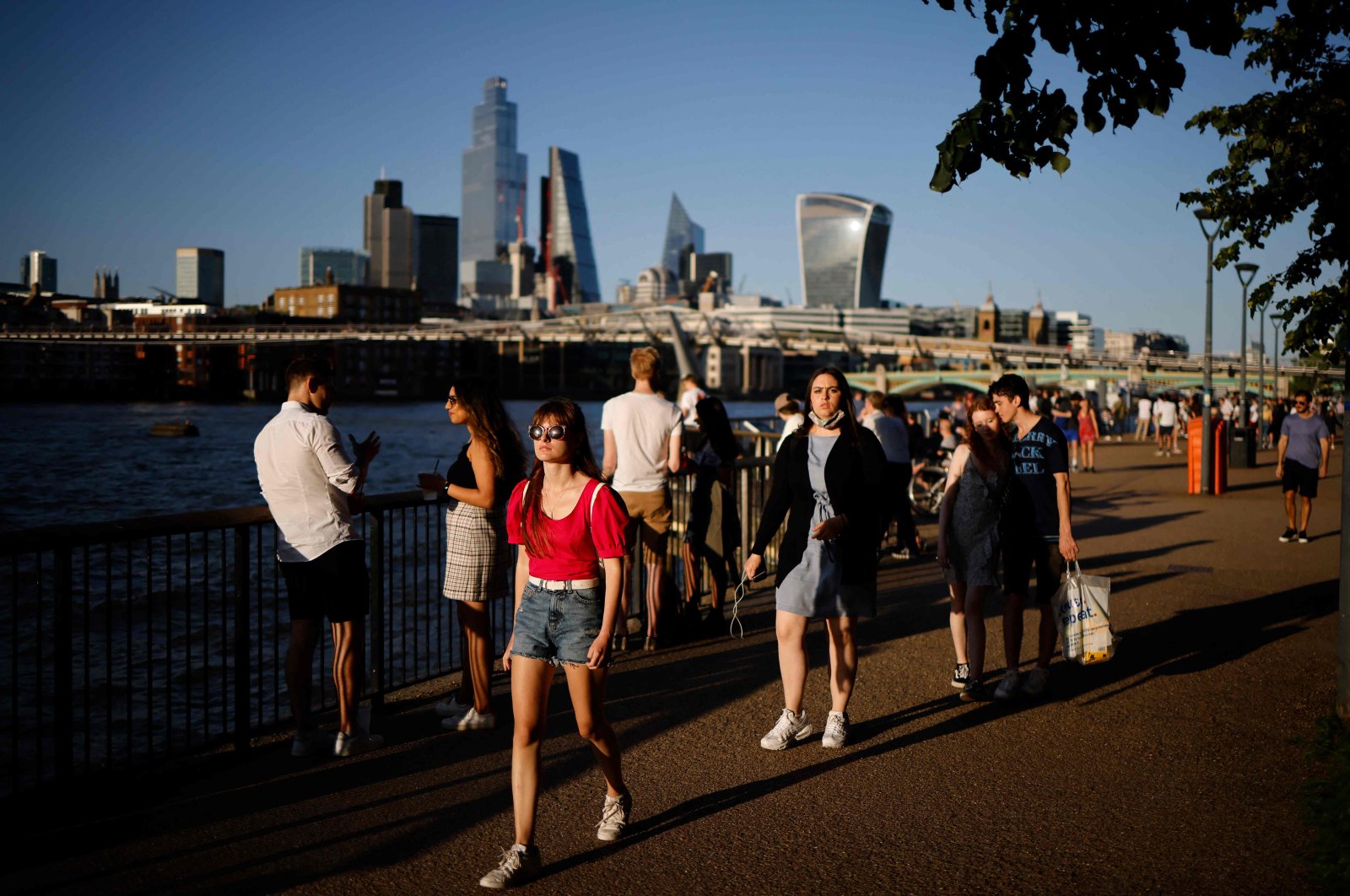 People enjoy the evening sunshine on Thames Embankment by the river Thames with the skyline of the City of London in the background, London, U.K., July 16, 2021. (AFP Photo)
by Agencies Jul 18, 2021 2:21 pm
RECOMMENDED

The U.K. government was thrown into turmoil on Sunday by its own rules on COVID-19 self-isolation just as it is controversially preparing to ditch coronavirus pandemic curbs in England.

As part of the so-called "freedom day,” Prime Minister Boris Johnson is due to move England to Step 4 – the end of legal lockdown curbs – on Monday.

Yet, the excitement at the impending end of COVID-19 restrictions is tempered by worries of rising cases and downright fear among the vulnerable.

Johnson and Finance Minister Rishi Sunak will be working remotely in the week ahead after they came into contact with a person infected with COVID-19, Downing Street said.

Health Secretary Sajid Javid confirmed on Saturday he had tested positive for COVID-19 and was now self-isolating for 10 days.

He had a "lengthy" meeting with Johnson on Friday, according to the Sunday Times. The prime minister nearly died of COVID-19 last year.

Javid also appeared alongside ministers in parliament last week, and one government source told The Telegraph newspaper: "I don't see how half the cabinet doesn't end up in isolation by the end of the week."

Initially, a Downing Street spokesperson said both Johnson and Sunak were taking part in a government pilot that enables them to continue working from their offices, while self-isolating outside of work.

Yet in an update after a storm of anger over the announcement, the spokesperson reversed position and said neither official was participating in the pilot but would conduct business remotely.

Johnson will remain at the prime minister's country retreat at Chequers northwest of London, where he was staying when contacted by COVID-19 tracing officials from the National Health Service (NHS).

The carve-out for the special pilot had provoked uproar among social media users and opposition politicians after millions of schoolchildren and workers were forced to stay home under the tracing rules.

"Sorry for the unparliamentary language but this just takes the pi**," Labour's deputy leader Angela Rayner said on Twitter.

"This govt treat the public with contempt and think they are above the law and that the rules don't apply to them," she wrote.

The development came just as Johnson's government prepares to ditch most pandemic restrictions in England on Monday, despite daily infection rates now topping 50,000 – behind only Indonesia and Brazil.

The government insists that with two-thirds of the adult population now fully vaccinated, the risk can be managed, and Monday has been dubbed "freedom day" by many U.K. media.

Housing Secretary Robert Jenrick told BBC television it was still the "logical moment" to replace legal diktats with "personal judgment," thanks to school summer holidays starting this week and the onset of hotter weather.

But on Sky News, he conceded that the pandemic's current wave may not peak until September and said: "There are going to be some quite challenging weeks ahead."

Jonathan Ashworth, the Labour party's health spokesman, said the government was being "reckless" with its plans for Monday, echoing many scientists who say the reopening endangers global health.

"We are against opening up without any precautions in place," Ashworth told the BBC, attacking in particular the government's plan to drop a mandate for wearing masks.

Under the plan for England, all restrictions on social mixing and an order to work from home will be lifted. Nightclubs can reopen, and sports stadia, cinemas and theaters can operate at full capacity.

Johnson had acknowledged that a wave of infections when restrictions end and more deaths are inevitable, but said worse harm would come from keeping the economy shut and that a successful vaccine rollout has cut the number of serious cases.

Many scientists point to the more transmissible delta variant, which has become dominant in Britain, as changing the calculation since the roadmap was laid out in February.

The surge in infections led to more than 530,000 people being instructed to self-isolate by an NHS app in the week to July 7, according to latest data.

Some companies such as carmaker Nissan have been losing staff en masse after they were pinged by the app – in a brewing crisis described by U.K. newspapers as a "pingdemic."

Staff shortages caused by the isolation rules disrupted the London Underground network on Saturday, with one line suspended entirely.

From August 16, people who are fully vaccinated will no longer need to self-isolate after close contact, but the government is under pressure to bring that change forward.

Jenrick told Sky that for now, the fact that Johnson and Sunak were contacted "shows that the system is working."