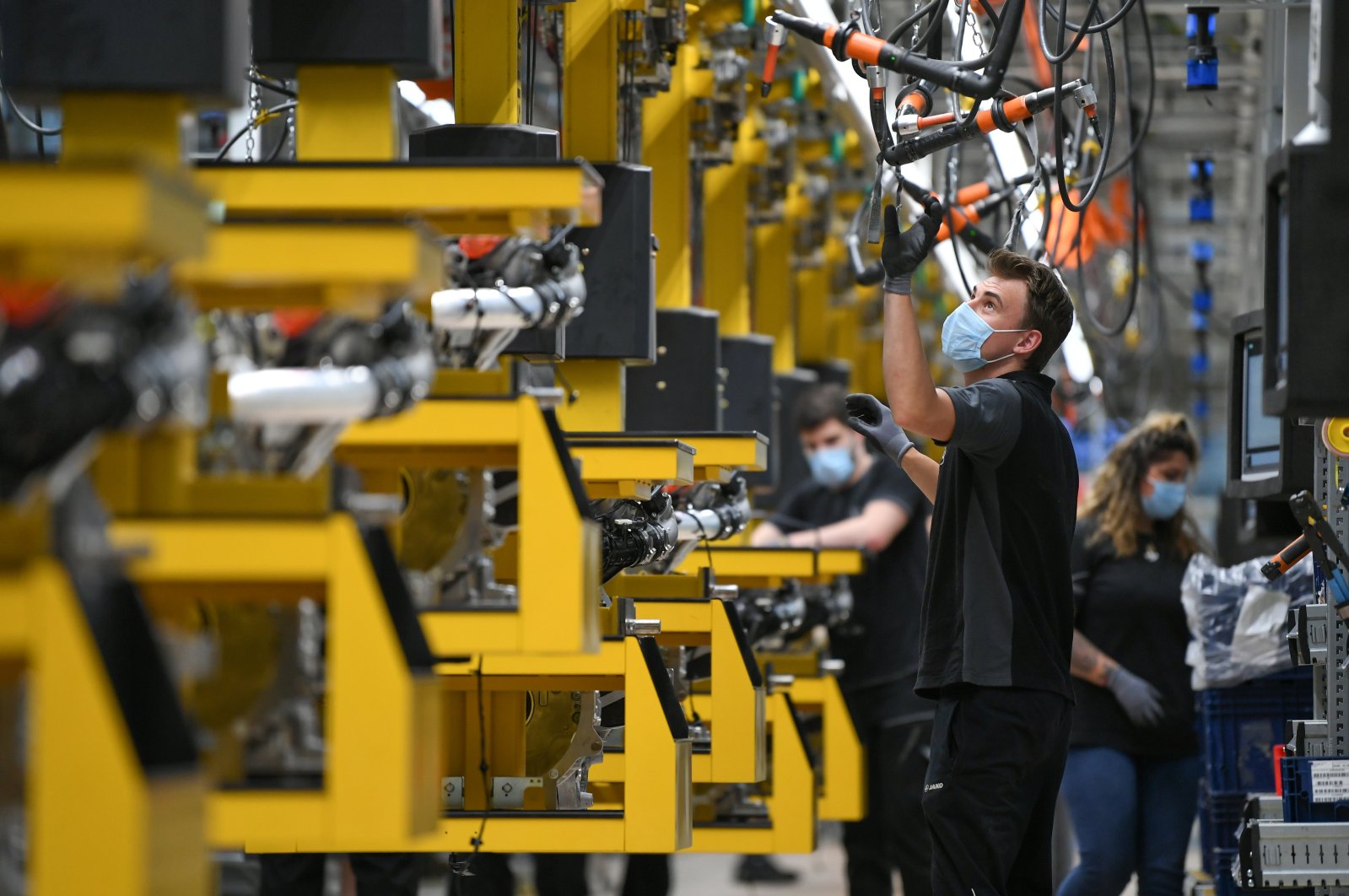 Workers assemble engines for Mercedes-Benz S-class models at the Daimler Powertrain plant in Bad Cannstatt, as the spread of the coronavirus continues near Stuttgart, Germany, April 22, 2020. (Reuters Photo)
by Compiled from Wire Services
Apr 24, 2020 1:52 pm

German business morale crashed in April in its most dramatic fall on record, hitting the lowest reading since reunification as the coronavirus pandemic sends Europe's largest economy into a deep recession.

The Ifo institute said Friday its business climate index of firms from across the economy slumped to 74.3 in April from a downwardly revised 85.9 in March. A Reuters poll of economists had pointed to a fall to 80.0.

"This is the lowest value ever recorded, and never before has the index fallen so drastically," Ifo chief Clemens Fuest said in a statement. "Companies have never been so pessimistic about the coming months."

The index, based on a survey of 9,000 firms, has been around since 1991 but only started including the services sector in 2005.

"Sentiment at German companies is catastrophic," Fuest said. "The coronavirus crisis is striking the German economy with full fury ... Demand for industrial products has collapsed."

As Europe's export powerhouse, the disruption to global trade from the pandemic has clobbered German factories, while domestic lockdown measures to contain the virus have squashed consumer spending.

Highlighting the business impact of the virus, German car and truck maker Daimler reported a plunge of nearly 70% in first-quarter operating profit on Thursday and said the cash flow it uses to pay dividends would fall this year.

An Ifo economist said Germany could see signs of economic recovery from mid-year at the earliest, but added that any recovery from recession was unlikely to be a rapid, V-shaped one.

Separately, the IAB labor market research institute said German unemployment is set to rise by around 520,000 and exceed 3 million this year.

In a research paper, the IAB said it expected Germany's economic output to shrink by 8.4% in 2020, making it the worst recession since World War II.

The government has responded with measures including a 750-billion-euro ($806-billion) stimulus package, but how the economy progresses will depend on how quickly Germany eases lockdown measures.

A gradual easing of restrictions provides for social distancing rules to remain in place until May 3. Schools will start opening from May 4, with priority for final-year students. Hairdressers can also reopen then.

Retailers with floor space of up to 800 square meters are now allowed to open, along with car and bicycle dealers, and bookstores, though they must practice strict social distancing and hygiene rules.

However, Chancellor Angela Merkel is worried that Germans are relaxing their social distancing efforts and is resisting pressure from some states to press ahead with a further easing of restrictions.

She urged the country on Thursday to show endurance and discipline to get through a pandemic that is "still at the beginning," and called for a bigger European Union budget to support economic recovery in the bloc.

Merkel and state leaders will meet on April 30 to review how to proceed, though on Thursday Merkel said they would also meet on May 6, suggesting a delay in consideration of further relaxation and continued pressure on the economy.

"Gross domestic product for the second quarter will be lousy," said Commerzbank economist Joerg Kraemer. "Politicians should use every bit of leeway to further reduce the restrictions on companies and their employees."

The Robert Koch Institute for infectious diseases said the number of confirmed coronavirus cases needs to fall to a few hundred a day to enable further easing of lockdown measures.

Thomas Gitzel, an economist at VP Bank, said that even if a vaccine is developed, the pandemic will have a long-term impact on the structure of Germany's trade-focused economy.

"Supply chains are likely to be questioned. Tendencies toward de-globalization could intensify," he said.