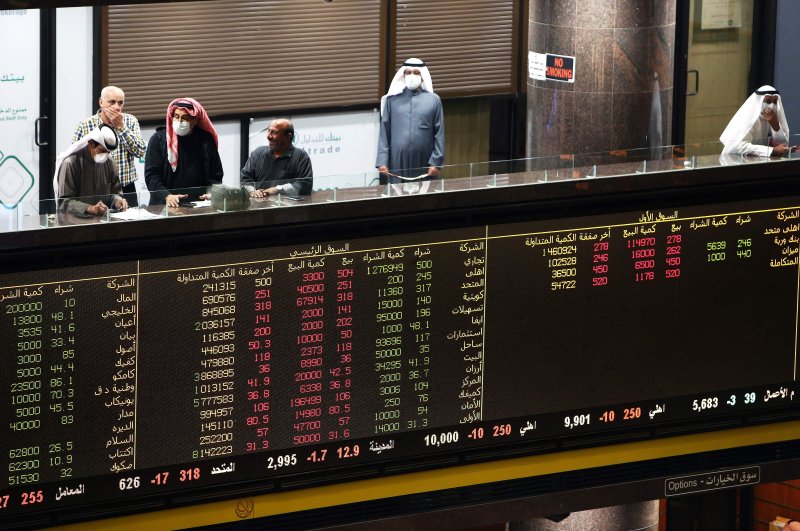 Stock markets in the oil-rich Gulf states plunged Sunday over fears of the impact of the coronavirus, which also battered global bourses last week.

All of the seven exchanges in the Gulf Cooperation Council (GCC), which were closed Friday and Saturday for the Muslim weekend, were hit as oil prices dropped below $50 a barrel.

The Saudi bourse, the region's largest and one of the world's top 10 share markets, was down 3.5% at mid-session.

Energy giant Saudi Aramco dropped to its lowest level since listing on the Saudi stock market three months ago, shedding 2.9% to just marginally above its IPO price, before recovering slightly.

The market value of the world's largest company, which pumps some 10 million barrels per day, dropped to $1.73 trillion, only $20 billion above its value when it was listed to much fanfare in the record-breaking IPO.

The region's slide was led by Kuwait Boursa, where the All-Share Index fell 10%, triggering its closure. Kuwait's bourse was closed for most of last week for national holidays.

The Dubai Financial Market dipped 4.5%, while its sister market in Abu Dhabi was down 3.3% an hour after opening. Bahrain's bourse lost 3.6% and the Muscat Securities Market in Oman edged down 1.1%.

"Initial expectations that the outbreak would be contained within China have proved elusive, as a large number of international cases continue to be reported," he said.

At least 115 cases of the coronavirus have been reported by the Gulf states so far, with the majority of infections among people returning from pilgrimages to Iran.

Global stocks slumped on Friday, marking the largest weekly drop since the 2008 global financial crisis, as concerns grew that the virus spread could wreak havoc on the world economy.

Crude oil prices tumbled as well and analysts said central banks, especially the U.S. Federal Reserve (the Fed), might have to shift into crisis-resolution mode with urgent interest rate cuts.

All six GCC states – Bahrain, Kuwait, Oman, Qatar, Saudi Arabia and the United Arab Emirates – have taken measures to curb the spread of the virus, including cutting off transport links with neighboring Iran, where the death toll from the virus climbed to 54 on Sunday.

Saudi Arabia also banned Muslim pilgrims from traveling to perform the "umrah," or minor pilgrimage, to the holy city of Mecca. The move is likely to deprive the kingdom of billions of dollars in spending by millions of pilgrims and also creates uncertainty over the annual hajj pilgrimage scheduled for July.

The health crisis threatens to further undercut Gulf economies, which are battling a downturn and struggling to wean themselves from a decades-old energy addiction.

Saudi Arabia’s economy grew by a weaker-than-expected 0.3% in 2019 as the oil sector contracted sharply, official data showed on Sunday, although the non-oil sector accelerated.

The world’s biggest oil exporter wants to boost the private sector and diversify its economy away from oil, but sliding oil prices and crude output cuts agreed with the Organization of the Petroleum Exporting Countries (OPEC) allies continue to weigh on its overall growth.

Real economic growth in the non-oil sector increased by 3.3% last year, according to data from the General Authority for Statistics, the strongest growth since 2014.

The overall GDP growth was below an official forecast of 0.9% and the oil sector shrank by 3.6%, marking the Saudi economy’s worst performance since it contracted in 2017.

Expansion of the non-oil sector was mainly driven by growth in the private sector, which amounted to 3.8%, said the statistics authority.

The energy and manufacturing sectors shrank. Saudi exports fell by 10.4% year on year, because of a 14% drop in oil exports, the data showed.

The Gulf states count China as their main trading partner and crude buyer, soaking up about a fifth of their oil.

But China's energy demand has sagged as authorities lock down millions of people to prevent the spread of the illness, dubbed COVID-19, with major knock-on effects for a global economy that is dependent on a buoyant China. The powerhouse accounts for one-third of the growth in oil demand.

The Gulf share sell-off came as the U.S. and Australia reported their first fatalities and China reported a fresh spike in infections.

The list of countries hit by the virus has climbed to nearly 60. The viral outbreak has infected more than 86,000 people worldwide, with deaths topping 2,900. The World Health Organization (WHO), which last month declared the outbreak an international health emergency, raised the global risk level from "high" to "very high" on Friday.

"The news flow today is quite negative and it will make the narrative between now and Monday morning even more important than it was on Friday," said Matt Maley, an equity strategist at Miller Tabak & Co.

Maley said it was still too early to look at worst-case scenarios. "That said, today's markets are highly impacted by momentum-based mechanized trading. If things get going in one direction, it's very hard to turn around," he told Bloomberg News.