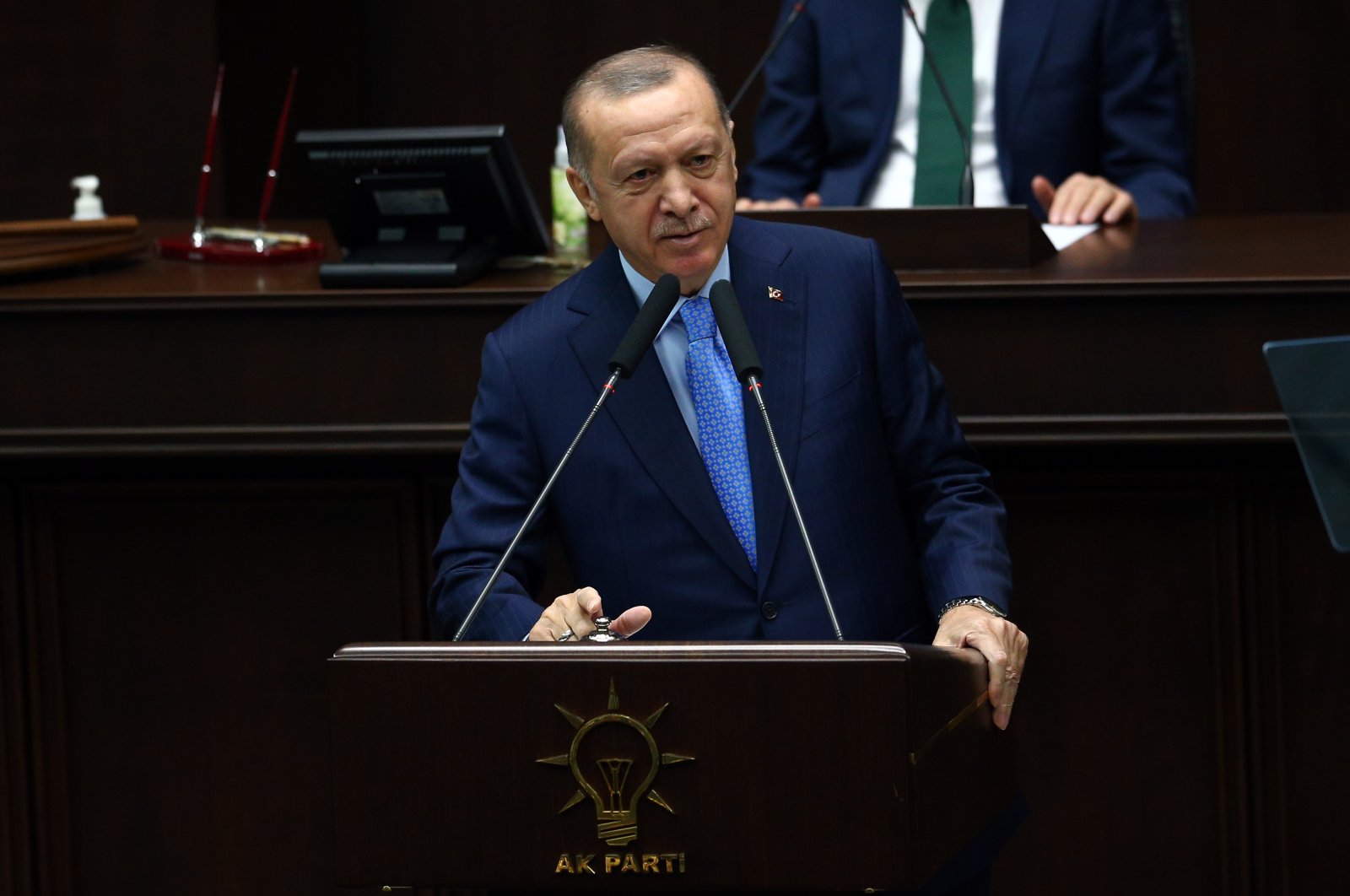 In an apparent shift in economic policy, President Recep Tayyip Erdoğan said Wednesday that the government was forming a new growth strategy and it would begin a new era for the improvement of the country's investment climate.

"We will achieve our goals by building economic policies on three pillars: price stability, financial stability and macroeconomic stability. For this, we are preparing a favorable environment for long-term savings and investments," Erdoğan said in his speech at the parliamentary group meeting of the ruling Justice and Development Party (AK Party) in the capital Ankara.

He added Turkey would hold a series of meetings with international investors to tell them about opportunities and potential of Turkey's economy and the support the country would provide them.

The Turkish lira strengthened as much as 3% beyond 7.9 against the dollar following the president's remarks. It then fell below that level and stood at 7.85 at 6:30 p.m.

Turkey is determined to bring down risk and increase returns for investors, Erdoğan said, adding that new steps will be taken soon to improve the investment climate and make the country's economic policies more effective.

"We will see gains made by domestic and foreign investors who trust Turkey's economy and lira as our own gains," he added.

The president stressed that the policymakers would be in close contact with investors.

Erdoğan went on to say Turkey will focus more on increasing the confidence and credibility in economic policies and reduce the country's risk premium.

"We are building a growth structure which creates qualified employment, does not cause inflation and current account deficit. It is financed mainly by domestic savings and direct international investments," he noted.

"We are also in the preparations for structural reforms in areas such as improving the investment environment, increasing the depth of financial markets, increasing the quality of public revenues and expenditures, preventing informality and good governance," he added.

The country will also take new steps in strengthening the rule of law, predictability, easy accessibility, as well as fast and efficient judicial system in the coming months, the president noted.

"We will strengthen macroeconomic stability by increasing the harmony between monetary, fiscal and financial policies, thanks to effective decision-making mechanisms," he stressed.

Erdoğan added that everyone will see that Turkey leads the countries in providing the highest and most secure earnings for investments.

"Treasury and Finance Ministry and the Central Bank in the finance side, Trade Ministry and Technology Ministry in the real sector side, along with other ministries and business people, we all are working together to make a new economic leap in Turkey," he added.

Turkey is launching a new mobilization focused on stability, growth and employment, with the awareness that a country without a strong economy cannot protect its gains in other areas, he added.

Erdoğan also stressed that he fully supports the new central bank governor and the finance minister, also thanking the former Treasury and Finance Minister Berat Albayrak for his significant services to Turkey.

“I have decided not to continue my ministry duty that I have been holding for five years. From now on, I will spend more time with my father, mother, wife and children, who have always supported me during this time,” Albayrak said on his Instagram account.

“My successors will firmly and confidently continue to march toward our Big and Strong Turkey aim under the leadership of our president,” he added.

“As a result of the evaluation by our president, Finance and Treasury Minister Berat Albayrak’s request to resign has been accepted,” the presidency’s Communications Directorate said in a statement, adding that Erdoğan admired what it said were Albayrak’s successes in his two-year tenure as finance minister.

Albayrak, a former energy and natural resources minister, was appointed to lead Turkey’s Treasury and Finance Ministry in July 2018. He completed his master's degree at New York’s Pace University in finance and holds a Ph.D. in the financing of renewable energy resources.

Erdoğan further stressed that the central bank had a duty to determine policies for price stability and he believed the new governor will use tools transparently in line with the economy's main goals.

"Turkey to implement bitter pill policies if needed," he said. "It is the central bank's job to determine policies that will achieve price stability; in that respect, I support every step they take."

The resulting positive mood in markets show Ankara is on the right track, he noted, adding he was determined to lower inflation to single digits.

Turkey's annual inflation increased to 11.89% in October, up from 11.75% in September, according to official data. Month-on-month, inflation surged 2.13%.

In his first public comments on Monday, Ağbal said the bank's main goal is to achieve and maintain price stability and it will "decisively" use all policy tools in pursuit of this aim.

The bank last month raised its 2020 inflation forecast by more than three percentage points. It forecasts inflation to end the year at 12.1%, up from a previous forecast of 8.9%.

Current financial situations and expectations will continue to be reviewed until the central bank's next policy meeting, set for Nov. 19, Ağbal said.

"Necessary policy decisions will be made with the available data and final evaluations," he added.

The central bank raised rates in September but last month it bucked broad expectations for another policy tightening and held its key rate steady at 10.25%. It raised its late liquidity window rate to 14.75% to counter persistent double-digit inflation.