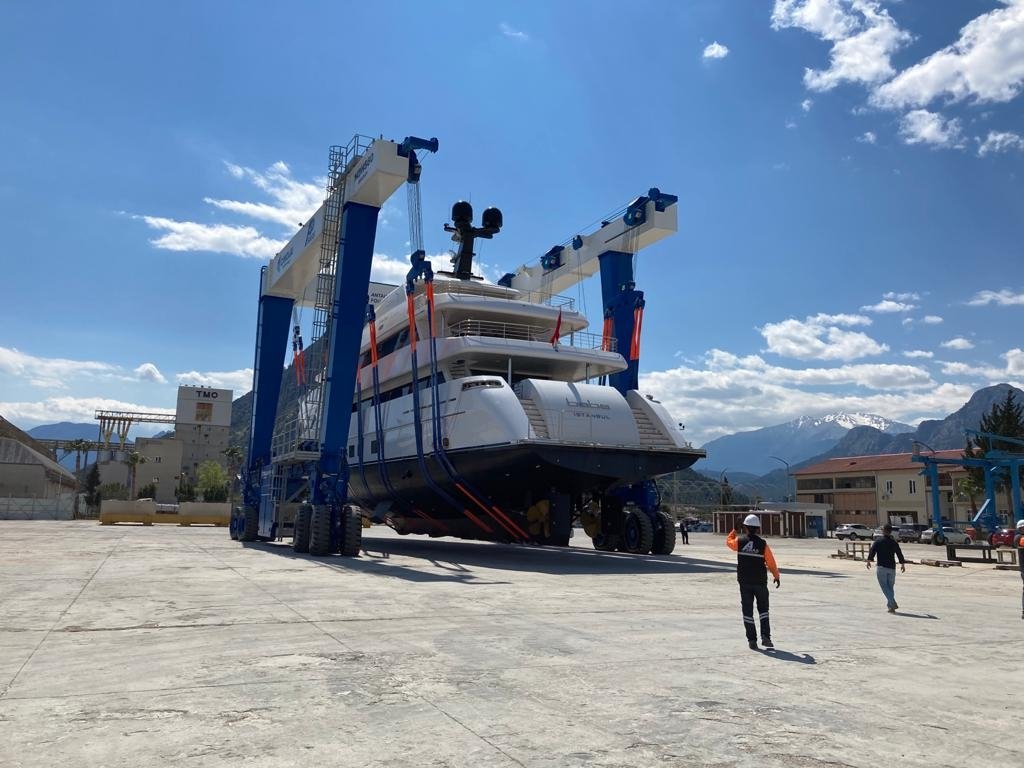 The free zone in Turkey's southern province of Antalya, which plays an important role in Turkey ranking third after Italy and the Netherlands in yacht production, has become one of the most preferred shipyards in the Mediterranean basin for luxury yacht production, maintenance and repair, thanks to the commissioning of a 560-tons carrying capacity travel lift (crane) after recent investments.

The region, which enabled 479 yachts worth nearly $1.3 billion, hit the water over the past two decades, has become one of the most important centers worldwide for yacht manufacturing.

A total of 45 companies, 22 of which are foreign capitalized, operate in the yacht sector in Antalya Free Zone, which receives luxury yacht orders from many parts of the world, including from Italy, the U.K., the U.S., Russia and the United Arab Emirates (UAE).

Yachts ranging from 30 meters (98 feet) to 70 meters are produced in the free zone, which has become even more active with the commissioning of the crane with a carrying capacity of 560 tons.

The crane, assembled in February, has launched or disembarked boats up to 60 meters long from the first days of April following the trial runs in March. As a result, the facility has seen an increase in orders for yacht manufacturing, maintenance and repair.

Antalya Free Zone Founder and Operator Inc. (ASBAŞ) General Manager Zeki Gürses told Anadolu Agency (AA) that they made significant investments at the dock to contribute more to the country's economy. One of these major investments was the crane, considered one of the most modern systems in the world.

Emphasizing that work at the free zone has been zooming along despite the pandemic, Gürses said, “The crane, which provides great convenience in terms of occupational safety for large yachts, launched five boats on the first day of operation.”

In the first six months of last year, when the pandemic hit the most, the overall trade volume of the city's free zone increased by 12% year-on-year from $351 million to $392 million.

Gürses said another important project at the dock will be an elevator system that can launch yachts of up to 2,000 tons and 90 meters long into the sea.

“This will be a very reliable system that will be the first in Turkey. It is used in yacht maintenance and repair centers around the world. We are planning to start operating it as of the end of June,” he added.

When it starts to operate, Gürses said, “We will become an important shipyard with 45 yacht companies, cranes and elevators.” He also noted they are working to facilitate foreign currency flow into not only Antalya but to the country.

“We are a preferred region in the Mediterranean basin for yacht manufacturing, maintenance and repair from abroad, especially in the Middle East,” he added.

Gürses said the yachts built over the past two decades have also boosted the recognition of the region and that with these new investments, the region will host more yachts and receive more orders.

Manufacturing of the vessels in the region began in 2000 and has since carried Turkey to third in the world for yacht production, following Italy and the Netherlands. Yachts up to 30 meters in length have been produced since the early years, and the total length of all 460 yachts is 8,640 meters.

The longer the yacht, the greater its added value and contribution to the national economy.