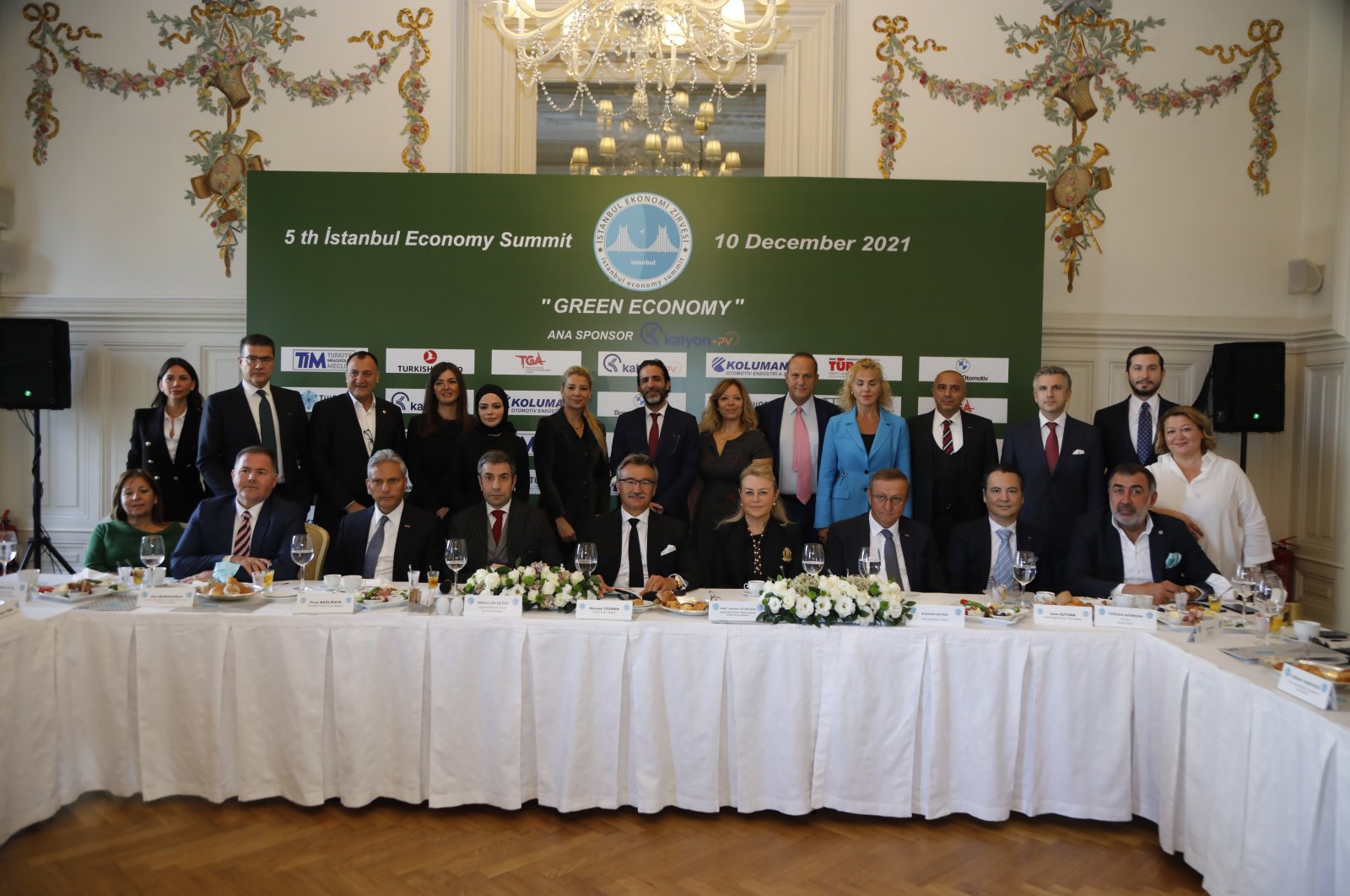 Clean energy, its economic impact as well as new balances in the supply chain disrupted by the coronavirus pandemic, will be addressed at a major summit in Istanbul that will bring together officials and sector executives from Turkey and other countries.

Set to be held on Dec. 10 under the main sponsorship of a major Turkish renewable energy company, Kalyon PV, the fifth edition of the Istanbul Economy Summit will take place under the theme of “Green Economy.”

“We will talk green economy, green bonds and green issues,” said Istanbul Economy Summit Chairperson of the Board Kürşad Tüzmen.

“We will discuss how we can do our work going forward in climatic conditions ... Climate change affects all countries. We have to take our precautions. The extraction of fossil fuels can be stopped,” Tüzmen, who is also a former foreign trade minister, told a press meeting in Istanbul Tuesday.

The event will address topics such as the importance of a green economy in sustainable development, the world’s process of change and transformation in renewable energy, new balances in the supply chain disrupted by the pandemic and digital agriculture.

Each country took its own measures regarding the shutdowns during the pandemic, Tüzmen said, yet stressed, “climate shutdowns will suddenly affect countries altogether.”

“Although countries have different percentages in the emission of carbon dioxide and greenhouse gases, all nations will somehow be affected by this,” he noted.

He also elaborated on the European Union’s Green Deal, which he said is an economic growth model and should be seen as a strategy that gives sectors and companies the opportunity to reshape, restructure and use resources efficiently.

The Green Deal seeks to overhaul the bloc’s economy to reach net-zero greenhouse gas emissions by 2050 – a goal that will require huge investments in low-carbon power and infrastructure.

“We need roadmaps so that we can evaluate these opportunities that will arise with the Green Deal and eliminate possible risks,” Tüzmen said.

The transition to a low-carbon economy can bring major gains, he suggested.

“The global climate agenda did not lose its priority even during the pandemic, but on the contrary, it became even more important in many countries, especially in the EU,” Tüzmen added.

“During this period, we see that countries, including China, have announced their carbon-neutral goals, while the United States has returned to the agenda of the Paris Climate Agreement.”

Turkey earlier this month became the last country in the G-20 group of major economies to ratify the Paris Climate Agreement, after demanding for years that it must first be reclassified as a developing country, which would entitle it to funds and technological help.

Turkey signed the Paris accord in April 2016 but did not initiate the ratification process, arguing that it should not be deemed a developed country for the purposes of the accord and was responsible for a very small share of historic carbon emissions.

“Within the framework of all these developments, it is very important for Turkey to take strong steps in the fight against climate change and not to fall behind in global competition,” said Tüzmen.

“For this reason, we think that we should consider the Paris Climate Agreement, which the EU also refers to in the next generation of its trade agreements, as a strategic priority,” he added.

“We share the need for a roadmap that will guide our industry, export-intensive sectors, and service sectors with our public and international stakeholders; we contribute to legislation studies with our opinions. At the same time, we are continuing our awareness efforts on enhancing good examples that can inspire the private sector,” he outlined.

Also addressing the meeting, Abdullah Değer, chairperson of the executive committee of the Istanbul Economy Summit, said the event is Istanbul-based but is a platform that addresses global issues.

For his part, Turkish Travel Agencies Association (TÜRSAB) Chairperson Firuz Bağlıkaya said tourists have also started to pay more attention to environmental policies, saying the consciousness has been on the rise.

“Now tourists pay attention to the environmental policies of the country they are going to. If we want a more livable and sustainable world, it is very important that we respond to these extremely justified demands,” Bağlıkaya noted.

He stated that it is important to focus on the sustainable rotation of the wheels in the tourism sector by taking into account environmental sensitivity in the following period.

The Istanbul Economy Summit will also address environmental, economic and socio-cultural effects of ecotourism, which will be discussed during a panel expected to be attended by the Green Economy World Council chairperson.

In his speech at the meeting, Başaran Bayrak, the deputy chairperson of the Turkish Exporters’ Assembly (TIM), said Istanbul on its own generates a significant economy while adding value and creating employment.

“Istanbul is a larger economy than that of many countries with an annual number of foreign tourists approaching 15 million, exports of some $85 billion and a gross domestic product (GDP) of $257 billion that it produces. It is such that its share of Turkey’s labor force is more than 20%, while its share of the country’s exports and imports is more than 50%,” Bayrak noted.

He said the ecosystem created by the Istanbul Economy Summit establishes the basis for both strong economic added value and a global business network.

The Istanbul Economy Summit will be organized in cooperation with many institutions and companies, including the TIM, Turkey Tourism Promotion and Development Agency, TÜRSAB, Turkish Cargo, Borusan Otomotiv, Mercedes-Benz Türk and Sanofi Health Products.