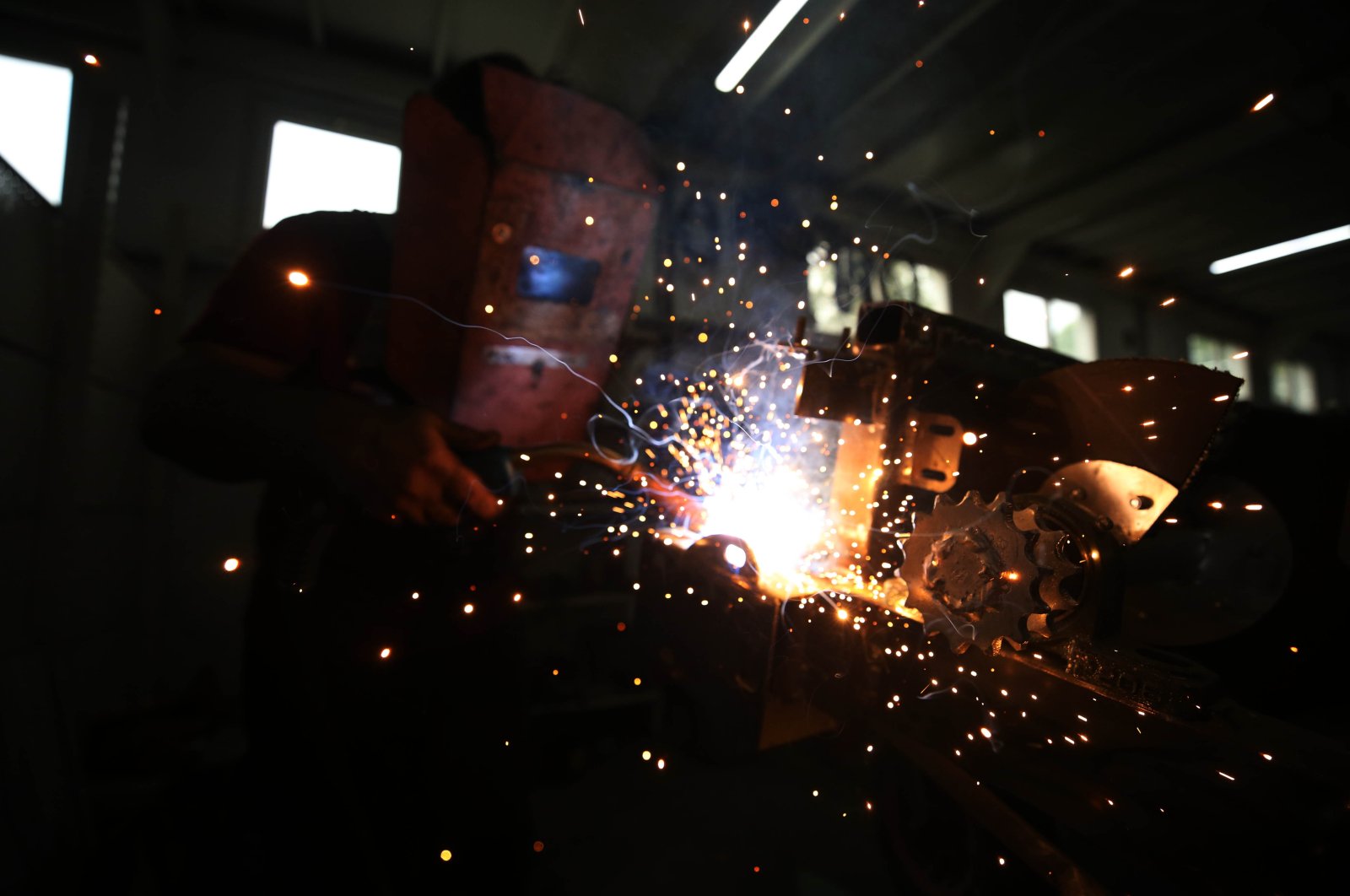 The latest business confidence and activity data signals a further rebound as the Turkish economy goes into the third quarter, leaving behind a period marked by lockdown measures to slow the spread of COVID-19

A score of data released Monday brought along increasing optimism, indicating that business confidence and economic activity have been recovering in Turkey in July, a month that marked a return to normal and the lifting of most coronavirus lockdown measures.

“Let's turn the wheels faster together,” said Treasury and Finance Minister Berat Albayrak, citing the data by the Central Bank of the Republic of Turkey (CBRT) that showed business confidence among Turkish manufacturers rose by 8.1 points to 100.7 points in July compared to 92.6 points in June.

A score of 100 or more denotes optimism, while a number below the 100 mark designates pessimism.

The rise in July follows an upward trend of the last three months since the real sector confidence (RSCI) dipped by 32.9 points to 66.80 in April, when the pandemic was felt the most. The figure in July marked a 1.9-point increase compared to the same month of 2019.

According to the CBRT data, the seasonally adjusted real sector confidence index (RSCI-SA) rose by 9.6 points to 99.4 in July, compared to the previous month.

The RSCI-SA in July came in above the levels seen in the last quarter of 2019, said Anadolu Agency (AA) financial analyst and economist Haluk Bürümcekçi, who noted the figure has maintained its apparent recovery.

Pointing to the RSCI-SA, Bürümcekçi noted it came in near the levels of the last quarter of 2019. “It has started the third quarter below the average level of 103.9 in the first quarter. Last year, the average had been 106.3 in the final quarter and 100.3 throughout the year. As it is known, the adjusted data had proven to be a more important leading indicator, lending an image more in line with the growth trend.”

The data is known to generally closely watch the Purchasing Managers’ Index (PMI), which ended a three-month period of moderation in May, having surged to 53.9 from 40.9 in the month, passing above the 50 mark that separates expansion from contraction, he added.

“Therefore, this increase points that the PMI index maintained its performance in July,” Bürümcekçi told AA.

The recovery in July comes after the country started to ease restrictions aimed at reviving the economy as of May and further relaxed them at the beginning of June after a sharp slowdown in the number of new cases and fatalities due to COVID-19, respiratory disease caused by the coronavirus.

Albayrak, on his Twitter account, also praised the indices that showed that confidence in Turkey’s services, retail trade and construction sectors advanced considerably in July as coronavirus restrictions were eased.

“Our economy is rising again step by step,” the minister said.

The services confidence index registered the largest improvement this month, up 20.2% from June to 66.7 points, as the business situation and demand turnover improved over the past three months, Turkish Statistical Institute (TurkStat) data showed Monday.

The seasonally adjusted confidence index, which was 55.5 for services in June, increased by 20.2% in July to 66.7, the data showed.

The retail trade sector index climbed 9.6% to 94.6 during the same period, as managers in the sector saw the business activity-sales subindex jump notably from June.

The seasonally adjusted retail trade confidence index was up by 9.6% in July to 94.6, according to the data. In the industry, the business activity-sales subindex over the past three months surged by 43.1% to 69.6%.

The statistical body said the subindex measuring the business activity-sales expectation over the next three months increased by 7.3% to 103.9.

“God willing, the pessimistic predictions on the Turkish economy will come up empty again,” Albayrak said.

He also pointed to a rise in the manufacturing capacity this month, citing data by the CBRT.

The central bank said the manufacturing industry used 70.7% of its capacity in July. Month-on-month, the capacity utilization rate (CUR) of the sector increased by 4.7 percentage points, the bank survey showed.

The average capacity utilization rate, which was 75.6% in the first quarter and 63.4% in the second quarter, has entered the third quarter with an apparent recovery, Bürümcekçi said.

The rate had dropped all the way down to 61.6% in April this year before it increased to 66% in June amid normalization in activity.

The figures are based on the responses given to the CBRT's business tendency survey by local units operating in the manufacturing industry, according to the bank. Some 1,749 companies responded to the survey this month.

Among the six main industrial groups, the highest capacity usage was 73.3% for intermediate goods, while nondurable consumer goods posted the lowest rate with 66.9%.

Bürümcekci said the recovery in machinery-equipment investments was interrupted in the second quarter and there could be a limited recovery in the third quarter.