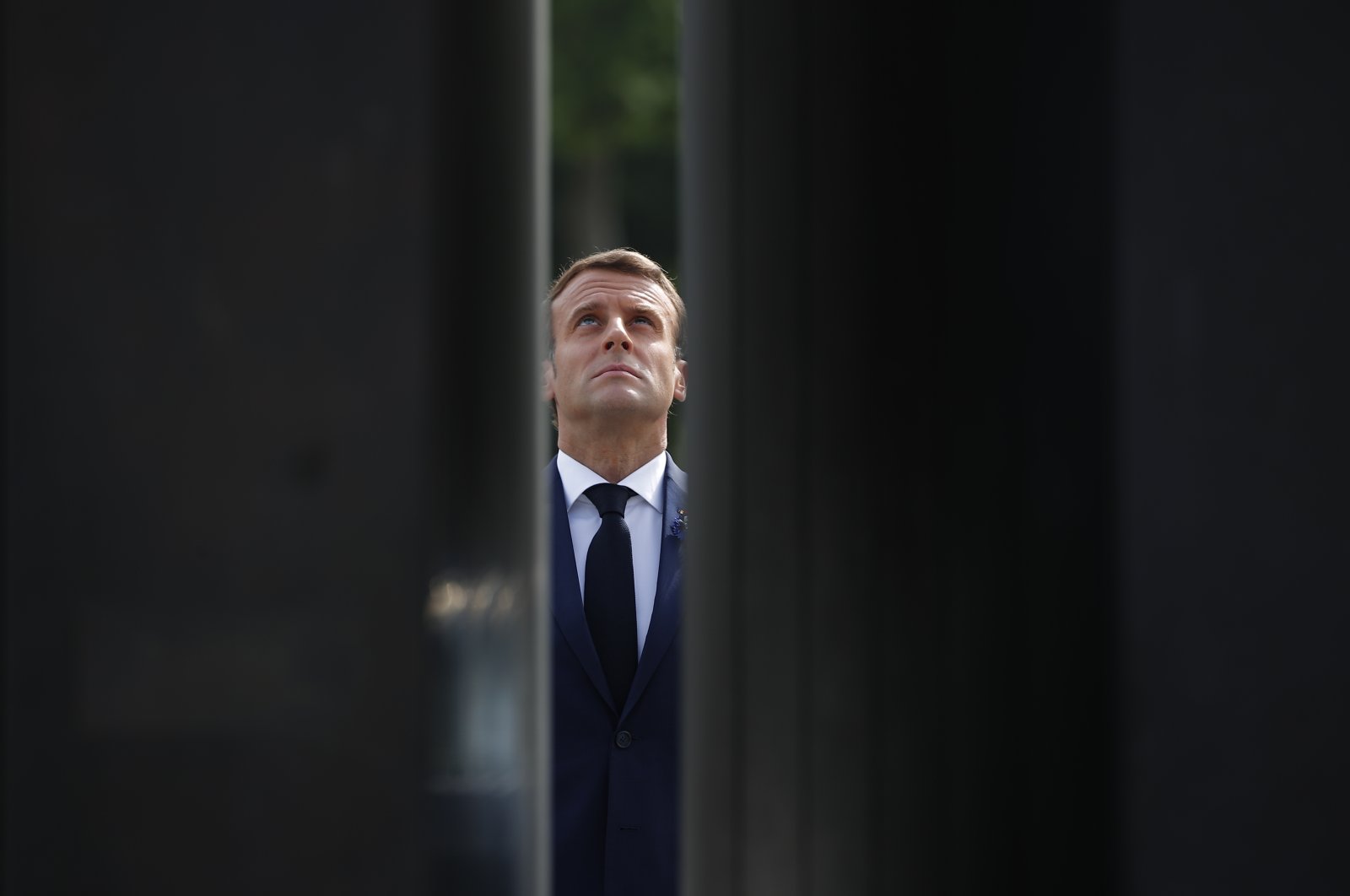 French President Emmanuel Macron looks up at the statue of General Charles de Gaulle during Victory in Europe Day ceremonies, May 8, 2020. (AP Photo)
by ASSOCIATED PRESS May 09, 2021 12:25 pm
RECOMMENDED

President Emmanuel Macron’s plans for bringing France out of the pandemic are not just about resuscitating long-closed restaurants, boutiques and museums. They are also about preparing his possible campaign for a second term.

A year before the next presidential election, Macron is focusing on saving jobs and reviving the pandemic-battered French economy as his country inches out of its third partial lockdown.

The centrist president's ability to meet the challenge will be significant for his political future and for France – which is among the world's worst-hit nations with the fourth-highest number of reported COVID-19 cases and the eighth-highest death toll at more than 106,000.

While he has not officially declared his candidacy, Macron has made comments suggesting he intends to seek reelection. And he has pushed recent legislation on issues that potential rivals on the right and the left hold dear, from security to climate change.

Pollsters suggest Macron, who four years ago became the youngest president in French history, has a good chance of winning the presidency again in 2022 despite his government’s oft-criticized management of the pandemic and earlier challenges to his policies, from activists protesting what they see as social and economic injustice to unions angry over retirement reforms.

The coronavirus reopening strategy Macron unveiled this month calls for most restrictions on public life to be lifted June 30, when half of France's population is expected to have received at least one vaccine shot. With up to 3 million people in France getting vaccinated each week, the government plans to allow outdoor areas of restaurants and cafes, as well as museums and nonessential shops, to resume operating on May 19.

In an interview with French media, Macron said he would visit France’s regions over the summer “to feel the pulse of the country" and to engage with people in a mass consultation aimed at “turning the page of that moment in the nation’s life.”

“No individual destiny is worthwhile without a collective project,” he said, giving the latest hint about a potential reelection bid.

At the moment, all opinion polls show Macron and Marine Le Pen, the far-right leader he beat in a presidential runoff election in 2017, again reaching the runoff next year. The polls also forecast that Macron would defeat National Rally leader Le Pen again, though by a smaller margin.

Macron, 43, a former economy minister under his predecessor, Socialist President Francois Hollande, has characterized his policies as transcending traditional left-right divides. He was elected on a promise to make the French economy more competitive while preserving the country's welfare system.

Macron’s government includes major figures previously belonging to conservative party The Republicans, including his prime minister and the finance and interior ministers.

French politics expert Luc Rouban, a senior researcher at the National Center for Scientific Research, said the president's immediate goal “is to show he is still able to continue implementing his project, which has more or less been stopped by the health crisis.”

Macron's recent priorities demonstrate he also is trying to attract voters from the moderate right and the moderate left, the same ones who helped him win the first time, Rouban said.

Macron is “undermining the field of The Republicans by strengthening security laws, taking measures to protect the French against terrorism, reinforcing security also in urban areas, increasing police and justice staff,” he said.

At the same time, Macron needs to show he is addressing inequality, economic mobility and other social justice issues that are important to France's left wing, Rouban said.

Last month, the president decided to do away with France’s elite graduate school for future leaders, the Ecole Nationale d’Administration. He said his alma mater would be replaced with a more egalitarian institution.

In the French newspaper interview, Macron also praised the country's benefits for low-income workers, who since 2019 have received up to an additional 100 euros ($120) per month.

Macron’s public image appears to have partially recovered from the drubbing it took at the height of the “yellow vest" movement, which started in late 2018 to oppose a fuel tax and grew into a weekly anti-government protest targeting alleged social and economic injustice. At the time, critics angry over Macron eliminating a wealth tax labeled him the “president of the rich.”

But Macron’s popularity in recent months has remained relatively stable, with an approval rating between 30% and 46%, higher than his predecessors Hollande and Nicolas Sarkozy had after four years in office.

Frederic Dabi, deputy director-general of the polling organization IFOP, said Macron’s support appears “very solid.” Polls show his policies are satisfying most of his 2017 supporters, and 30% to 50% of voters from the traditional right- and left-wing parties.

During the virus crisis, Macron applied a “whatever it takes” strategy based on state intervention to save jobs and businesses, including a massive partial unemployment program and subsidized child care leave. The government also approved a two-year 100 billion-euro rescue plan to revive the economy.

Macron promised there would be no tax increases to repay the debt, which soared last year to 115.7% of gross domestic product.

Despite strong opposition from unions about planned changes to the pension system and unemployment benefits, he has pledged to keep reforming “until the last quarter-hour” of his five-year term, which runs out in May 2022.

Recent polls show no strong rival emerging so far from mainstream French parties amid divisions on both the right and the left. But at this stage, the field remains wide open.

As Macron himself proved in 2017, when he shot from a wild-card candidate to the presidency in less than four months, anything could happen in the next year.