Millions of Americans could be left homeless as eviction ban expires 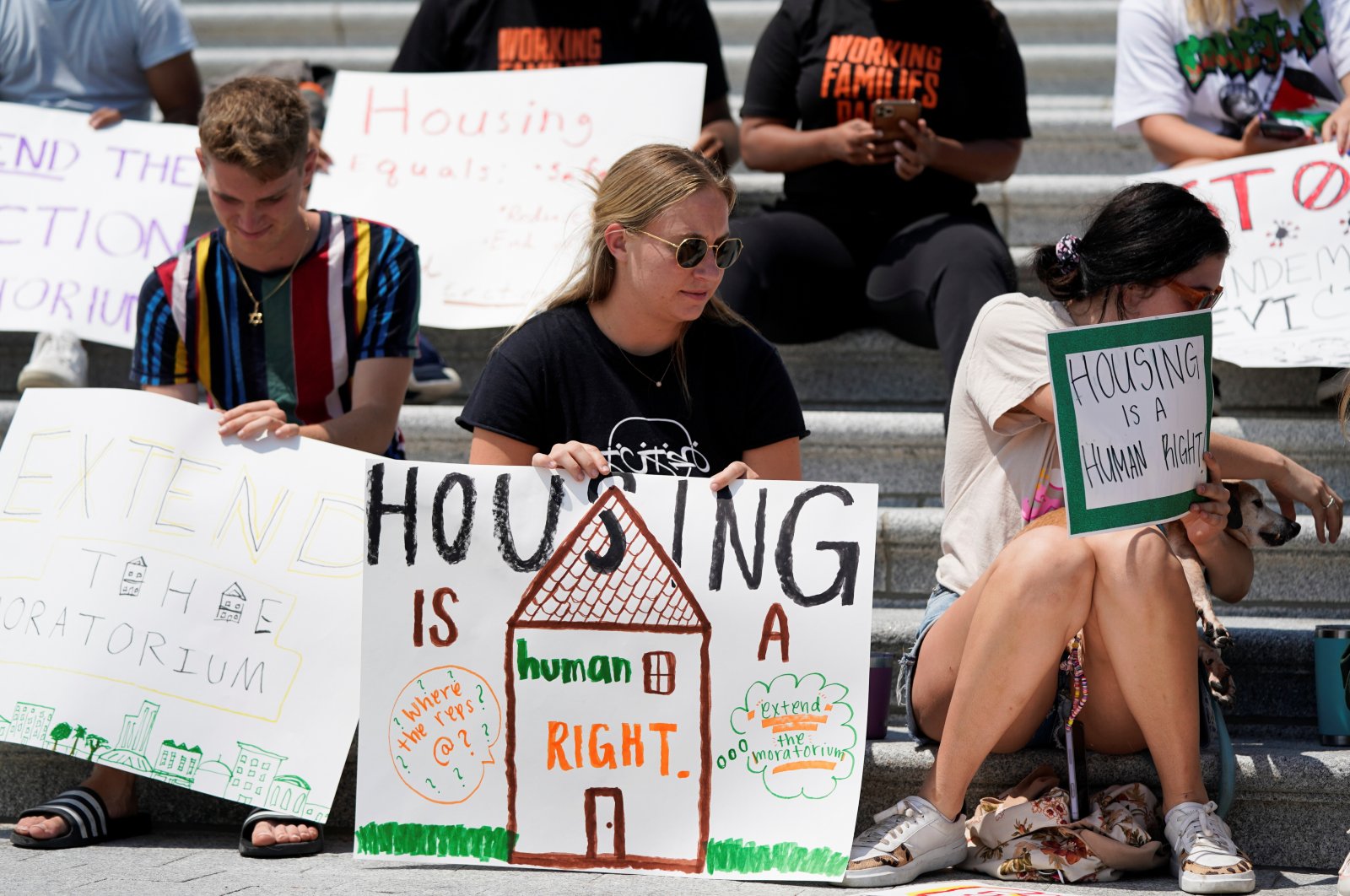 People camp out on the steps of the U.S. Capitol to highlight the upcoming expiration of the pandemic-related federal moratorium on residential evictions, in Washington, U.S., July 31, 2021. (Reuters Photo)
by Agencies
Aug 01, 2021 12:37 pm

A pandemic-related U.S. government moritorium on residential evictions expired at midnight on Saturday, putting millions of American renters at risk of being forced from their homes.

The expiration was a blow to President Joe Biden, who on Thursday made a last-ditch request to Congress to extend the moratorium, citing the raging delta variant.

On Friday, the U.S. House of Representatives adjourned without reviewing the tenant protections after a Republican congressman blocked a bid to extend it by unanimous consent until Oct. 18. Democratic leaders said they lacked sufficient support to put the proposal to a formal vote.

The U.S. Senate held a rare Saturday session but did not address the eviction ban. The White House had made clear it would not unilaterally extend the protections, arguing it does not have the legal authority to do so following a Supreme Court ruling in June.

More than 15 million people in 6.5 million U.S. households are currently behind on rent payments, according to a study by the Aspen Institute and the COVID-19 Eviction Defense Project, collectively owing more than $20 billion to landlords.

With the clock ticking, the country is braced for a heartbreaking spectacle – families with their belongings at the curbside wondering where to go.

One of those at risk is Terriana Clark, who was living out of a car with her husband and two stepchildren for much of last year, before finding a teaching job and an apartment in Harvey, Louisiana.

Jobless again and struggling to pay rent after a bout of illness, the 27-year-old told The New Orleans Advocate she applied to a local assistance program four months ago, but is still waiting for help.

Up north in Michigan, Mary Hunt, who makes minimum wage driving a medical taxi, likewise fell behind on her rent on a mobile home because she got sick with COVID-19.

She was served with eviction papers, and frets over what she will do with her stuff and her five cats and one dog.

"How do I choose which cats to keep? It's not going to happen. I'm not going to leave any of them behind," Hunt told National Public Radio this week.

"If I lose this house, then they go in the car with me. And people can think I'm a crackpot, but I'm not giving up my family," Hunt said.

Democratic Senator Elizabeth Warren on Saturday said that in "every state in this country, families are sitting around their kitchen table right now, trying to figure out how to survive a devastating, disruptive and unnecessary eviction."

Democratic Representative Cori Bush and others spent Friday night outside the U.S. Capitol to call attention to the issue.

She asked how parents could go to work and take care of children if they are evicted. "We cannot put people on the street in a deadly global pandemic," Bush said on Saturday.

Landlord groups opposed the moratorium, and some landlords have struggled to keep up with mortgage, tax and insurance payments on properties without rental income.

An eviction moratorium has largely been in place under various measures since late March 2020. The ban by the U.S. Centers for Disease Control and Prevention (CDC) went into effect in September 2020 to combat the spread of COVID-19 and prevent homelessness during the pandemic. It has been extended multiple times, most recently through Saturday.

CDC said in June it would not issue further extensions. A CDC spokeswoman confirmed that the moratorium had expired but declined to comment further.

House Speaker Nancy Pelosi, in explaining the need to extend the eviction ban, noted that out of $46.5 billion in rental relief previously approved by Congress, "only $3 billion has been distributed to renters."

Late Saturday, Pelosi said lawmakers were demanding "the $46.5 billion provided by Congress be distributed expeditiously to renters and landlords."

She said blocking the measure was "an act of pure cruelty ... leaving children and families out on the streets," in a tweet late Saturday.

Several left-wing Democrats spent the night outside the Capitol in protest, calling out their colleagues over the failure to act.

"We slept at the Capitol last night to ask them to come back and do their jobs. Today's their last chance," tweeted Congresswoman Cori Bush, who has herself experienced homelessness and was joined by fellow progressives Ilhan Omar and Ayanna Pressley.

Some Democratic lawmakers early Sunday were rallying outside the Capitol to call for the ban's reinstatement.

Some states like California and New York have chosen to extend eviction moratoriums beyond July 31. Federal agencies that finance rental housing on Friday urged owners of those properties to take advantage of assistance programs and avoid evicting tenants.