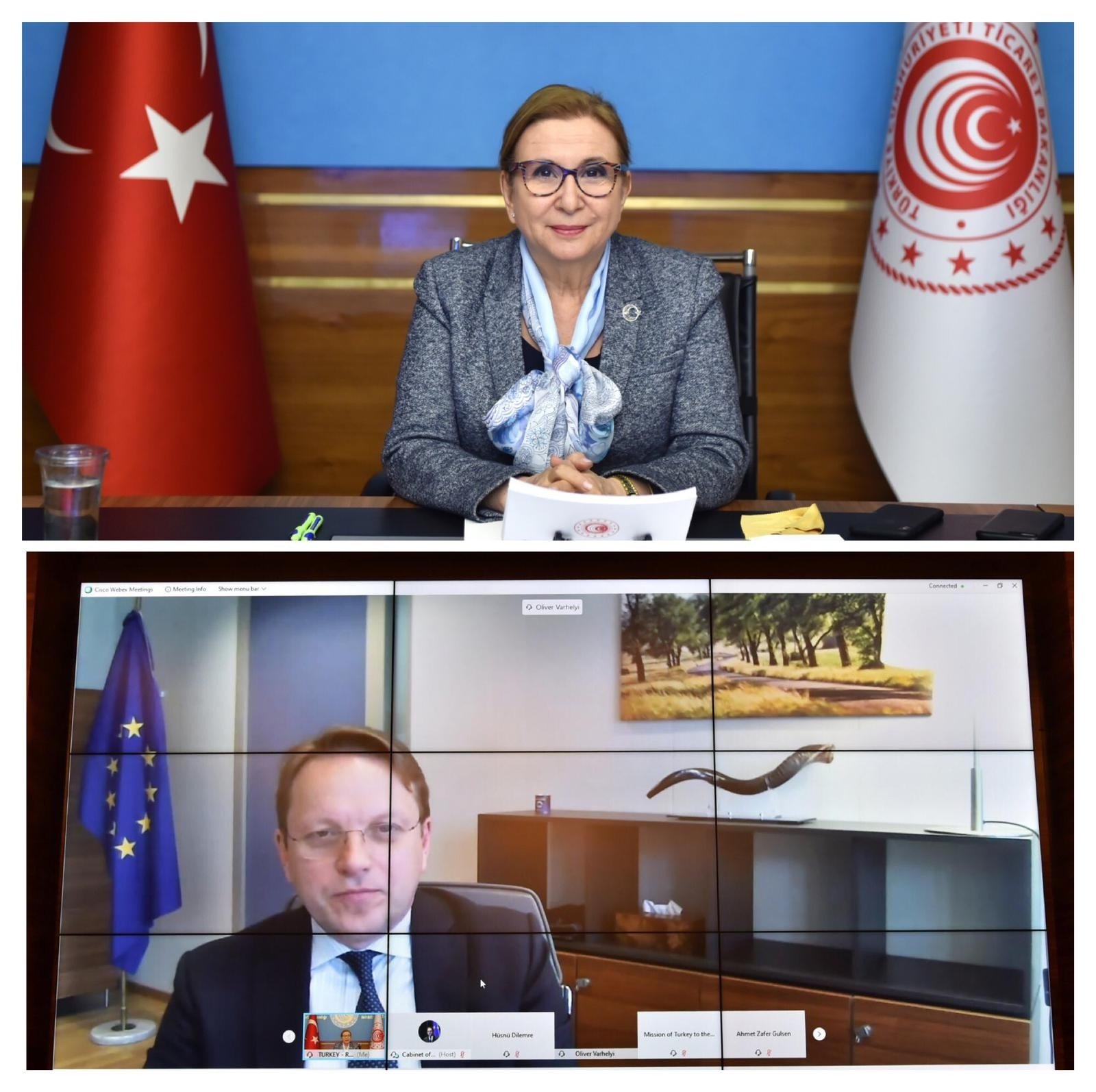 Turkey has once again stated that the current customs union with European Union lags in answering today's necessities, with officials stressing that modernization of the deal would benefit both sides.

Turkey’s Trade Minister Ruhsar Pekcan and European Neighborhood and Enlargement Commissioner Oliver Varhelyi both stressed that they were ready to work towards a more positive agenda, according to a statement issued Wednesday.

Updating the customs union with the EU is a “key element” for making progress in ties, Pekcan told the virtual meeting with Varhelyi, during which the officials discussed bilateral ties, including trade matters and cooperation.

“On every occasion, we emphasize that our strategic goal is full EU membership,” the minister said. “We approach our relations with the EU with this understanding.”

There are many opportunities for a positive agenda in Turkey-EU ties, she stressed, expressing readiness to boost related efforts.

Varhelyi noted that the EU also strives for a positive agenda with Turkey.

“We see it as beneficial for both sides to continue their joint and constructive work for this agenda,” he said.

President Recep Tayyip Erdoğan himself also vowed Turkey’s commitment to improving relations with the EU over the last two months as he reiterated that Ankara prioritizes the EU in its agenda and sees its future in Europe.

Erdoğan said Turkey hopes to start afresh with the bloc in the new year. Interactions with the EU in 2020 were unproductive due to the artificial problems created by certain EU members, the president said last month.

The customs union relationship, one of the stages of the full membership process, has enabled multiple mutual gains to date, Pekcan said. But, she reiterated that the current structure no longer sufficiently meets today’s requirements.

Varhelyi also confirmed that the modernization of the agreement would yield positive results for both sides. He recalled that the matter was submitted to the approval of the European Union Council.

Turkish and European officials have over the last couple of years carried out talks on revising the current deal. Although the talks have been stalled as a result of political tensions, business circles and officials on both sides have endeavored to maintain dialogue.

Pointing to the importance of expanding the agreement to include new areas such as e-commerce and services, Pekcan said the business community in EU countries also supports this process.

Along these lines, she pointed to the EU Leaders Summit this March, where concrete steps are expected to be taken.

Regarding EU rules on steel products, she said its measures should be revised according to the agreements and spirit of partnership between the two parties.

“The EU should adopt an approach worthy of the importance of bilateral relations, and the obstacles to the introduction of Turkish steel to the EU market in accordance with competition rules should be removed,” the minister said.

Pekcan also evaluated the effects of the European Green Deal on the customs union, stressing that the steps the EU takes in this context should not turn into protectionism but instead focus on developing cooperation that will contribute to the EU’s strategic goals.

As a membership candidate and customs union partner of the EU, “it is critical for Turkey to have access to funding created for green transformation,” she said.