Once its strength, network of rivers, canals now threaten Germany 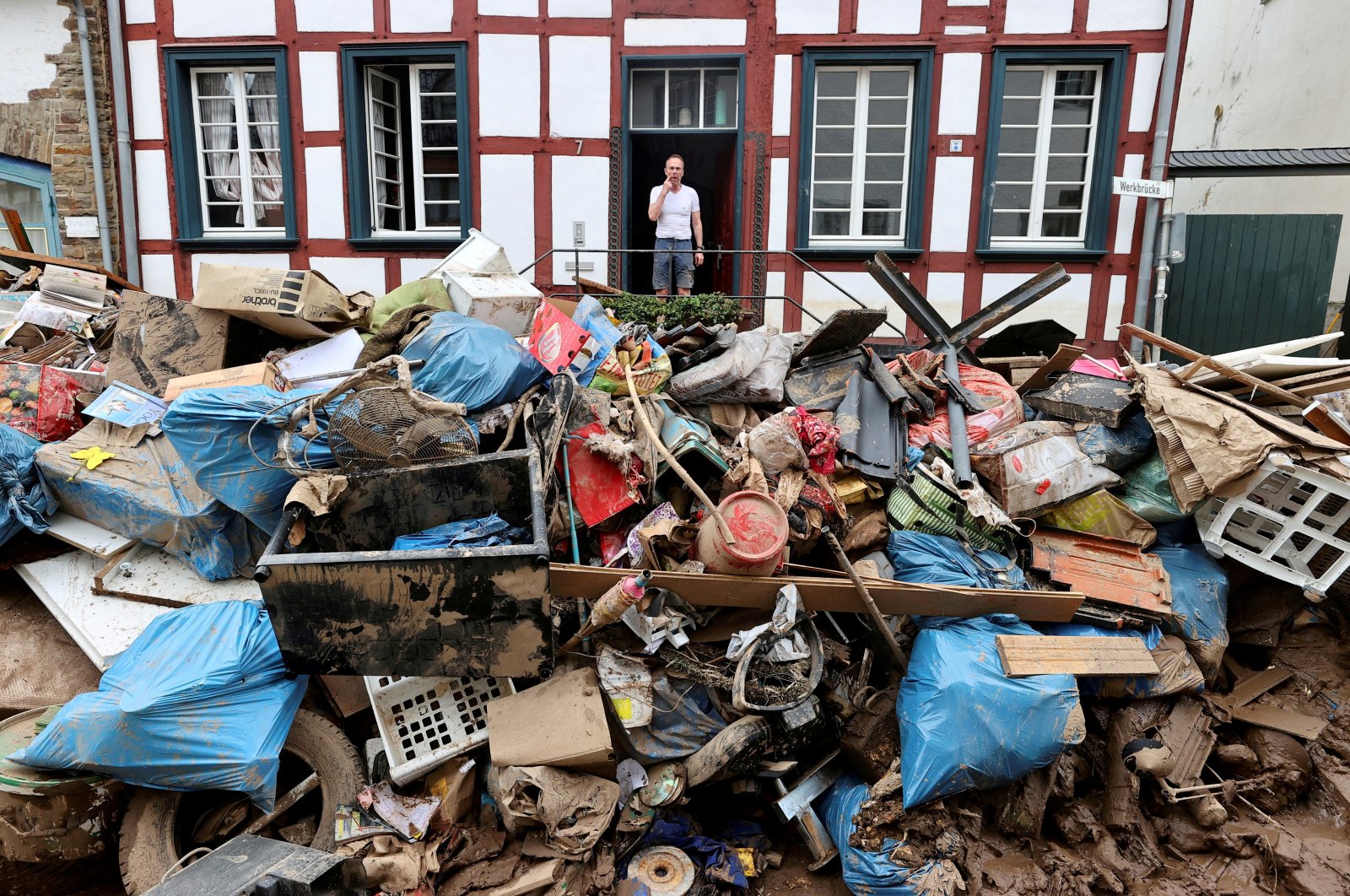 A man looks on outside a house in an area affected by floods caused by heavy rainfalls in Bad Muenstereifel, Germany, July 19, 2021. (Reuters Photo)
by REUTERS Jul 23, 2021 12:44 pm
RECOMMENDED

Bad Muenstereifel's transformation from a picturesque but sleepy German tourist town into an outlet shopping center put it on the map for millions of visitors.

Then floods laid waste to its medieval streets and half-timbered buildings, highlighting the vulnerability of Europe's top economy to an increasingly unpredictable climate.

Beyond the town, the flooding stretched from an area close to the western city of Cologne down to southern Bavaria, hitting the historic centers of Aachen and Trier and leaving a trail of destruction behind it.

In recent years, other heavy floods have hit other parts of Germany, overflowing the banks of the waterways that have played such a key role in its prosperity.

Those floods have caused tens of billions of euros of damage – a much bigger economic hit than any of Germany's neighbors have suffered from inundations, according to a study by Swiss Re, which insures insurers.

In Bad Muenstereifel, the focus was on the immediate damage. As scores of soldiers passed orange buckets of debris and sludge, Marita Hochguertel recalled the town's revamp after 2014, when an investor brought in dozens of outlet shops to fill empty storefronts.

Visitors more than doubled to 2.5 million a year, sparking a renovation boom, said Hochguertel, who has worked for the town government for 42 years.

"It brought life to the town," she said outside the council building as muddy crews worked with bulldozers to clear wreckage, from broken chairs to the stray legs of mannequins.

Rubbish piles grew bigger as the day wore on. The smells of diesel-fuelled water pumps and dust polluted the air. A crushed car lay lodged sideways in the narrow river.

The images have shocked Germany, prompting a debate ahead of national elections that could loosen the hold on power of Chancellor Angela Merkel's Christian Democrats and bolster the Green party.

Much of Germany's industry, including metals giant Thyssen Krupp and chemicals giants Bayer and BASF, developed in centers close to waterways such as the Rhine – which was also impacted in the recent flooding.

The network of rivers and canals remains the most extensive in Europe and is used to move around 200 million tons of freight each year, from grain to coal and oil. But it is fast becoming a threat.

These were the third major floods to hit Germany since the turn of the century.

In 2002, the Elbe river flooded, affecting Dresden and other cities. In 2013, floods hit Bavaria hard along the Danube and Inn rivers.

Damage for both years totaled 42 billion euros, and less than a quarter of it was insured, according to Swiss Re.

July's floods are set to be Germany's costliest ever, according to the German Insurance Association, which estimated claims alone at up to 5 billion euros.

The total cost, with torn roads, train tracks and phone lines, already seen in the billions, will far outstrip that.

ICEYE, which monitors flood zones for insurers using satellite images, estimates that more than 37,000 German buildings have been affected by the floods in July, compared with fewer than 1,700 in the neighboring Netherlands.

Even before this most recent catastrophe, Swiss Re estimated the economic cost of flooding in Germany in recent decades at more than twice that of France or the U.K.

But public debate in a heavily industrialized country that relies on diesel cars, machinery and other goods to prosper, has been muted among large parts of the population.

That may be about to change.

Anders Levermann, who has advised the German government on the climate, said he feared that floods could upend the economy and political order if they become much more common events.

"What will happen if weather extremes become so frequent that we don't have time to recover in between?" he said. Germany's role as exporter means that supply chains across the globe could also be at risk, Levermann added.

In the Netherlands, where roughly half the country is below sea level and where they have spent centuries holding back water, planning has been ongoing for decades. It fared better in the recent floods.

"We've been anticipating this for a long time," said Marjolijn Haasnoot, a Dutch climate scientist.

"This amount of flooding will occur much more frequently ... because of climate change."

The Dutch are also slowly embarking on a debate that may have to be had in Germany – over whether they should just surrender land to advancing water.

"A lot of people think they can protect everything with dykes. What they don’t realize is that seawater is seeping inland under the dykes," said Maarten Kleinhans of Utrecht University.

"In the long term, half of the country is under threat," he said, of Holland. "We’ve seen it in the past – that villages and towns were washed away or disappeared into the ground. You can build sea walls to defend the cities, but you can’t do that everywhere."

In Bad Muenstereifel, Michael Starkel, a hotel owner and head of the local business association, fears people will pack up and not return.

"I've talked to many people in the old town who really have thoughts to leave," he said during a break from helping the cleanup crews clear riverbeds of tree trunks and other detritus.

If history is any indicator, people in the disaster zone are in for a long slog.

Deggendorf, a town of 37,000 residents in Bavaria hit by floods and a dam break in 2013, is still recovering, Viola Muehlbauer, the head of the mayor's office, said.

"It will surely be a very, very long process until everything is back to normal."